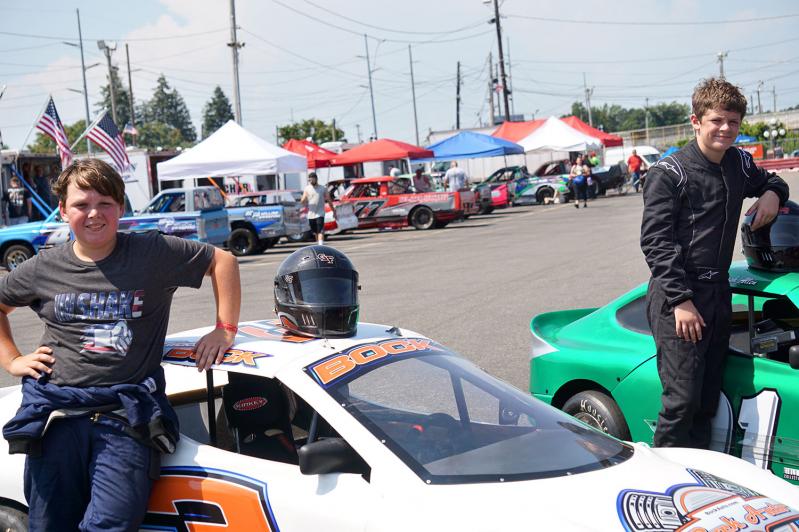 Tucker Bock and Austin (Crash) Allen are learning the ropes at the Riverhead Raceway on Saturday nights.
Abbey Allen
By Jack Graves

Austin Allen and Tucker Bock have been "best friends since we were born," Tucker said during a recent interview concerning their nascent race car careers, which are being nurtured this summer at the Riverhead Raceway.

Tucker, 12, raced a go-kart at Riverhead when he was 4, but soon after that go-kart racing there was discontinued, and for the past half-dozen years the boys had to content themselves with bicycles and video racing games. But then, this summer, Riverhead added a Bandolero division for 8 through 14-year-olds at the quarter-mile oval track.

Bandoleros, "a scaled-down version of a race car," according to Erick Bock, Tucker's father, have sleek fiberglass bodies, steel-tube chassis, and are powered by 30-horsepower, 2-cylinder Briggs & Stratton lawn tractor engines in the rear that top out at 70 miles per hour (though a restrictor plate altering the air flow can tone it down a bit).

There are hydraulic brakes in the rear, as well, connected to the rear axle, but the idea is not to use them when racing, if you possible. And there's just one gear.

"They're learning -- everybody in the division is," said Austin's father, David Allen, who takes care of the East Hampton Town Police Department's vehicles. Erick Bock owns the Bock Auto Shop at the Shell station in Amagansett.

"At the first race, there were seven or eight cars, the last time there were 17, and at this one coming up there will be 27," David Allen said of a July 17 race. With his son's help, he sets their car up before the Saturday events, though alignment and suspension adjustments usually have to be made at the track as well, given the changing conditions.

Tucker is getting hands-on experience too. "That was part of the deal," said Abbey Allen, Austin's mother.

The Allens have two used Bandoleros in their garage, a green one that Austin (Crash) Allen races, which cost $5,000, and a spare, which cost about $3,500.

Asked why the spare car, Abbey Allen smiled and said, "I don't know -- I get different answers. . . . Don't forget to say we're always looking for sponsors."

As it is, Crash Allen, who will turn 12 on Aug. 11, can count among his sponsors Riverhead Building Supply, the Springs General Store, and Bono's Mower Repairs.

"I bought the car during the pandemic so I'd have enough parts," David Allen said when asked about the spare car during a separate conversation.

Bandolero racing is a family-friendly sport, said the fathers, who are planning trips to Bandolero races in Connecticut, Pennsylvania, and Massachusetts this fall, and, perhaps, to North Carolina (where the cars are made) this winter.

Besides their fathers, the boys, who are to enter seventh grade at the Springs School in September, have mentors in the older drivers -- among them Cory Midgett of East Hampton -- who race open-wheeled Tour Modifieds at Riverhead.

Saturdays at the Raceway are "pretty cool," said David Allen. "They do the national anthem. The kids are racing along with Tour Modifieds -- they get to see 'the big boys,' as you say. They're in the same pits, they talk to you . . . . The older drivers are all very supportive. It's like Little League -- they want to see the younger ones carry it on."

Asked what it was they loved about racing, the boys said in unison, "Going fast."

The friendly competitors tend to follow different "lines" when racing, with Tucker generally going high on the banked curves and, with gravity's help, plummeting down before getting pushed out high again at the apex, and with Austin keeping fairly close to the inside edge all the way around, but, ideally, not so close as to spin out.

When told his son wanted eventually to be a Nascar driver, David Allen said, with a smile, "It's like wanting to be a pro baseball player. . . . We'll see."

"Once racing's in you it never leaves," Tucker said, beaming.

Austin was the runner-up and Tucker finished sixth in separate Bandolero races at the raceway on July 17. They are to race in Riverhead again on Aug. 14 and 24 and on Sept. 4.