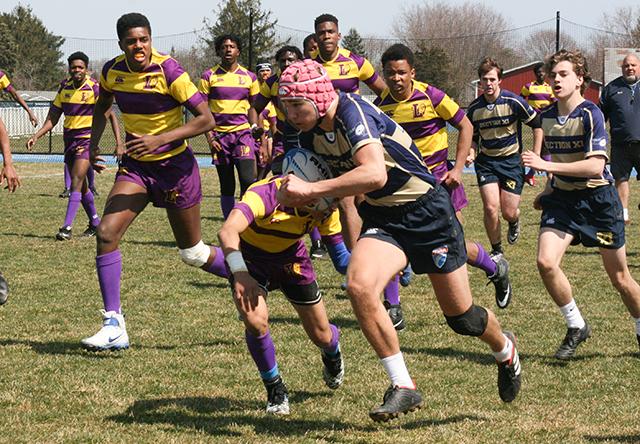 Kevin Bunce Jr., who is to play in an international youth 7s tournament in Orlando, Fla., next week, scored two tries and made good on half a dozen conversion kicks at Mattituck High School Sunday.
By Jack Graves

The Section XI Warriors, a youth rugby team coached by Kevin Bunce and Mike Jablonski, both of whom used to play for the Montauk Rugby Club, routed Bishop Loughlin’s less experienced but no less athletic 15s side at the Warriors’ home field at Mattituck High School Sunday.Made up of high school-age players, a number of them wrestlers, from throughout eastern Long Island, including three players from East Hampton — Kevin Bunce Jr., a back who was the best player on the pitch Sunday, Nick Lavelle, a bruising prop forward, and Nick Lombardo, the number-eight man — the Warriors, who are 2-0 in interscholastic play at the moment, face Rockaway in Mattituck this Sunday. Discussing the 65-29 win afterward, the elder Bunce, while acknowledging that Bishop Loughlin had “made a lot of progress” under its new coach, Aaron Bull, a flanker for Old Blue, observed that his and Jablonski’s charges were now playing “a passing and catching game,” while the visitors were playing “a running game.” In other words, trying to run through a whole team in rugby ordinarily won’t get you that far.Bull, who is in his first year coaching at the 168-year-old Brooklyn Catholic school, where rugby was, he thought, the second most popular sport behind basketball, said afterward that there was work to do when it came to more fluidly executing the game’s various phases. “We’re not playing up to our ability yet — we need to pass more, support more, tackle better, and we need to have better line speed,” Bull said.When Bishop Loughlin’s side does play up to its ability, watch out.Meanwhile, as aforesaid, the Warriors were the dominant team on that sunny day, pushing forward, often with the 250-pound Lavelle leading the way in flying wedge fashion, from the get-go.Kevin Bunce Jr., who is to play in an international youth 7s tournament in Orlando, Fla., next week, put the Warriors on the scoreboard with a 20-yard try six minutes into the fray. His points-after drop kick, taken from near the left sideline, bent just wide to the right, though he was to go on to make just about all of his conversion attempts thereafter.Bishop Loughlin’s subsequent kickoff, which sailed through potential receivers’ hands, was retrieved by the visitors, who pushed toward the endline, with Sherlon Boothe, the hooker, capturing a Warrior fumble and touching the ball down just over the line moments later.Three tries soon after, by Chris Vetter, Bunce, and Dylan Anderson, extended the Warriors’ margin to 21-5, and before the first half was over, Vetter and Anthony Senft had sandwiched two more scores around a 60-yard try by Bishop Loughlin’s Cyrus Blake, the outside center.Bishop Loughlin’s athletic director, Angela Proce, said during halftime that students at the Fort Greene neighborhood school, which does not have football or wrestling — though there is lacrosse — had taken to rugby. “I was lucky I found him,” she said of Bull, who, as aforesaid, is in his first year of coaching. Bishop Loughlin, she said, began fielding a rugby team, 7s to begin with, two years ago.The Lions, despite being a man down because of a collarbone injury that was to sideline Blake early in the second half, came roaring back when the second period began, on tries by Zach Sanchez and Blake, which narrowed the Warriors’ lead to 31-24 before the home team regained its footing and closed the rout out with a 29-5 run.Bunce, Craig Jablonski, and Vetter finished with two tries each for the Warriors, and though he didn’t score, Rob Lechner, a forward from Mattituck, was a force to be reckoned with. Boothe, Blake, Andy Deslanses, and Sanchez were the Lions’ scorers.The Warriors’ scoring aside, “We played good defense — our wrestlers were tackling nice and low,” said the elder Bunce. “That was the key. And we were rucking over the ball — our support was there — and when it came to passing, we were unselfish.”Some of his and Jablonski’s charges could improve their stamina, he added. “These teams we play practice five times a week — we practice three days a week. So our guys have to do a little more on their own.”