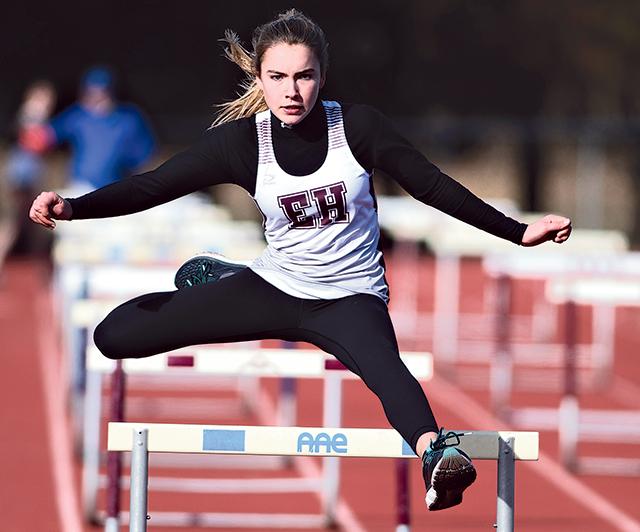 Grace Brosnan, a Pierson ninth grader, won the 110-meter high hurdles and was second in the high jump in the April 3 girls track meet here with Sayville.
By Jack Graves

An anticipated mandatory nonleague match between the Commack and East Hampton High School boys tennis teams was rained out Friday, and apparently won’t be rescheduled, though the two teams may meet in the county team tournament next month.Kevin McConville, East Hampton’s coach, expects that Commack, which was 6-1 over all as of Monday, will get the top seed in that tourney, with 7-1 Hills East, which handed the Bonackers their sole loss of the season recently, at 5-2, getting the second seed, and East Hampton, which was 7-1 over all as of Monday, getting the third.East Hampton pretty much assured itself of a second-straight league championship by winning 4-3 at Westhampton Beach last Thursday. The Bonackers had won 7-0 here, though it was a competitive 7-0 match. This time, said McConville, Westhampton’s coach “played it straight up. . . . His third and fourth singles players were at first doubles the last time.”Josh Kaplan, the Hurricanes’ number-one, who had lost to Jonny De Groot in a third-set super tiebreaker at East Hampton, defeated De Groot 6-2, 6-2 this time, thus assuring himself, McConville said, of the top seed in the division individual tournament next month.In other matches at Westhampton, Ravi MacGurn, at two, and Luke Louchheim, at three, won in straight sets, and the first and second doubles teams — Jaedon Glasstein and Alex Weseley and Brad Drubych and Matthew McGovern — won as well. Since Jamie Fairchild and Miles Clark were missing that day, McConville played “two subs,” John Jiminez and Jackson LaRose, at third doubles. They won the first set 6-2, but lost the next two by scores of 6-4 and 6-3. Max Astilean lost 6-3, 6-4 at fourth singles to Santo Benenati, who had played second singles the first time around.McConville said he thought Westhampton’s coach figured Kaplan would win and that his doubles teams would sweep East Hampton’s in the teams’ first meeting.As for De Groot, “he was broken in the first game of the first set after half-volleying a return hit at his feet deep to Kaplan’s backhand corner — just what we want. But then he missed two high volleys and let another go, only to see it land in the court.”“I don’t mind him missing volleys, for that’s been our strategy with Josh — to chip returns to his backhand and come in, to dare him to make fantastic passing shots.” But unforced errors ultimately did in De Groot, who played on that day into the Westhampton baseliner’s hands.A number of his players took a while to get in sync after the bus ride, McConville said. “Ravi was down 5-4 before coming back to win 7-6, 6-2 . . . first and second doubles lost their first sets before getting it together.”As of Monday East Hampton had four regular-season matches left, with Shoreham-Wading River, Mattituck, Southampton, and Southold, teams it defeated handily in their initial meetings.As of Monday, he said, Commack, Hills East, and East Hampton each had one loss.Girls TrackTurning to girls track, Yani Cuesta, East Hampton’s coach, said her charges had done creditably in an 86-63 loss here to Sayville on April 3.East Hampton’s winners included Grace Brosnan, in the 100-meter high hurdles; Mimi Fowkes, in the 1,500-meter racewalk; Bella Espinoza, in the pole vault; Helen Barranco, in the discus, and the 4-by-800 relay team of Bella Tarbet, Penelope Greene, Emma Hren, and Ava Engstrom.As for the runners-up, Ashley Peters was second in the 100, in 13.5 seconds, a season best, and second in the 200, at 28.3, also a season best.  Engstrom was second in the 800 and 1,500 — her 1,500 time of 5 minutes and 10.2 seconds being a season best. Tarbet was second in the 3,000, in a season-best 12:30.5. JiJi Kramer was second in the racewalk; Borzilleri was second in the long jump, at 14-4; Jen Ortiz was second in the triple jump, with a hop, skip, and leap of 29 feet 111/2 inches; Brosnan was second in the high jump at 4-6, and Tifany Gomez was second in the shot-put, in 24-2, a personal record for her.Third-place finishers included Lillie Minskoff, in the 100; Greene in the 800; Borzilleri in the 400 intermediate hurdles; Espinoza in the high jump; Barranco in the shot-put, and Elizabeth Camacho in the discus.Concerning the 4-by-800 relay, Cuesta said, “Sayville was leading until Ava caught Sayville’s anchor coming around the curve of the last lap and pushed on for an exciting win.”The Bonackers were to have vied at Wyandanch Monday, in a meet that Cuesta thought East Hampton would win.