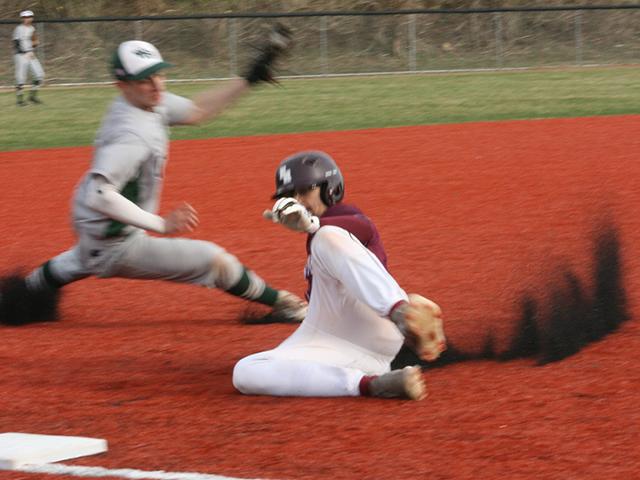 Elian Abreu, who singled with two outs in East Hampton’s third inning, advanced to third base on a double by James Foster, and, moments later, scored on a base hit by Zach Barzilay.
By Jack Graves

Don’t look now, but East Hampton High School’s baseball team is in first place, for the first time in a long while, however brief the stay may turn out to be.“It’s going to get much harder from now on, but if we continue to get the pitching we have been, we should be competitive with anyone,” Vinny Alversa, the Bonackers’ head coach, said after his team’s impressive 14-1 rout here Friday of Westhampton Beach, a big win that completed a League VI series sweep that began on April 9 with a 5-2 one-hitter by Jackson Baris and a 3-2 win the next day.As for Friday’s game, Tucker Genovesi, the leadoff hitter, led it off with a home run over the left-field fence.Kurt Matthews, who gave up just two hits (one of them the result of a misplayed fly ball), was in command the entire way.East Hampton made it 3-0 in the bottom of the third. After Genovesi had grounded out second-to-first, and Matthews had struck out swinging, Elian Abreu singled, and James Foster, the cleanup hitter, doubled to left, sending Abreu to third. Then Zach Barzilay drove both runners in with a clutch single.Baris, the next batter, also doubled, but Austin Brown, the second baseman, grounded out second-to-first to end the inning.The visitors scored their sole run in the bottom half, the result of a misplayed fly ball in the outfield and an infield throwing error with two outs. The fourth inning proved to be the big one for the Bonackers, an inning in which they scored seven runs, effectively putting the game away.Colin Ruddy, the freshman first baseman, who led off, was thrown out on a topper hit toward the mound, but then Westhampton’s pitcher, who had not been wild theretofore, gave up two walks. A single by Matthews loaded the bases. Abreu’s popout to second brought up Foster, who, with two outs and the count 1-1, was hit by a pitch, forcing in a run. Barzilay, who followed Foster to the plate, was also hit by a pitch, with the count 1-2, plating East Hampton’s fifth run. At that point, Westhampton brought in a reliever. But he was to fare no better. Baris, with two strikes on him, scorched a line drive over the third baseman’s raised glove that landed fair by a foot or two and plated two more runs, for a 7-1 East Hampton lead. A subsequent errant pickoff throw to first with Brown at bat made it 8-1, and a base hit by Brown extended the margin to 9-1.When East Hampton put its 10th run up on the scoreboard, the Hurricanes changed pitchers again, which, after another walk, resulted in Matthews grounding out third-to-first with the bases loaded.Matthews himself experienced some wildness in the top of the fifth, walking two batters and unleashing a wild pitch, but with runners at second and third and two outs, he induced the number-three hitter to pop out to Baris in left.Westhampton’s reliever struck out three straight Bonac batters in the bottom half — Abreu on a slow curve, Foster on a called third strike, and Barzilay swinging.Henry Garneau, who had come in off the bench to play left field, made a nice one-handed catch of a foul fly ball for the first out in Westhampton’s sixth, and, following another infield error, Matthews retired the side on a fly ball to center field and a ground ball to third.Garneau drew a walk to lead off East Hampton’s sixth. A strikeout ensued, but, with Charlie Ruddy, who’d also come off the bench, at bat, Garneau moved up to second on a wild pitch, and came home on a base hit by Ruddy. With Lou Britton up, Ruddy, who had advanced to second, came home when Britton outran an errant throw to first after striking out.Not long after, Abreu drove in two more runs for the 14-1 final.When asked when the last time was that an East Hampton baseball team had swept a series, Alversa replied, “Last year, against Amityville.”Still, series sweeps have been rarities in recent years, and, as aforesaid, it’s hard to remember when an East Hampton baseball team led its league. It’s League VI in this case. Shoreham-Wading River, a League VII team, was to have played a nonleague game here yesterday.