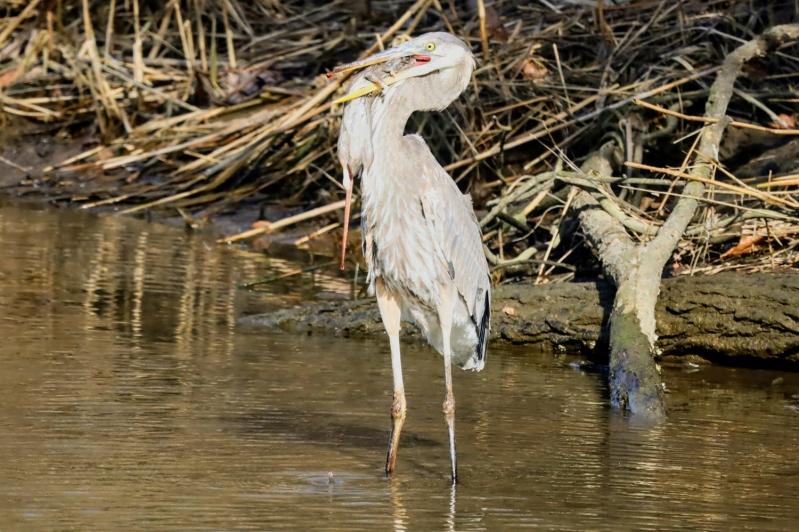 A great blue heron at Pussy’s Pond in Springs choked down a muskrat. Herons are usually around water, but they eat more than just fish.
Noreen Bradley
By Christopher Gangemi

After the last couple of weeks, with the war in Ukraine edging out the pandemic to capture everyone’s fright, I thought it would make sense to talk about a particularly skittish bird, the great blue heron.

The great blue heron is the largest heron in North America. While it’s not our only winter heron (black-crowned night herons roost locally all winter), it’s the only one you’re likely to see. It has long legs and a long serpentine neck. To my eye, despite its name, it’s more gray than blue. It has a bright white cheek, black stripe over its eye, and shaggy off-white breast feathers. Its large bill is alarming, especially paired with its powerful neck.

The great blue heron is easily disturbed. James Audubon, in his “Ornithological Auto­­biography,” de­scribed the heron as “extremely suspicious and shy.” “Unless under very favorable circumstances,” he said, “it is almost hopeless to attempt to approach it.” For this reason, you will often see great blue herons flying away, low over a marsh or pond. Odds are, they sensed your presence and took off. Watch them when they fly, their two-toned wings pushing slow and deep as they make their escape.

The Native American Hitchiti tribe of the Southeast noticed the flight of the great blue heron too and added it to their folklore. They pitted the hummingbird in a four-day race against the heron, the winner of which would own all the fish in the rivers. It’s a bit like the tortoise and the hare. The hummingbird gets distracted by all the pretty flowers along the way. So, to catch up with the heron, it must zip along at an unsustainable pace, and it needs to rest at night. The heron, with its paced, steady flaps, never needs to stop and ultimately wins the race.

Good thing too, because it’s hard to imagine a hummingbird eating a fish.

Mary Oliver said great blue herons “stand like columns of blue smoke in a winter marsh.” Viewed from a distance, they’re quiet and still. But don’t confuse that with being peaceful and chill. Remember, they have a big yellow knife attached to their face. These are intent stealthy hunters. They walk slowly through the water with great care. Skittish fish are difficult to fake out, and while they are the staple of the great blue heron’s diet, that diet is varied.

For example, while researching this article, I found a video on YouTube with nearly a million views of a great blue heron efficiently hunting gophers in a field. The music was edited in a creepy horror-film sort of way, the heron stalking, and then staccato violins just before it stabbed its prey. They also eat rats, muskrats, frogs, reptiles, and even marsh birds. These birds are ruthless.

The internet has made the heron famous for videos that show it biting off more than it can chew. Watching the heron swallow prey that seems much too large can be gross but also entertaining. Its throat distends and you can see the body of the larger animal or fish go down in a cartoonish way.

The downside to their eyes sometimes being larger than their stomachs, or, in this instance, throats, is that they can underestimate the size of their meal and choke to death on it.

Despite its murderous tendencies, this is a great bird for children to enjoy, a potential spark bird. It is large, dramatic-looking, and easy to find this time of year. They’re regular at the head of Georgica Pond, Hook Pond (I counted nine there on a single day in January), Cedar Point, Long Pond in Sag Harbor, and at Sagg Pond (where I had my all-time high count of 39 one autumn morning in 2020).

These birds are almost always solitary on Long Island, where they do not breed. According to John Bull, in his “Birds of New York State,” they last bred here in 1900, on Gardiner’s Island. You can find some non-breeding herons throughout the summer, but they get particularly scarce in June, July, and August. They head upstate where they breed in large “heronies,” mostly up near the Finger Lakes.

In the same account where Audubon mentions the beauty of watching the heron hunt, he talks about visiting their breeding grounds and shooting them out of the sky. He was in Florida, with some buddies. “I shot one of these birds, and on opening it on board, found in its stomach fine perch quite fresh, but of which the head had been cut off. The fish, when cooked, I found excellent.” He was with a few guys who he calls out by name. Lieutenant Percy ate the “stomach perch,” and Mr. Ward ate some too. But Mr. Leehman, “would not so much as taste it.”

I imagine Mr. Leehman going home and telling his wife about his weekend with the boys. “Crazy James Audubon peer-pressured everyone into eating a dead fish from a heron’s stomach,” he’d say. Something tells me that was the last time Mr. Leehman hung out with Audubon.

Audubon was killing the birds and studying them, but many more were killing them for their feathers. In the late 1800s, five million birds were killed yearly to satisfy the demand of the hat trade. It wasn’t until the Migratory Bird Treaty Act of 1918 that killing herons for their feathers became a crime.

Feather hats aren’t a thing anymore, except in some deeply hipstered pockets of Brooklyn. So, what’s threatening great blue herons now? The usual: habitat loss. And, well, I guess a potential nuclear war. Sun Ra, anyone?

Speaking of great blue herons, on Saturday, Dermot Quinn counted 28 at the head of Georgica Pond in Wainscott. Meanwhile over at Foster Memorial Beach in Sag Harbor, Margarette Doyle saw a horned grebe. I happened to spot a quite rare, pink-footed goose embedded with 600-plus Canada geese at Sayre’s Park in Bridgehampton. At Cooper’s Neck Pond in Southampton, a local birder spotted 29 northern shovelers, very cool ducks. Jo Ann Secor spotted a couple of yellow-rumped warblers at her suet feeder, and an adult bald eagle on Long Pond in Sag Harbor.

Finally, Jane Bimson spotted an osprey eating a fish on her front lawn on Monday afternoon. They should be showing up in force over the next few weeks.

See any cool birds? Let me know at [email protected]. It beats getting your name in the police blotter.