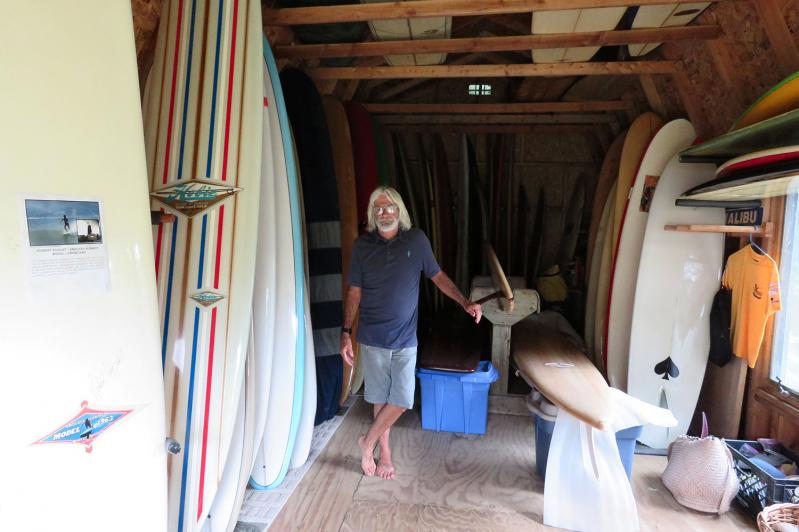 Asked what it was he loved about surfing, Tony Caramanico, a Montauker who was recently inducted into the East Coast Surfing Hall of Fame, said, "Its sense of freedom . . . it's athletic, but soulful. It's hard to say it's this or that -- it's a sport and a lifestyle . . . it's been my life."

And it has served him well. The inductee, who as a professional surfer won in his 40s and 50s numerous championships in five countries, Japan and Costa Rica among them, moved from Amityville to Montauk in his 20s, and stayed. He sees the sun set every night from where he lives, across the street from the Montauket restaurant, and though he rises early, sometimes before dawn, he doesn't rush. "I'm a fair-weather surfer now," he said during a telephone conversation last Thursday.

And while, at the age of 70 -- and still sponsored by major companies -- he's not what he used to be, he still surfs most days, as does his wife, Charlotte. "You try to get back what you're losing," he said. "I was really good. . . . You take it as philosophically as you can. Though I'm no longer finely tuned, I still love it."

"All of us, my friends and I, came out here because of the waves -- for all the rocks and coves. The rocks curve the waves. West of Ditch Plains, it's all beach breaks and jetty breaks. Montauk's a point break -- the waves follow the contour of the land. Sand moves, rocks don't move, so you get those long, beautiful long waves. It's some of the best surfing on the East Coast."

And the East Coast surfers, he added, were just as good as the West Coast ones. "Kelly Slater, the 11-time world champion, comes from Cocoa Beach in Florida. We have smaller waves, but we try harder. . . . Knowing how to ride smaller waves makes it easier riding big ones."

Ditch Plain had always been popular, he said, "though it was nothing like it is now. I used to be the only one giving lessons there and one of the few longboarders. Now, you'll see 50 to 60 longboarders, and there are 15 to 20 instructors. There's not a parking space left after 8 or 9 a.m. It's insane. It's basically been commercialized. . . . Montauk is Malibu."

Still, despite all, Ditch Plain was "family-oriented, very mellow -- it's not a battlefield. There's not that brutal localism you find in some places."

And Montauk in general? "Guys in my generation who came out here for the waves and who went into the fishing business and the restaurant business," as he did as the owner of the Albatross for a while, "did well in marketing Montauk's charm. And then," he said, "it became hip."

Montauk was "still great," but the insurgents might well destroy it. There'd been a brief respite early on in the pandemic, when the place was busy yet peaceful, and when you could drive to Southampton without getting caught in the trade parade, but things have been coming back quickly in recent weeks. One thing for sure, "I couldn't afford to live here now."

For the first time this year, Hall of Fame nominations were solicited from the public, rather than from the powers that be. Caramanico, who won his first surfing contest in 1969 in Jacksonville, Fla., was one of 10 -- five of them Floridians -- singled out for this honor from a list of 200, inductees who were cited for "having made the most significant contributions to the sport, thereby preserving their historical significance and the sport's cultural lore for future generations."

As aforesaid, surfing has been his life. Joel Tudor Surfboards manufactures his model, as did Greg Noll, Channin, Surftech, and Phoenix in the past; he has over the years sold "tons" of surfboards, continues to collect antique ones dating to the 1950s and 1960s -- replicas of boards ridden in the film "Endless Summer" are in his valuable collection -- and prints from the illustrated journals he's created while in some of the world's most beautiful places have been displayed in museums, shows, and galleries. The Indy Home Design company in Montauk sells his artwork and art surfboards.

Caramanico has also been a mentor to young surfers -- R.J. Bimson, Zack Raffin, Jesse Rabaglia, and Noah Avallone to name a few.

Avallone, a part-time Montauker who's 12, and who is following in Shaun White's footsteps when it comes to snowboarding, not long ago won an Eastern Surfing Association menehune longboard championship in Nags Head, N.C., aboard his surfing mentor's model. Avallone, said Caramanico, had also won the sportsmanship award in that contest, for having helped a fellow competitor safely to shore after his leash had broken in heavy surf during a heat, after which Avallone "went back out and won."

Yes, he took his time now, said the interviewee. "I don't have to do anything I don't want to do. I've surfed so many waves. But it's still satisfying."