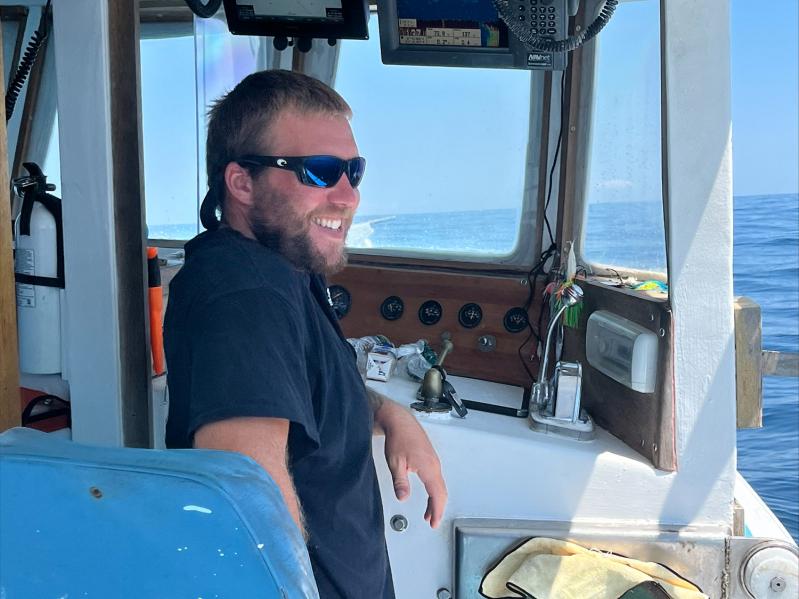 Capt. Tyler Quaresimo at the helm of the charter boat Simple Life out of Montauk.
Jon M. Diat
By Jon M. Diat

It was around 4:30 a.m. on Aug. 3, when we made a left turn to enter the entrance to the Montauk Marine Basin just off West Lake Drive for the commencement of a full day of offshore fishing.

Despite the excessive-heat warning from the National Weather Service, our intended quarry that day was a species that’s more recognizably caught in the bone-chilling winds and cold of winter: the iconic codfish. While known as the “winter king,” some cod can still be caught from the deepest waters off Montauk, even during the warmest months of the year.

It was still dark and eerily quiet in the parking lot that early morning, as sunrise was over an hour away. Removing our fishing rods and coolers of ice from the bed of the pickup truck, we sauntered over to near the fuel dock where the Simple Life, a 42-foot Bruno charter boat, was tied up.

“Hey guys, good morning,” said a voice in the darkness ahead. Not recognizing the greeting at first, we walked a little closer to the slip where the shadowy outline of Capt. Tyler Quaresimo could finally be made out. “Come aboard, we’re ready to shove off. We have a very long ride ahead.” His greeting was warm and sincere.

Our destination was the wreck of the Suffolk, a huge 365-foot freighter laden with a full load of coal that foundered and sank in a violent storm on Dec. 11, 1943. The wreck of the steel ship lies silently in 180 feet of water about 40 miles southeast of Montauk. Most unfortunate, all 37 people aboard the steamer perished that day. News coverage of the unfortunate event was scant in those days, as World War II was in full battle mode.

I unloaded my gear and, mindful of the many hours it would take to reach the wreck, went down to the forward cabin to relax and take a nap. The benign Atlantic Ocean seas made it easy to fall asleep again. Nearly three hours later, I was awakened by the sound of conversation and laughter in the main cabin. The five other anglers aboard were getting anxious to wet a line.

Quaresimo, who is only 25, has quickly built a very successful business in his mere four years of operation. That said, he certainly had the perfect mentor in his father Jamie, the longtime operator of the Miss Montauk II, an 85-foot open boat that fishes much of the year.

Tyler’s experience of working the deck of his father’s boat and having a true fishing intuitiveness clearly shows in his success at putting his fares on the fish, a task that’s not always easy. Very modest and humble, Quaresimo is already a well-respected captain around the harbor despite his young age. He clearly has fish in his blood.

“I love to fish and I’m very lucky to do what I do,” he said on the ride out. Asked why he named his boat Simple Life, Quaresimo smiled and said that “all I ever wanted was to have a simple life. And I really have that.”

Many may disagree with the young skipper that running a fishing boat is easy or simple. But Quaresimo is clearly content and satisfied with his life on the water. To top things off, in April he married his longtime girlfriend, Jessica, in Montauk, where they live. He is indeed enjoying his simple life.

“Okay guys, we are going to try some drifts first, so get ready,” he said to us from his helm station. While everyone decided to fish a traditional high-low rig baited with skimmer clams, I stuck with an eight-ounce diamond jig adorned with a teaser two feet above. I’ve always had good success with such a setup, and was hopeful that I had made the right choice.

The first drift was quiet, but we were entertained by numerous whales, mainly humpbacks that were breakfasting on the large amount of bait in the water. Also joining them were schools of dolphins and a few hammerhead sharks that swam lazily near the surface. It was a spectacle of nature.

Given the life in the area, we were also near a fleet of about 25 other boats which were on the troll in search of tuna. By the chatter over the VHF radio we could hear that the captains were dismayed that the tuna were not on the feed. It also appeared that the cod weren’t hungry either.

“I’m marking a lot of fish on my screen, especially at the top of the wreck,” Quaresimo pointed to his color fish finder. “But they are not biting.”

Over the next 30 minutes, we made several drifts near the wreck. I managed a throwback cod (in federal waters anglers can retain five fish between 22 and 28 inches), while another angler managed to put a keeper in the fish box.

“Reel ‘em up, we’re going to take a long ride closer to Block Island,” Quaresimo announced. About an hour later and in sight of the five windmills that lie to the southeast of Block Island, we dropped our respective rigs and baits into the overly warm 78-degree water.

Bouncing from spot to spot over the next five hours, I reeled in seven keeper cod, with an equal number of shorts thrown back. I also dropped about a half-dozen cod on the way up off the bottom. The action was consistent.

One of my companions ended up with four cod, after stubbornly switching over to a diamond jig. Quaresimo also moved to a jig and landed several keepers. However, those that stuck with clams on their hooks had less success that day. All told, the trip was a success.

“The metal clam was hot today,” Brian Damm, Quaresimo’s first mate, said on the ride back to Montauk, referring to my diamond jig.