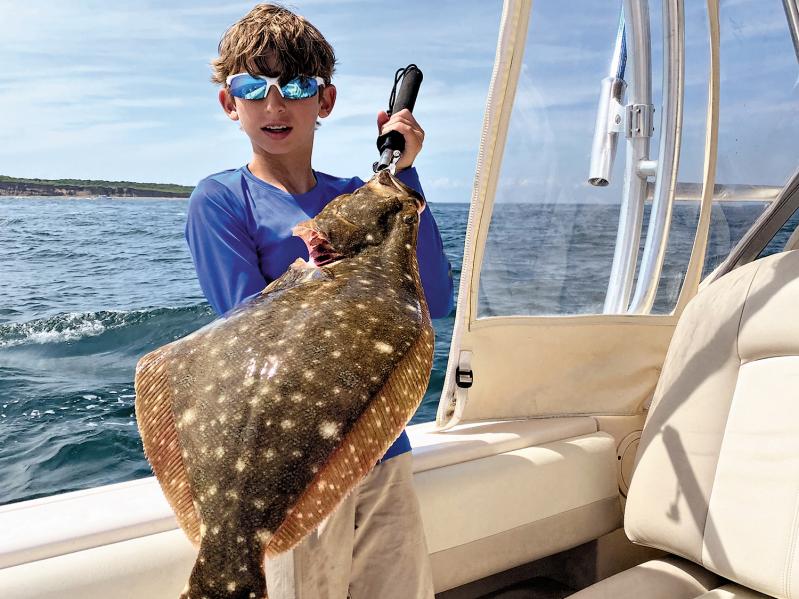 James Harber of East Hampton with a 10-pound fluke he caught south of Montauk on Sunday.
By Jon M. Diat

Beyond being overly stubborn, fishermen can also be a rather superstitious lot. Many have unusual habits or a routine that is indelibly ingrained based on past history — sometimes on fact but more likely fiction.

Stories of the big one “that got away” or a 20-pound striped bass that morphs into a 50-pounder are legendary when told with a beer in hand at the barbecue grill or bellied up to an overpolished mahogany bar.

Such tales, myths, and superstitions abound when it comes to boating and fishing: Always step on a boat with your right foot; don’t ever whistle, as the winds will only increase; never mention a pig’s name or a woman’s name; don’t say good luck, and never leave port on a Friday.

However, my personal favorite is the prohibition on taking a banana on board a boat. A banana? Let me illustrate.

With the cod clearly taking the day off, at around 11 a.m., my partner and I put our rods down and headed inside the heated cabin to grab a cup of hot coffee from the galley and a bite to eat. After I pulled a rather soggy baloney sandwich from my tackle bag, my partner decided that a ripe banana was the right thing to enjoy. I stared shockingly at his choice, as I put my sandwich back on the table. Before I could react any further, the screams started in the cabin.

“What are you doing?” shrieked Mavros Benis, the longtime chef, who manned the hot griddle in the galley opposite our table. “Put that away right now!”

My friend was paralyzed. Was this a joke? Was the banana poisoned?

“Don’t you know?” barked Benis, his brown eyes now bulging at my friend. The man was furious. This was indeed no joke. “Bananas are bad luck!” he said. “Throw it out and don’t let anyone else see it. Nobody catches fish when bananas are on a boat!”

Much like listening to someone ordered by a policeman to surrender a weapon, my guest, with a still very confused face, quickly put the yellow fruit back into his bag.

Benis, who probably also experienced similar incidents with other unsuspecting fishing fares in the past, was referring to the dreaded “banana curse,” a fishing myth that holds that bananas are never to be taken aboard a boat or shoreline (and certainly never to be consumed) when fishing or boating. No doubt, some folks take this matter quite seriously. Truth be told, I do too.

So, what’s the big deal with the lowly banana and a horrible day on the water?

The origin of this belief dates back to the Caribbean trade of the 1700s. The wooden sailing boats of that time had to move quickly to deliver bananas before they spoiled, and fishermen had a hard time trolling for fish on such fast-moving boats. Another story is that a banana-laden ship also came with snakes and deadly spiders nestled deep in the mountains of yellow fruit below deck, making life miserable for the sailors aboard.

Another superstition that originated during that time is that bananas will cause a boat to sink. This belief developed after many boats never made it to their destinations, and all of the doomed boats were said to be carrying bananas. Other such myths abound on why bananas are not a good thing when wetting a line or just being on a boat, for that matter.

And it’s not just fresh bananas that are thought to bring about bad juju. Some in the fishing business extend their distaste for the fruit to include not only bananas and food containing bananas but even to items bearing the word “banana” or anything evocative of it, including a popular brand of suntan lotion and clothing. Now that’s hard-core.

Ken Morse, the longtime proprietor of Tight Lines Tackle in Sag Harbor, loves to eat bananas, but he too is a believer in the dreaded curse.

“It’s funny, it’s not always at the forefront of my mind when I go fishing,” he said. “But I guess I do observe it now that I think about it, when on the beach or boat.” In late May, Morse recalls that before leaving his house to go to Shinnecock Inlet for some surfcasting, he noticed three bananas on the passenger seat of his pickup truck.

“It was going to be my lunch, but I threw them out of the truck and it turned out the fishing was excellent that day,” he said with a smile. Morse also said that when he goes on another boat and sees someone pull out a banana, he knows the trip is usually doomed. “It’s a crazy superstition, but once it’s in your head, you react to it. So, I guess I subscribe to the bad banana theory.”

“There are only two things I never allow on my boat and that’s bananas and cellphones,” said Capt. Harvey Bennett, the former owner of the Tackle Shop in Amagansett. Bennett, whose family is the 13th generation of his family to fish on the East End, has not hesitated in throwing either item overboard if found.

“It used to be just bananas I had to worry about, but these darn cellphones just drive me crazy too,” he said. “Both are bad luck on a boat. I warn people ahead of time before they come fishing with me.”

For many years, Capt. Rob Aaronson of the charter boat Oh Brother! in Montauk, had a “no bananas” sign nailed to a piling next to his boat. Unfortunately, the sign was recently stolen. If there is some justice, bad luck is likely to happen upon the thief.

Needless to say, my partner and I never caught a fish that day (neither did most on board). I put the blame squarely on him. On the long ride back from Montauk, I lectured him on the curse of the banana. Superstition or not, he now knows never to bring one when we venture out on the water together.

Mashashimuet Park's History and Future
A Conference for Young People to Create Solutions
Get Outside, Get Moving
END_OF_DOCUMENT_TOKEN_TO_BE_REPLACED