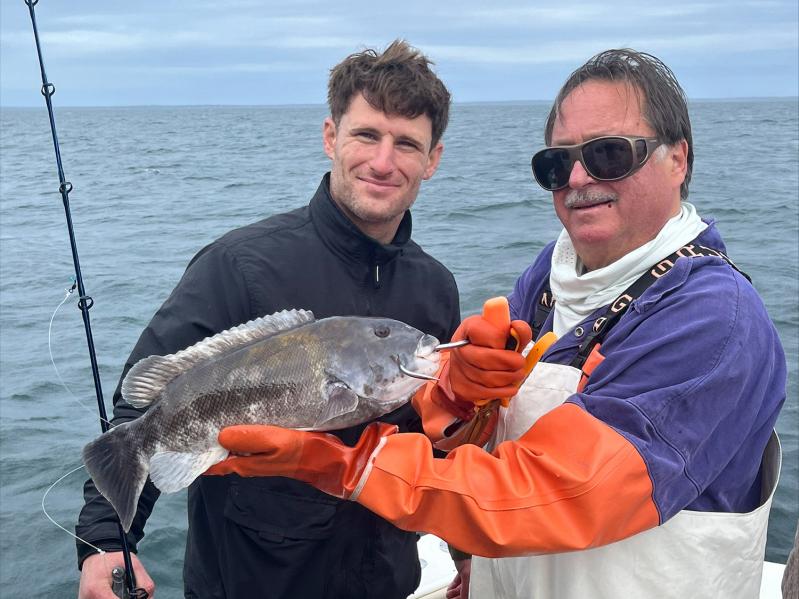 Nomans Land is an isolated and uninhabited 612-acre island just off the southwest corner of Martha’s Vineyard. From 1943 to 1996 the island was used by the Navy as a practice bombing range. Today, Nomans is probably known best for harboring large, husky blackfish.

Yet on Friday morning, Nomans Land was still about 10 miles to the northeast from where we were, in an area that’s still known as Nomans by fishermen out of Montauk. More specifically, we were off the southern tip of Cuttyhunk Island, which guards the entrance to Buzzards Bay, 44 miles east of Montauk Harbor.

About 25 years ago, I can still recall jumping aboard the Viking Starship for the five-hour ride to Nomans (both the island and the area near Cuttyhunk) to target blackfish. Those trips were extremely popular, as full loads of anglers would regularly line the rails. Looking back, I’m reminded that one could retain 10 fish over 14 inches in length. Most of the time, the fishing was off-the-charts good.

Today, the blackfish limits have been significantly lowered, and anglers can now retain only four fish over 16 inches. Few boats now travel that distance for so few fish.

But Friday was a different matter. Arriving at the Viking Dock on the west side of Lake Montauk at 6:30 a.m., I was greeted by Capt. Michael Potts. We were going to Nomans for blackfish. In addition, codfish and sea bass would likely be added to the menu at Cox’s Ledge on our way back home.

A few days earlier, Potts had invited me to join him and Bob DiNuzzo of Westhampton, who would be bringing his new 43-foot Tiara named the Finder’s Fee to Montauk from its home berth near the Shinnecock Canal. They were going to pick us up for our journey eastward.

After loading our gear and tackle aboard, we cruised at a speedy 27 knots. Unlike on the Viking, the ride took only about 90 minutes.

“I’ve known and have fished with Michael for over 40 years,” said DiNuzzo on the ride out from his helm station. “Michael is very passionate about fishing.”

Potts, who sold his charter boat — the Blue Fin IV — last year after many decades in business, has remained busy filling in as a captain on various boats out of Montauk as time allows. For this trip, Potts served as first mate, as well as putting us on some of his favorite pieces of bottom.

Anchored up on our first drop, we were met by a hungry horde of small sea bass that readily inhaled our green-crab baits. The blackfish bite did not materialize. After about 45 minutes, Potts relocated to another spot about a half-mile away in 60 feet of water, under a dense, cloudy sky. No other boats were in sight.

“O.K., drop them in,” said Potts, as the anchor lay tight in the incoming tide. It only took a few minutes for our first keeper-size blackfish to be decked. Shortly thereafter, I landed a succession of three fish between three and six pounds.

The bite was a bit tricky the rest of the morning, but I managed to hook a few more keepers. The rest of the crew also caught their fair share. After nearly reaching our limit at 12:30 p.m., Potts thought it made sense to change plans and search for cod and seabass to the southwest at Cox’s Ledge. There had been rumors of good fishing there of late.

On the ride, DiNuzzo, who I learned is also an accomplished cook, manned the forward galley and served us a hot lunch of sesame-crusted salmon, mixed with rice and assorted fresh vegetables. The ham and cheese sandwich I had prepared before the trip would remain in my cooler. DiNuzzo’s lunch was a most appreciated and unexpected gesture.

About 30 minutes later, we arrived at Cox’s and dropped our clam baits and diamond jigs into 130 feet of water. With barely a turn of the reel handle, all aboard were instantly hooked into large sea bass that ranged up to four pounds. Doubleheaders were the norm, but sadly, the codfish proved elusive. The bass were stacked solidly on the hard bottom and were over-aggressive. The slower-swimming cod had no chance to feed.

We finally called it a day at around 3:30 p.m. There were still about 33 miles to travel back to Montauk and it was getting dark quickly, as the remnants of Hurricane Nicole approached. The seas were also starting to stack up off our beam from the southeast.

Arriving in the dark, DiNuzzo dropped us off back at where we started 12 hours earlier. Unfortunately, his day was still not over, as a two-hour ride back to Shinnecock was in order in the inner waterways of Gardiner’s and Peconic Bays. I felt for him. Thankfully, DiNuzzo safely made his way back to his berth.

As for me, I hope my next trip to Nomans will occur much sooner than 25 years.

On a side note, Capt. Harvey Bennett, the former owner of the Tackle Shop in Amagansett, is on the hunt once again for used baseball equipment, sports shoes, uniforms, and school supplies for underprivileged children in the Dominican Republic and Puerto Rico.

“I’d like to send a few boxes of stuff in time for Christmas to the kids,” said Bennett, who has sent numerous parcels of said goods in the past. For those who would like to donate, Bennett can be reached at 631-324-0777 or at [email protected].