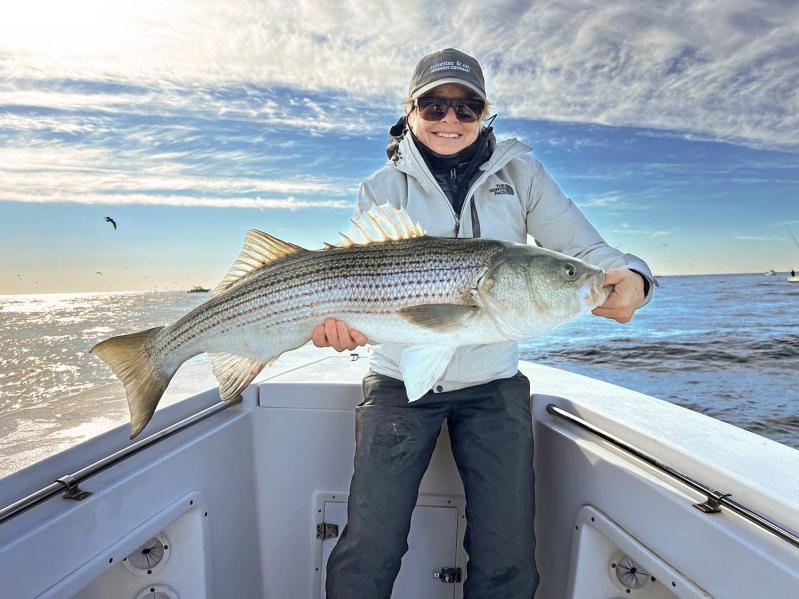 Given that I've fished very little over the past two months, it was great to return to my helm station on board the Rock Water on Saturday morning. A week earlier, I did well on an exploratory trip for blackfish and I was eager to get back out and make up for lost time. Saturday's perfect weather provided just such an opportunity.

My 30-foot boat of nearly 25 years feels like home to me. I know every inch of her from stem to stern. The stout, fiberglass boat was meant to be used and fished hard.

Last year, I tepidly thought of replacing her with a new one from the original builder (Samson Boats) l up in Petit-de-Grat, a bucolic village on Isle Madame, a tiny island off Cape Breton Island in Nova Scotia.

Ultimately, I didn't pull the trigger. It dawned on me that it's probably best to hold onto the one I've always trusted and loved. Some say that true love never dies. That theory can also be applied to boats, I've learned.

Anchoring up Saturday on the same piece of bottom where I'd been seven days earlier, the action was immediate and intense. However, the fish were extremely small, all below the minimum limit of 16 inches. We needed to make a move.

We headed off a few miles east to the Sluiceway, a rather narrow passage of hard-churning current that lies between Plum and Big Gull Islands, and set anchor on a cluster of rocks. My color fish-finder screen showed life on the bottom below. It was a positive sign.

With the anchor set, it was obvious that much heavier sinkers would be required. The outgoing tide of Long Island Sound was exiting hard into Block Island Sound. It took 16 ounces of lead to keep our crab baits close to the bottom.

"I just got a hard bite," said Terie, as she fished on the starboard side of our deck. She reeled in her rig, which was now baitless and re-baited her hook with a green crab for a chance of redemption.

"I've got him," she exclaimed, as she leaned backward, setting the hook on a feisty four-pound fish. A minute later the blackfish was safely landed into the net. The bite was on and the fish were noticeably larger in size.

Terie was hot. In the next 10 minutes, she landed three more keeper-size blackfish and had already reached her legal limit of four fish.

Meanwhile, it was a totally different story for me. Each fish I caught during the fishing frenzy failed to meet the minimum size. Many were close, but luck was not on my side. It was frustrating. I headed back to the interior cabin to take a break and get a bottle of water. The warmth of the late autumn sun also meant it was time to shed a few layers of clothes.

Back on the stern deck after 10 minutes, I baited up my one-hook rig and lowered it into the still strong-running current. Less than a minute later, my fishing rod bent solidly with a nice blackfish.

"Get the net," I said to Terie. "I think it will be a keeper." Sure enough, the fish made the grade when landed and measured. The bigger fish were finally cooperating with me and I quickly reached my limit.

While the bite remained strong, we decided to call it a day by 1 p.m. Our arms were tired, plus we still had an hour's ride back to the dock to the west.

"The blackfish bite has been very solid," confirmed Ken Morse at Tight Lines Tackle in Sag Harbor. "Lots of small fish, but many are still catching their limits." Morse added that striped bass remain strong at Montauk and that surfcasters along the ocean beaches are finding enough action with the linesiders.

Farther offshore, fishing for yellowfin tuna remains on fire. The Viking Star returned to Montauk on Sunday with a full load of the highly-prized fish, along with a few swordfish.

"We had another excellent trip," reported Capt. J.R. Gibson. "We started poking around in the deep and found a few scattered yellowfins. Around sunset, far from the fleet of boats, we found a giant mass of yellowfins."

The skipper noted that those using jigs or bait had rods bent over the rail from bow to stern. "It was pandemonium for hours with tuna of all sizes flying over the rail," he said. "The fast and furious fishing had everyone easily boating their limit."