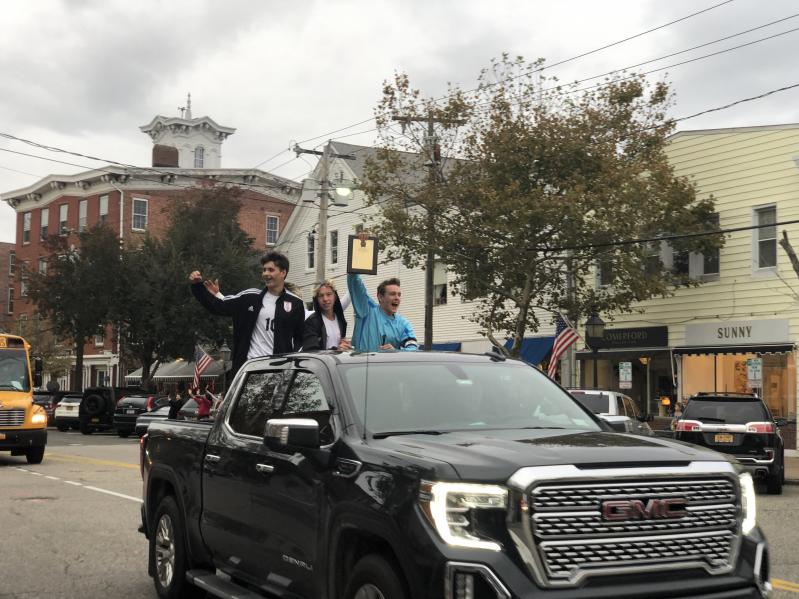 Not only did Pierson (Sag Harbor) High School's field hockey team win a county championship this week, but so too did its boys soccer team.

Moreover, Peter Solow's squad added a Long Island championship to its laurels — the first time that has happened in Solow's 11-year tenure — by defeating Carle Place 1-0 at Mitchel Field in Uniondale Tuesday afternoon, a win that merited a Sag Harbor Fire Department parade later in the day.

"It was a very, very tight game," Solow said afterward. "We scored first, but had they scored first it might have been different. Our whole team played well — it was one of our most complete games."

Solow said Carle Place "had a huge number of corner kicks, free kicks, and throw-ins," putting a lot of pressure on the Whalers' first-year goalie, Gavin Gilbride, but Gilbride was up to it, punching out or corralling numerous attempts.

Interestingly, while Carle Place had the edge in set plays, Pierson cashed in on one of its own, a corner kick coming near the midway point of the first half that Halsey Burton took and which David Moreno, one of three top-notch strikers Solow has -- the others being Jose Ulloa and Brandon Winenga -- buried.

Solow strengthened Pierson's defense after that, and his defenders were up to it, continuing to hold the Nassau County Class C champions scoreless.

"This is the first year in my coaching career that Nassau has had a C team -- usually when we've won the county championship, which has been three or four times since I've been coaching, we've gone straight to the regionals or south regionals."

Southold often has been Pierson's archrival when it comes to Class C play in Suffolk County. The Settlers beat the Whalers 4-0 to win the county title last spring. Pierson beat Southold 4-0 in league play earlier this fall, and about a week and a half before their county title showdown Saturday, which Pierson won 2-0, they tied 1-1.

Solow was to learn Tuesday night where and when and whom Pierson would play next. "The game will either be in Westchester or farther up, on the other side of the Hudson, on Saturday, I think."

The last time the Whalers played upstate, in 2017, they lost 2-0 to Lansing, the eventual champion, in a semifinal matchup.