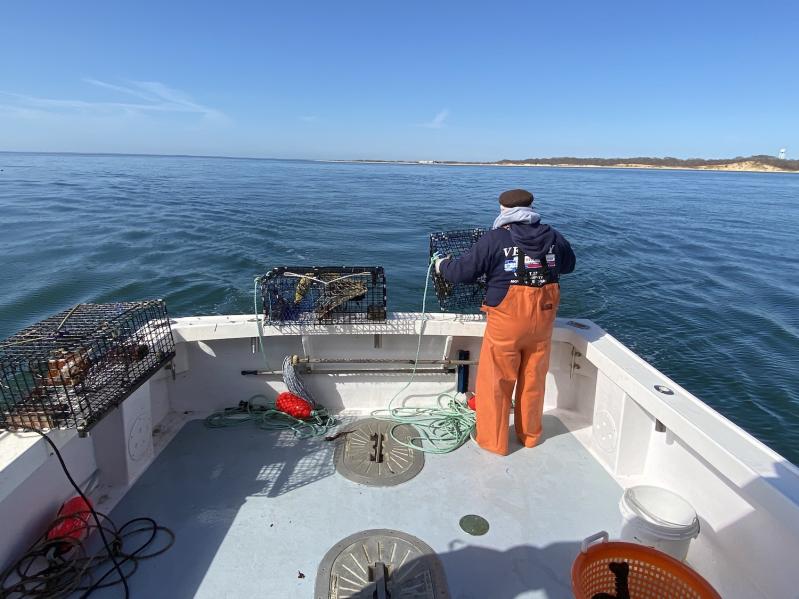 Last week, I was mugged. No, the unfortunate incident did not happen on Main Street, a dark back alley, or even on dry land, for that matter. It occurred on the water, where I set my lobster traps.

On the first trap I hauled up last Thursday morning, the rope tangled in several knots, something that does not happen naturally. Once I secured the trap on my stern deck, I noticed that whoever previously pulled it up did not even bother to retie the bungee cord clip that secures the top of the cage. I was robbed. It was a brazen, selfish act.

The bungee cord was not secured on the next trap I retrieved either. Also missing (along with any lobster) were the three dozen oysters I had placed in the trap the previous week, as I wanted to keep them in the cooler waters for eventual consumption.

"Some people really suck," said my companion, who helps me on deck. "What a lousy thing to do." Whoever mugged me certainly enjoyed a nice dinner that night.

While out there, an officer on a Suffolk County Sheriff's Department boat on routine patrol came over for a chat. He asked how I was doing in my catch and I briefed him on what happened. He shook his head in dismay and advised me that I should inform the State Department of Environmental Conservation, then sped off to help a boat that had broken down nearby.

Unless you catch someone in the act, there isn't much you can do to dissuade poaching. I will now secure the lids of my traps with plastic zip ties, but a sharp knife is all it will take to open them.

My logbook also shows that my lobster catch is down this year. How much of that can be chalked up to poachers is uncertain. Surveillance cameras are a fixture just about anywhere these days on land. But on the water, it's a different story.

This isn't the first time I've been poached and it probably won't be the last.

I pursue lobster solely on a recreational basis, but I can only imagine the anger a hard-working commercial fisherman must feel when such theft occurs. These are people who make their living with their traps and nets.

On a lighter note, Ken Morse at Tight Lines Tackle in Sag Harbor reports that "the bass fishing out at Montauk has been exceptional. . . . Light-tackle anglers are really having a blast with fish up to 50 pounds being caught and released."

Morse added that weakfish remain thick near buoy 16 in Noyac Bay, while porgies and blowfish are plentiful from Peconic Bay to Gardiner's Bay. "Crabbing is also good in all of the local creeks and coves, and there are small blues being caught at Jessup's Neck on diamond jigs."

Over at Mrs. Sam's Bait and Tackle in East Hampton, the owner, Sebastian Gorgone, said that porgy rigs and sandworms have been flying out of his store. "The porgy fishing has been outstanding in many places, including right in Three Mile Harbor. Mixed in are some very nice blowfish, too."

Gorgone added that small bass are also roaming along the bay beaches, and that blue-claw crabs are pleasing many folks who enjoy a nice crab dinner.

"Bass fishing is good in the bays and out at Montauk," confirmed Harvey Bennett at the Tackle Shop in Amagansett. Bennett himself has taken advantage of the action after leaving his establishment at the end day. "I've really enjoyed it, and the fishing has been great from the beach." The veteran tackle shop owner also said that porgies and sea bass can be had on the east side of Gardiner's Island. "And there are also blowfish, porgies, and crabs in Three Mile Harbor."

While the quantity of fluke may not be great this season, the size of the fish landed in recent days has been impressive out at Montauk. On Saturday, the Miss Montauk II decked two fish over 10 pounds, while the charter boat Simple Life, under Capt. Tyler Quaresimo's direction, landed two double-digit fluke up to 14.3 pounds. Now that's a doormat!

"The fluke fishing has actually picked up the past few days," said Paul Apostolides of Paulie's Tackle Shop in downtown Montauk. "There's a big body of sand eels around and some more keepers are in the mix." Apostolides also confirmed the excellent bass bite in the rips for boaters, and said that plenty of bluefish, mixed with smaller bass, are being taken on the north side by surfcasters.

Speaking of surfcasters, the Montauk Surfmasters Spring Striped Bass Tournament came to a close over the weekend, with Brandon Sausele coming out on top once again with a 31-pound bass that he caught and released back in May. Sausele, who probably spends more hours than anyone fishing from the salty suds (especially when most of us are fast asleep), is as devoted to honing his craft anyone.