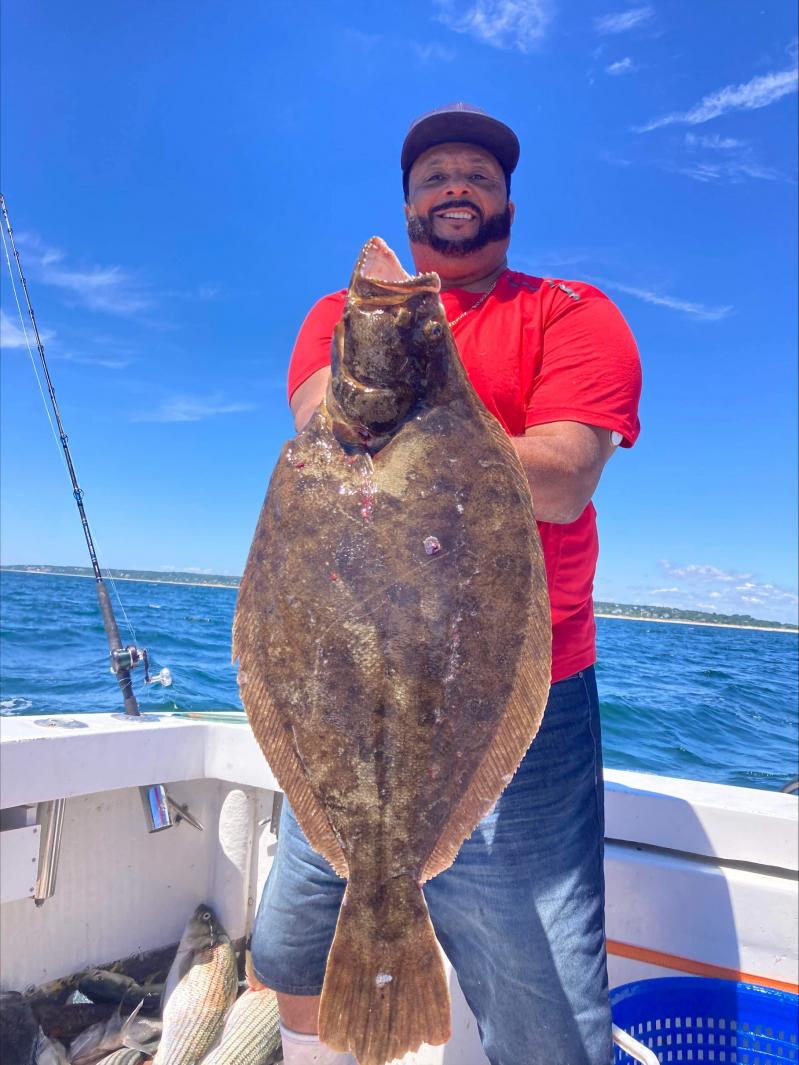 Harrison Hale caught this 10.2-pound fluke on Saturday aboard a Chancey Charters boat out of Montauk.
Capt. Hugh Chancey
By Jon M. Diat

“I can’t believe it’s already August,” a boater at my dock in Sag Harbor said early Monday morning, while he readied his craft. “I mean, it’s only four more weeks until Labor Day. The summer has gone all too quickly,” he smiled.

As a reflex I nodded in agreement, but it wasn’t until I untied the dock lines to my boat for a check on my lobster traps that his words suddenly struck a chord with me. At my age, time certainly does indeed fly by.

While the days are getting shorter, we still have a lot of summer yet to enjoy, buts it’s hard not to wish that summer could last a little bit longer.

“Oh man, I love summer,” Paul Apostolides, the longtime owner of Paulie’s Tackle Shop in downtown Montauk, remarked on a bright and sunny Sunday afternoon. “I wish summer could last all year out here.”

As for the fishing scene, “the fluke bite has really picked up over the past week or so,” Apostolides said. “Nice fish up to 10 pounds have been taken.” The striped bass bite that has held strong off Montauk for the past two months has slowed down, with the best fishing now off to the east near Block Island, he added. “But the surfcasters at night still are having some good fishing on the south side beaches, while some bluefish are roaming around on the north side.”

Ken Morse, the proprietor of Tight Lines Tackle in Sag Harbor, echoed Apostolides’s appreciation of the sun and fun of the current season. “Summer is my favorite time of the year. It’s obviously also the busiest time for my business as well. It’s kind of hard to fathom that September is just four weeks away. Still, fishing is pretty good, but it’s better the farther east you go as the waters are much cooler than in the western bays.”

Sebastian Gorgone, owner of Mrs. Sam’s Bait and Tackle, concurred, saying that the fishing has been especially good for fluke. “Someone came in late on Sunday and said they caught some Spanish mackerel just outside Three Mile Harbor. There is still plenty of great fishing ahead for sure on many species. But sadly, Labor Day is not far behind.”

Behind the counter on Saturday afternoon at Westlake Marina in Montauk Harbor, David Reutershan was also caught off guard by the changing of the calendar. Summer has gone quickly, but this one has been different, he said. “There are less people going on their boats.”

Reutershan, who has manned the front desk of the tackle shop on West Lake Drive for many years, pointed to the many docks and slips at the popular marina. He wanted to illustrate the point that many boats were tied up, despite the pristine conditions.

“It’s a picture-perfect Saturday, but very few boats went out today to fish,” he told me, theorizing that “the current economy has seemingly played a part in less people using their boats this year. It’s pretty clear that inflation has played a part in what people are doing or not doing.”

While the price of gasoline and diesel has come down in recent weeks, it still hovers around $6 per gallon at many fueling stations on the water. With consumers cutting down on discretionary purchases, it appears that time on the boat is one of these.

“The fishing has been good too,” Reutershan said. “While the striped bass fishing has slowed down a bit and has pushed off toward Block Island, the fluke fishing has improved and there are plenty of sea bass and porgies around.”

Reutershan also noted that yellowfin tuna are close by, and some boats have taken advantage of the good bite. “I had a boat that went out on Saturday morning and they came back by lunchtime with a nice catch.” He urged people to “stop watching television and go fishing.”

Capt. Michael Vegessi of the Lazybones, a half-day party boat that focuses on fluke out of Montauk, has witnessed an increase in his daily catch. The Bones had about 35 keeper-size fluke on its Saturday morning trip, with several fish approaching the seven-pound mark. The remainder of the weekend was equally successful.

“The fishing was on fire this weekend,” he said. “The fish are now spread out too; it’s not just one or two spots that are holding the fish either.” Vegessi said that the tasty flatfish are being taken north of Montauk inlet at the Pocketbook grounds, all the way to the south side of the Montauk Lighthouse.

“No matter the conditions and tide, we are able to fish in all areas and the fluke are there,” he said. “August is now here, but we plan to fish for fluke through most of September. Summer is not over by any means.”

Mashashimuet Park's History and Future
A Conference for Young People to Create Solutions
Get Outside, Get Moving
END_OF_DOCUMENT_TOKEN_TO_BE_REPLACED