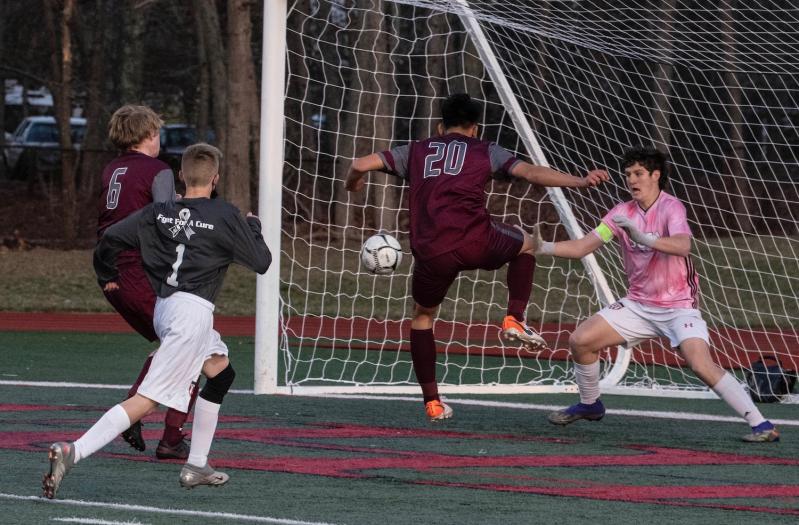 Going into this, the final week of boys soccer play in League IV, East Hampton High School's well-balanced team, which finished at 8-1-1 as the result of a 3-0 win at Miller Place Monday night, had a good chance of winning the league title outright or sharing it.

Don McGovern, East Hampton's coach, said in an email that "now we need to see how things play out with the other teams this week," meaning Amityville and Sayville, both of which won their Monday games, Amityville by 3-1 over Islip and Sayville by 2-0 over Mount Sinai.

McGovern agreed that should Amityville finish the league season at 9-1-0, the Warriors would win out. Amityville is to play at Sayville on Wednesday.

At any rate, suffice to say that McGovern's players, many of whom he's coached since they were fifth graders, have done remarkably well this spring, showing themselves to be at least equal to East Hampton's best teams of the recent past, if not a bit better.

What strikes one is the team's uniform skill across the board -- the players, all of them excellent ball-handlers, attack well, defend well, and never let up. And Matthew McGovern is the best passer one could imagine, repeatedly setting up teammates to his left and right.

Monday's win at Miller Place was the ninth shutout, or "clean sheet," for East Hampton and Christopher Barahona, the goalie.

Eric Armijos, Robert Rea, and Christopher Pintado scored Monday's goals. The Bonackers led 2-0 at halftime, and the margin of victory easily could have been greater. This writer, who live-streamed the game, counted five near misses in the early minutes of the second half before Pintado, from about 20 yards out, netted a low, hard shot that bounced in off the inside of the left post.

The semifinals are to be contested at the higher seeds on Wednesday, April 21, also at 4, and the final is to be played at Diamond in the Pines in Coram on Saturday, April 24, at 5.