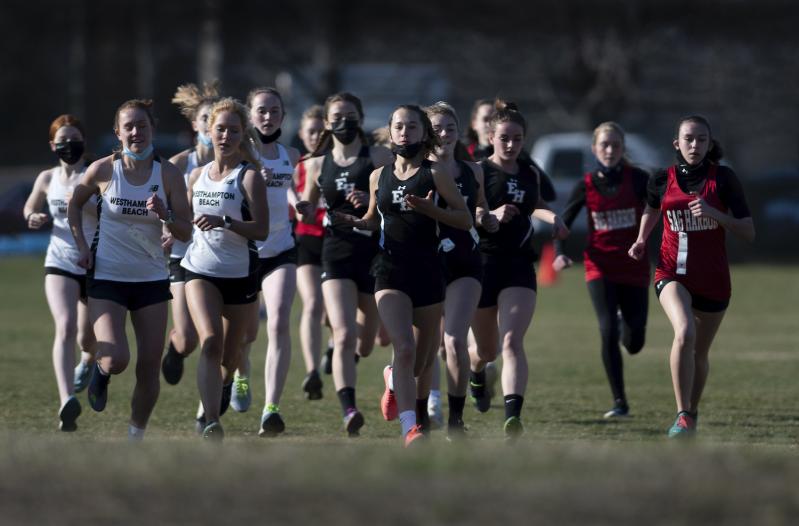 East Hampton High's girls and boys cross-country teams -- the girls being the better of the two vis-a-vis their peers -- ran in an invitational quad meet Friday at Sag Harbor's Mashashimuet Park, though both teams were short-handed.

Ava Engstrom, quarantined owing to a Covid case in her family, was missing from the girls' roster, which won a county championship in 2019 with the same five as this year -- Engstrom, Bella Tarbet, Emma Hren, Ryleigh O'Donnell, and Dylan Cashin.

As of Monday, the girls and boys had only to win one of their last two meets to qualify for the division championships that are to be held at Sunken Meadow State Park on April 13.

Kevin Barry, the boys coach -- and Dylan Cashin's uncle -- said the girls could well win another county title the week following the division meet, though Westhampton Beach's boys -- "one of the best teams in the state" -- who won Friday's invitational easily, had to be favored when it comes to the county Class B race, he said.

Barry was missing four of his top eight Friday for various reasons -- none of which involved Covid -- and Diane O'Donnell, who coaches the girls, was missing Engstrom.

Cashin, a ninth grader who has come on strong this season, led the 2.58-mile girls race for the first mile, before being passed by Pierson's Penelope Greene, the eventual winner, and Westhampton Beach's Jackie Amato, the eventual runner-up. Amato's father, Joe, coaches Pierson's boys, "the best team Pierson's had in years," according to Barry.

"Though she was passed she didn't fade -- she stayed," O'Donnell said of Cashin. William Floyd's team won the girls race. Ben McErlean was Pierson's top runner in the boys race, finishing sixth.

East Hampton's boys and girls were to have run against their Mount Sinai peers behind East Hampton High School Tuesday morning, though Engstrom, because of quarantining, was to have missed it, and perhaps Evan Masi, as well, who as of Monday was awaiting the results of an ankle M.R.I. He was one of those missing from Barry's lineup Friday.

The sole bright spot in the onslaught was the fact that Lilia Schaefer, East Hampton's goalie, made 16 saves.

Ficeto, in an email, said Harborfields, which was 6-0 as of Monday, had 20 offensive corner plays to East Hampton's three.

The Bonackers bounced back, however, shutting out Shoreham-Wading River 2-0 here on Saturday behind goals by Emma McGrory, assisted by Anna Hugo in the first quarter and by Chloe Coleman in the second. Ficeto's charges were awarded nine offensive corners that day, Shoreham, four. The win improved the team's record to 4-3.

Girls volleyball lost in three to Elwood-John Glenn here on Saturday, but, aside from the second set, played the undefeated league-leader toe to toe. The scores were 25-20, 25-7, and 25-22.

With Glenn up 18-4 in the second set, Faith Fenelon, the starting setter, had to come out after hitting the floor in diving for a dig close to the net. On Sunday, Alex Choi, East Hampton's coach, said in an email that Fenelon was "being monitored for a concussion," but had "sounded all right and wasn't dizzy, so that is promising." She was to be re-evaluated Monday morning by the trainer.

Scout Lynch, a sophomore, replaced Fenelon as the setter, "and she did a great job filling in for the rest of the match," Choi said.

On the upside, East Hampton defeated Amityville in three on March 24. The team's record was 4-5 as of Monday.

Girls tennis, which got its top player, Juliana Barahona, back this past week, was 2-3 as of Monday.

Kevin McConville, the girls' coach -- and the head pro at Hampton Racquet -- said Sunday that his team lost to William Floyd and Westhampton Beach last week, by 5-2 and 7-0 scores, but, "with a totally changed lineup," defeated Eastport-South Manor 5-2 here Friday.

He had played his top two singles players, Barahona and Sandrine Becht, a transfer from Vero Beach, Fla., at first doubles in the Eastport-South Manor match. "It's been our plan all along to pair Juliana with Sandrine in doubles," he said. "They ought to do well in the county individual tournament. I'm going to play them at first doubles from now on."

Eva Wojtusiak, who has been playing first doubles with Chiara Bedini, played at first singles against E.S.M. and Katherine Lefevre, who had been playing at second doubles, played two. "Both of them lost, but Eastport's top two are pretty good," said McConville.

East Hampton, he added, won at third singles (Riley Roesel, who had returned from quarantine), at fourth singles (Lily Somers, who had formerly been paired with Roesel at third doubles), and swept the doubles.

Barahona, who recently returned to the courts after a bout of Covid-19 and a subsequent quarantining period, drew the defending county champion, Rose Hayes, as her opponent at first singles in the Westhampton match here on March 24.

At first view, there didn't seem to be all that much difference between them. Each hit good topspin serves with their arms fully extended, and both hit groundstrokes with pace, but Hayes, who won 6-0, 6-0, "was more consistent," said McConville, who coaches Barahona year round. "The next day in practice, Juliana was playing much better, because of having played Rose the day before."

As for his doubles teams, the coach said he agreed they should play more aggressively, that both players should attack at the net rather than play one-up, one-back. As for patty-cake second serves, "frankly, a good second serve is a rare commodity at this level. We're working on it. I tell them that when it comes to second serves, 'Use spin, not fear.' "