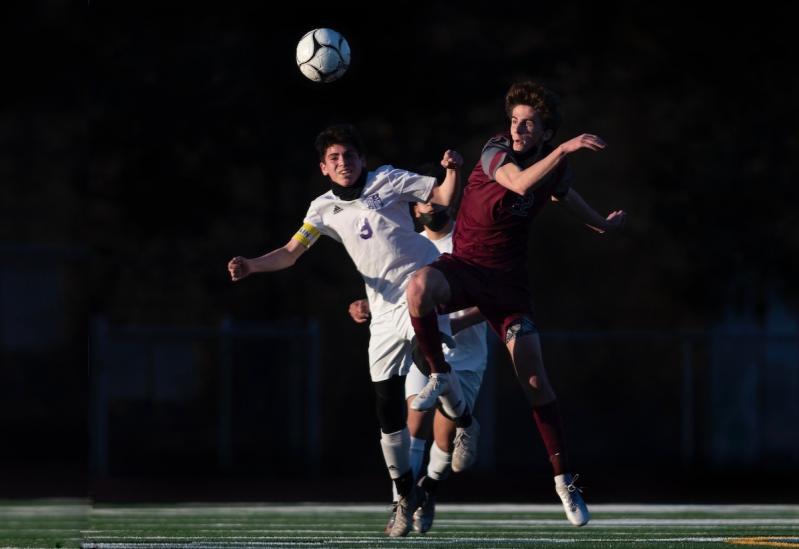 Hudson Musnicki (22), one of East Hampton's staunch defenders, vied with a Hampton Bays player for a head ball during Friday's boys soccer game here, which ended in a 1-1 tie.
Craig Macnaughton
By Jack Graves

East Hampton High's boys soccer team, which was to have played at Wyandanch Monday, at Shoreham-Wading River Wednesday, and is to play here on Friday with Bayport-Blue Point, has shown itself to be a good one.

Though there appears to be no go-to scorer the likes of Nick West, Mario Olaya, or Ernesto Valverde of years past, there are about four or five players other than Eric Armijos, a sophomore who's been averaging about one goal per game, capable of finding the nets at any time when the Bonackers are attacking -- which is even better.

Though in the first half of Friday's league-opener here, it was Hampton Bays, keyed by its center midfielder, Justin Jimenez, and by a tall forward, Francisco Funez, that did most of the attacking.

In the second half, however, Don McGovern's charges were to play far more aggressively. About six minutes into the second half, Armijos won a 50-50 ball, and, from about 18 yards out, fired a shot high into the left corner of the Baymen's nets, an electrifying goal that had his teammates on the sidelines shouting and leaping from the bench.

Armijos's goal tied the score at 1-1 -- Funez had in similar fashion finished off a quick counterattack with about eight minutes left until the halftime break. But from Armijos's goal on, it was all East Hampton as Jimenez, Funez, and their teammates faded.

"That was a beautiful goal," McGovern was to say later of Armijos's score, and he agreed that East Hampton had played much better in the second half. Though it remained a tie, "there were at least two terrific chances," McGovern said, referring in particular to Christopher Pintado's bid from the right side that zipped just over the crossbar in the 62nd minute, and to Kevin Ruiz's failure to get all of the ball that crossed the crease in the 71st.

"He's got a motor," McGovern said of Ruiz, who recently recovered from a nagging injury, "tremendous energy." He added, "In the great scheme of things, it was a great game -- both teams played very well."

Because the contest had begun about eight minutes late, and because it was not yet daylight saving time, and despite the fact that the halftime break had been shortened, no overtime periods were played. By the end of regulation, it was pretty much dark.

The second half, McGovern said, reminded him of "how relentless we used to be," and gave him good reason to think that this edition can play that way too, for the entire 80 minutes.

"We have players we know can finish," he said after Sunday afternoon's practice. When asked if the team practiced every Sunday, McGovern replied in the affirmative. "It's been great," he said. "They don't want a day off."