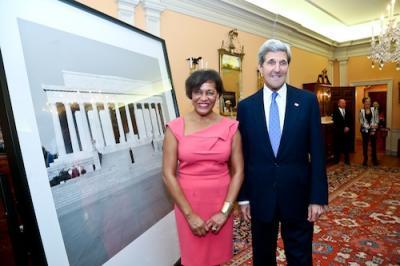 Carrie Mae Weems and John Kerry stood by "Echoes for Marian" a digital photograph of the artist outside the Lincoln Memorial that she donated to FAPE.
By Jennifer Landes

Chances are you will hear a lot about FAPE in the five weeks that it is the focus of a show at Guild Hall, organized by Robert Storr, but at this point most people here probably don’t know much  about the Foundation for Art and Preservation in Embassies program.The name is helpful. It is an independent foundation that provides American art to the nearest and most far flung United States embassies worldwide. Leonore Annenberg, Wendy Luers, Lee Kimche McGrath, and Carol Price founded the organization in 1986 and it has since involved some of the most dedicated and high-profile arts patrons as well as former ambassadors and spouses. Mr. Storr, who is the dean of the Yale School of Art and a former curator at the Museum of Modern Art, is the chairman of FAPE's Professional Fine Arts Committee.On May 7, as part of the foundation’s annual meeting, the group assembled at the United States Department of State for a dinner hosted by Secretary of State John Kerry and Jo Carole Lauder, the current chairman of FAPE. The dinner honored Alice Walton, for her philanthropic efforts and the Crystal Bridges Museum of Art she founded in Arkansas, which is the first new museum in 50 years dedicated to American Art.Since its founding, FAPE has commissioned and received numerous works of art, from artists such as Chuck Close, Jasper Johns, Carrie Mae Weems, and Ellsworth Kelley. Some are site specific and most others are photographs and prints. The exhibition that will come to Guild Hall will be a mixture of these artworks and will open June 21. The show, which will travel to other institutions, will allow viewers to learn more about the program and why it is important. The foundation provides, as Mr. Kerry noted at the dinner, a way to celebrate the universal language of art and expand the American diplomatic mission through the exhibition of 200 American artists to the world through 140 embassies.