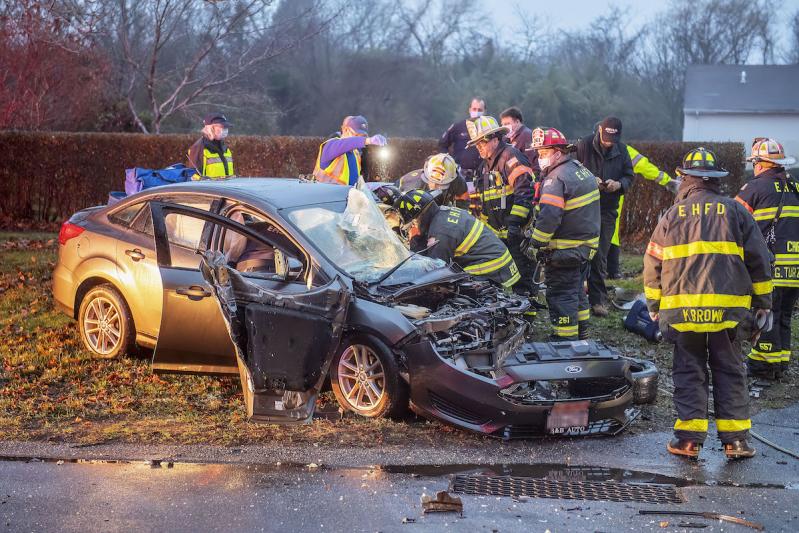 A man was charged with D.W.I. following a crash on Sunday morning.
Michael Heller
By Christine Sampson

An East Hampton Town man was charged with driving while intoxicated following a crash Sunday morning in which the Fire Department had to bring in heavy-rescue equipment to pull an injured woman from her car.

According to an East Hampton Village police report, Jorge Mejialopez, 19, driving a 2007 Hyundai, swerved into oncoming traffic and struck a 2016 Ford with Myrsini Fatsis of Montauk, 57, behind the wheel. The nearly head-on collision occurred on Pantigo Road near Fredericka Lane around 6:30 a.m. Multiple passers-by called 911 to report the accident.

East Hampton Fire Department Chief Gerard Turza Jr. said Monday that around 50 first responders answered the call for help. After being extricated from her car Ms. Fatsis was taken by ambulance to Stony Brook Southampton Hospital, injured but in stable condition. Chief Turza said the rescue was pretty straightforward as a paramedic attended to Ms. Fatsis while the firefighters handled the wreckage.

Mr. Mejialopez complained of leg pain but refused medical attention. His D.W.I. charge is a misdemeanor, levied when a person is under the legal drinking age of 21 and when that person has a blood-alcohol level between .02 and .07. He was arraigned after the accident by Justice Lisa R. Rana in East Hampton Town Justice Court and will next appear in court on Feb. 3.