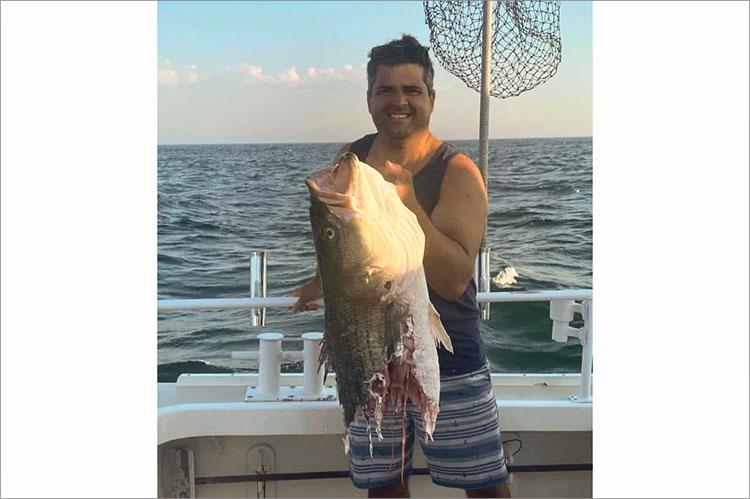 Adam Berladino’s 40-pound stripedbass was reduced by half, courtesy of a shark, on a recent trip aboard the November Rain off Montauk.
Capt. Steve Ruiz
By Jon M. Diat

It still goes down as one of the most famous lines in Hollywood movie history. In the 1975 summer blockbuster "Jaws," the character of Martin Brody, the nervous, landlubber police chief of fictitious Amity Island, captured the tense scene perfectly on the Orca, Capt. Sam Quint's rickety old boat.

While haphazardly feeding the chum slick off the stern on a hot and still summer afternoon, he was startled by the emergence of the giant head of a 25-foot great white shark lunging suddenly out of the water, narrowly missing his hand. Stepping backward in shock from the aft deck into the main cabin with the stub of a cigarette dangling from his trembling lips, eyes bulging, Brody mutters to an unsuspecting Quint, "You're gonna need a bigger boat." Quite the understatement.

Brody was played by the late Roy Scheider, who also happened to reside for years in Sagaponack, and later said that the line was not in the original script. However, his brilliant ad-libbed words captured the moment perfectly and live on as some of the most famous lines from the movie.

While the supersize shark was vanquished in the final scene of the movie, some of its distant cousins have once again made their presence felt in our local waters. Shark sightings along the ocean shores of Long Island have been on the rise — and in the media — in the past week or so.

In today's social media-charged environment where news, fake or not, makes instantaneous headlines, the word that various species of sharks have been seen offshore here should hardly come as a surprise. The copious amount of bait currently in our warm waters, including mackerel, sand eels, bunker, and shad, is bound to bring other fish, as well as larger creatures like sharks, porpoises, and whales, to feed. Even very close to shore. It's nature happening in its most natural setting.

I don't advocate jumping in the water when a shark fin is sighted, but attacks on humans are incredibly rare. Still, sharks can bring up our deepest fears. And that's why Nat Geo's Sharkfest and Discovery Channel's upcoming Shark Week (starting Sunday) bring some of the channels' highest viewership numbers of the year.

However, for those fishing last week on the November Rain, a Montauk charter boat, the group did not need to turn on the TV to catch Shark Week, as they had their own close encounter with a shark.

"We were trolling a few miles off the point, when we hooked into a large striped bass or several at the same time," recalled Capt. Steve Ruiz of the 43-foot boat based at Westlake Marina. Ruiz's lure of choice that morning was an umbrella rig, a widely used, multi-lure rig adorned with five hooked tubes designed to imitate a school of sand eels.

"It took a good amount of line at first and then it just went dead," he said. Adam Belardino was the angler on the rod, and when he reeled in the rest of the line, what came next was a sight foreign to the captain. "The striper was completely bitten in half," said the veteran skipper. "The fish was probably about 40 pounds whole. I've never seen anything like that happen to a bass that close to shore."

Ruiz believes the striped bass fell victim to either a mako or great white. "Whatever it was had to be pretty big given how clean the bite was."

"I've sold a few shark rigs, so I guess a few folks are trying from the beach," said Sebastian Gorgone at Mrs. Sam's Bait and Tackle in East Hampton. "I heard one guy had one on the other day, but the line parted. Otherwise, crabs have been good in the creeks and harbors, and the snappers are in too, which is keeping the kids happy."

Harvey Bennett at the Tackle Shop in Amagansett agreed that there seem to be a decent number of sharks around this summer. "Seems like most are sandbar sharks, which are harmless. There's a lot of bait in the water, so the fish know where to go when they are hungry."

Bennett said that fluke fishing remains decent near Napeague, and that porgy action remains good at the dock in Fort Pond Bay and other local areas. Blowfish, too, can be had in Three Mile Harbor, he said, and schools of bluefish are roaming around Gardiner's Bay.

He was also enthused that snappers have arrived on time. "They will get bigger every week," he said. "Snappers are a great way to introduce kids to fishing as they are always around to be caught. I still love to fish for them too."

"It's pretty typical action for the weather and time of year," observed the light tackle guide Capt. Merritt White of Gunkholin Charters. "There's been a great sea bass and porgy bite on small jigs, and we're catching blues consistently on casting plugs and deceiver and popper flies. We are also starting to see various species of mackerel in our local waters too. Hopefully we'll get a respectable run of bonito again like we had last year."

As for the fishing out at Montauk, Ruiz said that bass fishing remains good, and that the action on fluke has finally picked up in the past two weeks. "It was a tough start for fluke, but they are finally coming on," he said.