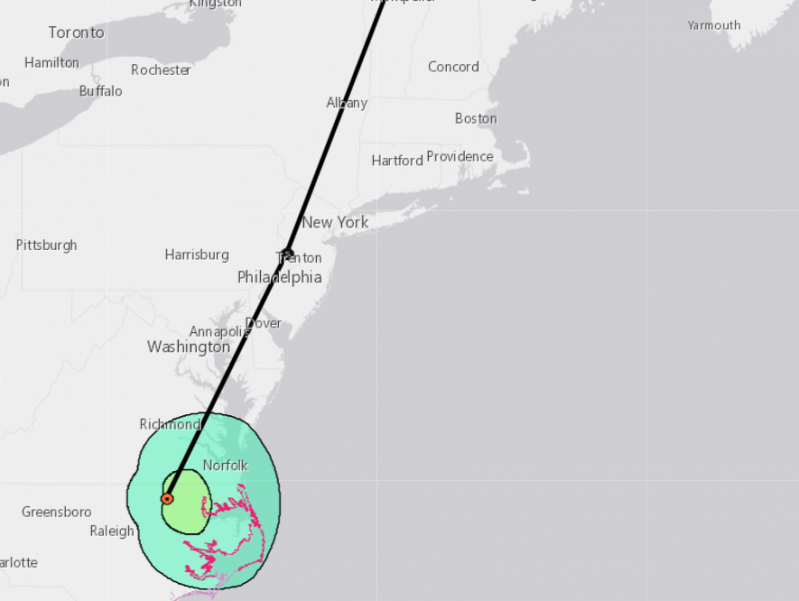 Update, Aug. 4, 6:35 a.m.: The East End of Long Island will be spared the worst of Tropical Storm Isaias. According to the National Hurricane Center, its path is expected to remain well to the west of New York City on Tuesday, passing over Philadelphia and Trenton, N.J.

Tuesday's forecast was for showers and thunderstorms beginning around 8 a.m. on the East End. Winds from the southeast and south were forecast by the National Weather Service to increase during the day, peaking around 5 p.m. around 34 miles per hour with gusts to 50 miles per hour. Conditions were expected to improve rapidly after nightfall.

A tropical storm warning was in effect on the East Coast from Surf City, N.C., to the Candaian border in Maine, including Long Island Sound, Peconic Bay, and Gardiner's Bay. Storm surge along most of the Atlantic Coast was not anticipated.

Wednesday's Weather Service forecast was for a hot and humid day, with partly cloudy skies and a high of 82 degrees.

Monday, Aug. 3, 7:40 a.m.: A tropical storm warning was posted overnight for much of the Northeast coast, including Long Island and the Long Island Sound. The National Hurricane Center in Miami expected Isaias to strengthen into a hurricane during the day on Monday.

As of 5 a.m. on Monday, Isaias was about 115 miles east-southeast of Jacksonville, Fla., with maximum sustained winds of 70 miles per hour. It was moving north at 9 miles per hour. A hurricane warning was in effect for portions of South Carolina and North Carolina. The tropical storm warning extended northward to Watch Hill, R.I.

Isaias's center will pass east of Georgia on Monday then move inland Monday night over the North Carolina Outer Banks, then shift northeast and moving along the Mid-Atlantic states. Tropical storm-force winds extended about 125 miles from its center in the early Monday report from the National Hurricane Center.

Rainfall totals are forecast at three to six inches in the Carolinas and two to four inches in the New York Metropolitan Area, Long Island, and much of New England. A Navy forecast estimated that waves of up to 18 feet were likely south of Long Island late Tuesday and on Wednesday. Significant erosion and occasional overwashes can be expected until Isaias moves inland.