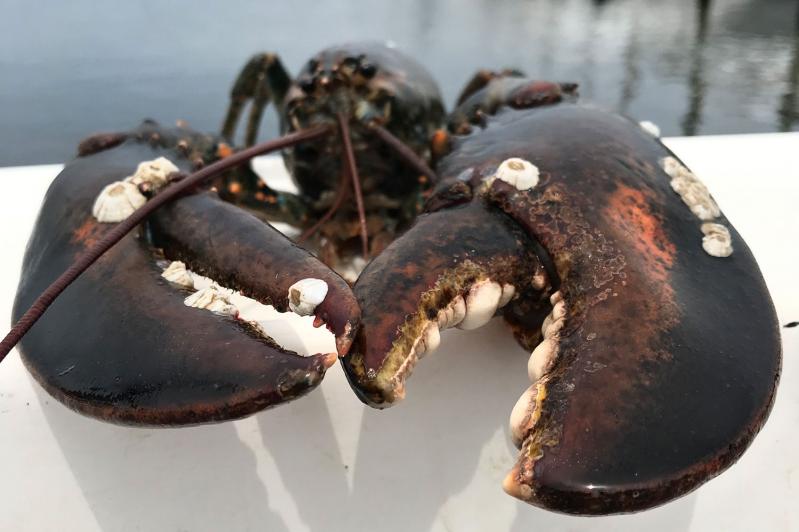 While many lobsters are shedding their exoskeleton at this time of year, a few hard-shelled lobsters, like this barnacle-encrusted one, remain in the catch in local waters.
Jon M. Diat
By Jon M. Diat

Last week, Tropical Storm Isaias delivered a quick, glancing blow to our area, before it raced northward to eastern Quebec and beyond. It was not the most powerful of storms, but for a few brief hours, some pretty serious winds out of the south created enough damage to topple some trees and leave some homes deep in darkness. It was far worse in other parts of Long Island. If the storm had lasted a while longer, clearly there would have been more devastation to those on land or sea.

But in that brief time period it was doing its thing, the waters of Shelter Island Sound in my backyard were whipped into a frenzy with intense gusts to 60 miles per hour coming in frequent bursts. Sizable wind-swept swells in the rather enclosed waters are not an everyday occurrence.

The winds also brought about some anxiety as to how my lobster traps were surviving. Being that they were positioned on open bottomland, they were also not protected by any lee of the land.

A number of years ago, after a lengthy northeast gale, I lost a few that were never recovered. The remainder I found were tossed about far from their original location. Churned by the turbulent wave action, rocks and other debris filled the traps. They were a mess.

Many people I don't know very well give me a quizzical look when I tell them that I set out my own traps for lobster: "We have lobster here? Really?" Most people believe that lobsters are foreign to our local waters and that they only come from Maine or Canada.

And for the most part, that's true. Maine produces 80 percent of the domestic catch. But before a massive die-off of lobsters in the summer of 1999, there were 1,200 licensed lobstermen plying their trade in Lobster Management Area 4, which includes all of Long Island Sound eastward to Montauk.

This area produced catches worth about $36 million annually. In 2002, the number of licensed lobstermen fell to about 900, and by 2004, commercial lobster landings were worth less than $7 million. Ten years later, landings represented only 1 percent of the peak values of the pre-1999 mortality event. In Montauk, there are now only two boats that regularly set out traps. The industry has not recovered and it probably never will. Sad indeed.

On Sunday morning, it was time to check on my own set of gear to see what remained of it. The long ride to the northeast was pleasant, with little wind on the first of the incoming tide. Eagerly scanning the horizon as I neared my destination, I didn't see my red buoys. Not a good sign.

However, five minutes later, a few could be seen as I idled down on my diesel engine. Doing a quick count, I could make out all 15 of them. Surprisingly, they were all in their original position from 10 days before, albeit loaded with seaweed, and only a few keeper-size lobsters.

The catch has been a bit down over the past few weeks, but that's normal. During this time of the year, many lobsters are in hiding working to shed their exoskeleton. As such, they do not feed and remain in seclusion until their new shells harden up. Still, a few crusty hard-shelled specimens were taken that morning. I had no reason to complain.

The season for lobster in my zone concludes on Sept. 8. It will reopen at the end of November, but by that time, my boat will be ready to be pulled from the water for its deep winter sleep.

I still have a few more weeks to enjoy the fruits of my labor with my traps, so long as no major storms or hurricanes ride up the coast.

As for the local fishing scene, the action remains in summertime-mode, with a wide assortment of fish to be had, especially when fishing in cooler waters.

"Still not much action locally," admitted Ken Morse of Tight Lines Tackle in Sag Harbor. "The best fishing is still all to the east at Gardiner's Island and beyond." Fish on the menu include fluke, sea bass, striped bass, and bluefish. "It's typical midsummer stuff," he said. "The inner bays are very warm and it has slowed down the fishing."

"Snappers are everywhere," exclaimed Harvey Bennett at the Tackle Shop in Amagansett, speaking about the baby-size bluefish that have invaded local bays, coves, and harbors. "Fluke are hanging in, and porgies and sea bass fishing has been good as well at Montauk and other local spots." Bennett also added that small striped bass, including a few keepers, continue to be had from the ocean surf when conditions allow.

Ever the humanitarian, the veteran tackle dealer is still on the lookout for donations of baseball equipment, as well as clothes, shoes, and school supplies for underprivileged children in the Dominican Republic, an effort he has supported for several years. In particular, Tropical Storm Isaias wreaked havoc on the impoverished country and Bennett has put out the urgent call for women's clothes and money to help two baseball families he has helped support in the past who saw their houses wiped out by flooding rain.

"If anyone has anything to donate and I'm not here, just leave it in the big cooler behind the shop," he advised. "These two families had it hard before the storm, but now they literally have nothing on their backs."

On a side note, the Montauk Surfcasters Association will hold a dedication of a bench in the memory of Willy Young, at the Montauk Lighthouse pathwayÊon Saturday at 10:30 a.m. Young, a giant in the Long Island surfcasting community, was involved in several surfcasting clubs, including as the founder of the M.S.A., and several advocacy organizations. He was always ready to lend a helping hand. Young's passing two years ago continues to leave a large void on the local beach scene.