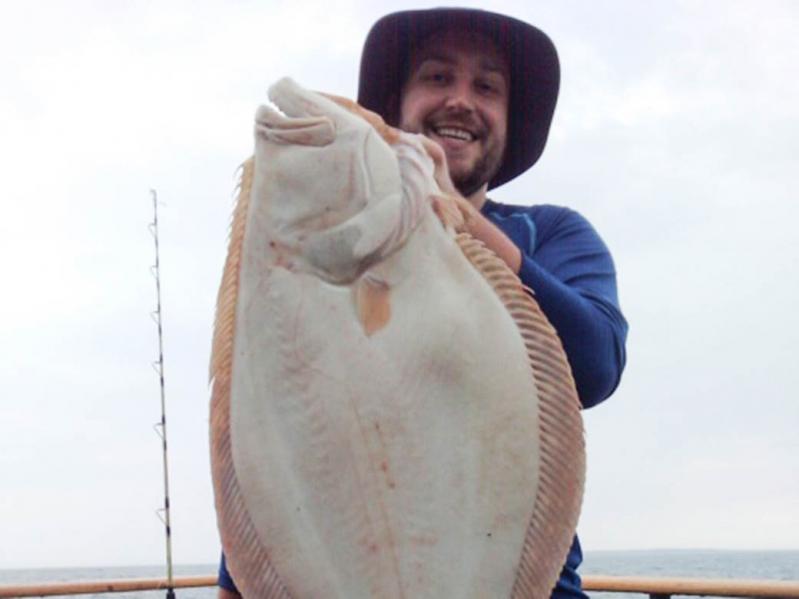 Mike Bergner landed this large fluke on a recent trip aboard the Ebb Tide II out of Montauk.
Savannah Jordan
By Jon M. Diat

The sit-in kayak I’ve had for the past five years is tiny. My ride-on lawn mower is probably longer. As such, it would be a massive understatement to say that my baby blue-colored piece of molded plastic is uncomfortable in more ways than one.

I’m a very tall guy with Sasquatch-like size-16 feet. It does not take a mathematician or physicist to conclude that this does not equate to safely entering, exiting, or just remaining stable when paddling around my nearby back bays, estuaries, and coves. Science has proved that it’s impossible to stuff 10 pounds of potatoes into a five-pound bag.

It’s even reached the point that when I return from a trip, I make sure none of my neighbors are watching. The reason is that trying to extract myself from the kayak is something that would undoubtedly make me an instant YouTube sensation. It’s painful (several pulled muscles), comical (but not for me), and embarrassing.

After doing a ton of research while in pandemic lockdown over the past several months, the good news is that I finally tracked down and bought a 12-foot kayak that can easily accommodate anyone from Hulk Hogan to Wilt Chamberlain. My new battleship, armed with strategically-placed beverage holders, should arrive next week. I pity my friendly UPS delivery guy who has to lug it out of his brown truck.

But before my new kayak arrives, I decided to do one last adventure in my mini floating tub. With a full moon high tide, backed by a brilliant midday sun on Friday, I paddled deep inside a nearby North Haven wetland.

For once, it was beneficial that I was in my small craft, as it enabled me to maneuver to the deepest recess of every narrow creek, where I saw a plethora of wildlife. Ospreys, muskrats, blue-claw crabs, diamondback terrapins, egrets, swans, deer, huge dragonflies, and dive-bombing swallows, were just a few colorful bits of nature I came across. Even with some welts from the sting of several horseflies, the serenity and aloneness made me appreciate just how lucky I was to be where I was, leg cramps notwithstanding. The trip that afternoon was so blissful that I even did it again the following day.

While I eagerly await the delivery of my new kayak, a part of me will miss my old one. For all of its drawbacks in physical comfort, it has given me many hours of enjoyment over the years.

As for the fishing scene, the consensus was that the action for a variety of finfish over the holiday weekend was good for the most part.

“The weather was great and so was the fishing,” said Harvey Bennett at the Tackle Shop in Amagansett. “Fluke is very good at Napeague and porgy fishing remains excellent in all the usual spots. Blowfish continue to chew in Three Mile Harbor, and there is plenty of action with striped bass at the ocean and at the inlets. If you want bigger bass, head out to Montauk where the boats are doing extremely well.”

Looking for weakfish? Ken Morse at Tight Lines Tackle in Sag Harbor says that Noyac Bay has them stacked up, with fish up to nine pounds. “It’s been great fishing,” he said. “And there are plenty of porgies around too and the fluke fishing has been good in the local area too.” Note that anglers can retain only one weakfish over 16 inches per day.

“The warmer waters have spurred on the fishing,” said Sebastian Gorgone at Mrs. Sam’s Bait and Tackle in East Hampton, who added that the crowds of people made for a hectic weekend. “People caught just about everything from blowfish, fluke, kingfish, blues, and porgies.” Gorgone added that blue-claw crabs are on the prowl big time in local creeks and coves, and that the striped bass action in Three Mile Harbor remains solid, with a few keepers making the slot-size restriction.

Out at Montauk, the action for striped bass remains hot and heavy, with a large number of fish up to over 60 pounds being caught and released. As for fluke, the action has had its ups and downs.

“Some days are better than others, but overall fishing has been tough most of the season,” remarked Tom Jordan of the half-day boat Ebb Tide II. “Lots of short fish, but coming across a keeper has been a bit hard.” However, Jordan noted that the angler Bobby Graves was hot one day last week when he landed three fish between five and seven pounds. “There are a lot of really nice sea bass mixing in, which has been a real nice bonus,” he added.

It’s not too late for kids 16 years or younger to sign up for the hotly contested Montauk Youth Fluke Tournament, but they better act fast as the deadline is Wednesday, July 15. Trevor Meehan, who came in second place last year, remains in front with his 3.8-pound fluke, while Finn O’Rourke is in both second and third place with 3.4 and 3.1-pound fish. The tag team of Layla and Tyler Persan are in fourth and fifth place, respectively.

The $25 entry fee in cash or check can be mailed to Capt. Tim O’Rourke, who is once again coordinating the popular contest, at P.O. Box 2120, Montauk 11954. The Montauk Marine Basin is the official weigh-in station.

Proceeds raised will once again go to the Tyler Project, which was established several years ago in Montauk after the passing of Tyler Valcich, to increase awareness and improve the coordination and delivery of mental health services for students, young adults, and families on the East End. Local businesses have already donated $2,500 to this very worthy cause.