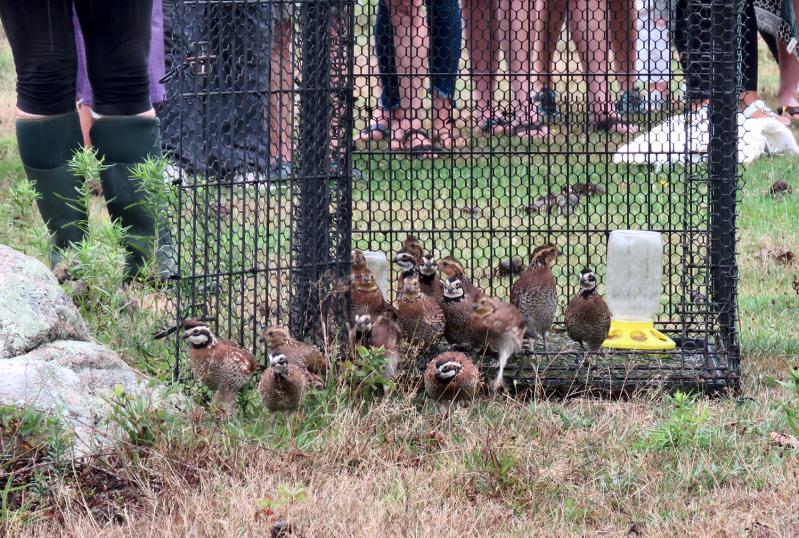 In an effort led by Jessica James, bobwhite quail were raised and then released into the wild in Montauk last year. More are to be released this year.
By Larry Penny

As school kids growing up we learned the names of several common birds from our parents, siblings, and playmates, especially the ubiquitous ones like the crow, blue jay, seagull, and the like. We also learned birds from movies and songs such as W.C. Fields’s “My Little Chickadee” and “Listen to the Mockingbird,” even though when I was a young lad growing up in Mattituck, New York and Long Island didn’t have mockingbirds. Some common bird names stem from the sounds they make, catbirds go “meow,” phoebes go “phoe-be,” peewees go “pee-a-wee,” hoot owls hoot, crows caw, and so on. Some birds derive their names from their habits or colors, for example, kingfishers fish, nuthatches eat nuts (they really don’t!), blue jays and bluebirds are blue.Growing up on the North Fork no one used the word osprey; we called them fish hawks. My grandfather Penny knew a lot about birds, his common name for night hawks was “quark” from the sound they made when flying over, often in the dark. Come spring in the morning we would hear the occasional “bob-bob-white” emanating from a nearby field. We didn’t know bobwhites were quail. Many of us knew that song before we knew it was the call of a bird because we would hear it three or four times a day in the jingle for Rinso, a pre-detergent laundry soap that was a frequent sponsor of radio soap operas. “Rinso White. Happy little washday song.”There were bobwhites around throughout my youth. They were never as common as sparrows and crows, but they weren’t that rare. After my first year at Cornell, I worked at a pheasant and bobwhite farm run by the New York State Department of Environmental Conservation in Ridge. The farm, which is no longer, must have had more than 5,000 of each.Today on both forks come morning you almost never hear that telltale song. Bobwhites are now rarer than pheasants, almost as rare as ruffed grouse. Just as we began to mourn their passing, groups and individuals began to raise and release them into the wild. The Town of North Hempstead in Nassau County was one of the first to take such action, Southold Town pitched in and several Long Island residents took it upon themselves to try their hand at it.One very successful effort was led by Jessica James in Montauk. Her folks summered on the north side of Montauk and when she was still a young girl she began to think about living here year round. She even knew the kind of house she wanted to live in.Well, Jessie has been here for good for some time now and last year she started raising bobwhites. Not only has she led the way, but she has recruited a bunch of other quail raisers, including a fellow bobwhite lover, Terri Berger, who lives a few doors away. Barbara Grimes, a longtime Montauk resident as well as a longtime veterinary technician, has also joined the effort, as has the Montauk School and the Montauk Library, led by Sally Krusch, president of Friends of the Montauk Library. This later venue will not only help raise bobwhites, but will set up a webcam to broadcast the carryings-on of the baby quail so that people can view the entire process from hatching to release.So far this spring, Jessie and Terri, with help from the Montauk School science lab, have already hatched and raised 100 bobwhite juveniles, some of which will be released in the presence of the school’s third and forth grades. The two have another 120 eggs under incubation for round two.A miraculous sign from Montauk’s heavens was witnessed two weeks ago when a female bobwhite in prime condition wandered into Jessie’s yard. Was it one of those raised last year and released more than a mile away? Jessie thought for a moment, then released a male bobwhite she has on reserve. It immediately went over to the encroaching female, apparently successfully so, and in short order the two sauntered off together side by side.In quail, pheasants, turkeys, and sage grouse, reproduction is almost entirely up to the females, to the hens, so to speak. After mating, the female is on her own. She makes the nest, lays the eggs, hatches them, and raises the chicks. Apparently, that’s the way God and evolution made it. Ooops, I have to stop writing now, my wife wants me to do the dishes and take out the garbage.Larry Penny can be reached via email at [email protected].

Bobwhites are now rarer than pheasants, almost as rare as ruffed grouse