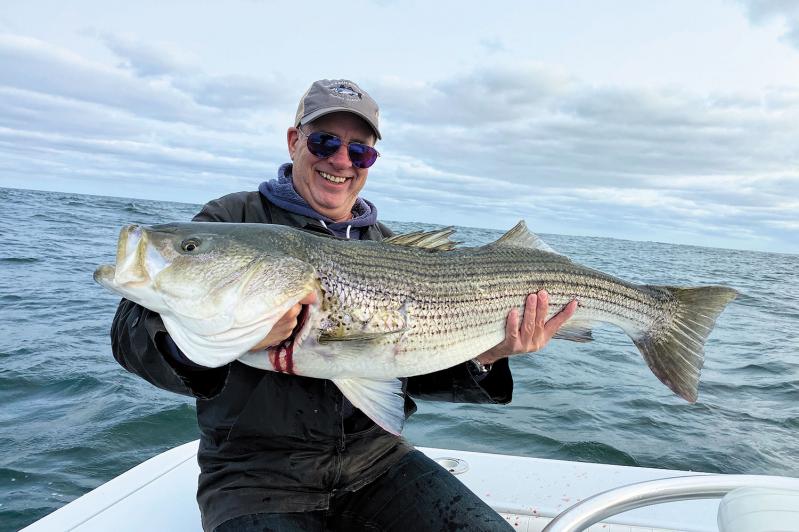 David Silver caught and released this 30-pound striped bass on light tackle off the Montauk Lighthouse on a recent trip with Gunkholin Charters.
Capt. Merritt White
By Jon M. Diat

Last Thursday, it was time to take my motorcycle out for a long ride. I usually put about 1,000 miles on it every year, mainly during the warmer months, but in checking my odometer, I realized had only traveled a little over 500 thus far.

It's clear that the pandemic has played a significant role in its lack of use, as part of the reason for riding is usually to run a variety of errands or head off to my boat or the tennis courts. One would never confuse me with a renegade like Dennis Hopper or Peter Fonda in the movie "Easy Rider." I've never been to the motorcycle rally in Sturgis, S.D., nor do I own a leather jacket or a good pair of boots. I'm pretty much a dork on wheels. But I do love to ride, no matter my choice of attire.

That said, the North Fork was my destination, as I knew the warm weather we have longingly embraced in the final days of summer was about to be broken later that evening by a sharp cold front barreling down from Canada. Accompanying the significant drop in temperatures, were to be stiff winds from the north and eventually the northeast. Worse was the fact that the gusty breeze was predicted to remain strong for nearly a week.

Fishing would be out of the question for the foreseeable future, and that was only compounded by the fact that major Hurricane Teddy lurked offshore, throwing off large swells that pounded our ocean-side beaches. The lousy forecast finally prompted me to remove the lobster traps from the stern deck of my boat, as the season for the crustaceans closed right after Labor Day.

After traversing the two ferries of Shelter Island, I made a decision to head east in Greenport and ride along the northern shoreline of picturesque Orient Harbor and Hallock's Bay before finally ending up at the Orient by the Sea Marina.

The marina, which lies at the easternmost tip of the North Fork, is situated in a tiny man-made harbor comprised of about a dozen party and charter boats, along with an equal amount of recreational craft. I timed it just right to see several boats tie up after a day on the water.

The fishing was good, and the smiles were wide on the anglers offloading their gear, as coolers full of porgies and sea bass were lugged back to cars for the long ride west. Bluefish and a few striped bass could also be seen, too large to completely fit inside the containers.

"Plenty of fish today," said a patron of one of the boats, as I idled on my bike taking in the scene. "It's a long drive from Queens, but it's so worth it. Lots of fish to share with many friends." He nodded and waved as he closed his car door.

Looking to the west, I noticed that the skies had darkened considerably and that rain was a distinct possibility. I was surprised, but it made sense to cut the trip short and head back home, as it appeared that the cold front was making its arrival a bit earlier than expected. By the time I reached the line to the North Ferry, it had started to rain.

The next few weeks will afford some opportunities for longer rides on the bike before the weather gets too cold. Montauk is next on the agenda, as well as a scenic ride through Springs. But I will take the rain jacket just in case.

On the fishing front, the gusty winds have made it a challenge for many anglers, whether fishing from boat or shore.

"The winds have made it tough for people to get out, and the waves from the hurricanes have really churned up the ocean beaches," observed Harvey Bennett at the Tackle Shop in Amagansett. "But there are still plenty of snappers around, and the porgy fishing has been very good. Three Mile Harbor still has blowfish and kingfish, and one guy jigged up some squid the other night in Fort Pond Bay."

Before the blow, Bennett said that the false albacore action was building all the way from Accabonac Harbor, eastward to Montauk Point, and that there were plenty of bass and blues in the rips off of Montauk. "Fish should now be on the move with all of this wind," he added. "Fall is now here and the fishing should really be strong."

"With this wind, the reports have been few and far between the past few days," said Ken Morse at Tight Lines Tackle in Sag Harbor. Morse said that a few small bass were on the north side of Montauk over the weekend and there were plenty of bluefish at Jessup's Neck on the incoming tide, but that the action in the surf was off due to the rough seas. "On Sunday, the waves were up to the dunes in Southampton."

Looking for fluke? You better act quick, as the season come to an end on Wednesday. In the hotly contested Montauk Youth Fluke Tournament, Emily Bruno remains on top with her husky 10.88-pound flattie, while Hayden Elliot holds down second place with an 8.66-pound fish. Cathy Larson follows with her fish of 4.04 pounds, while Trevor Meehan is close behind with a 3.86-pound fluke.