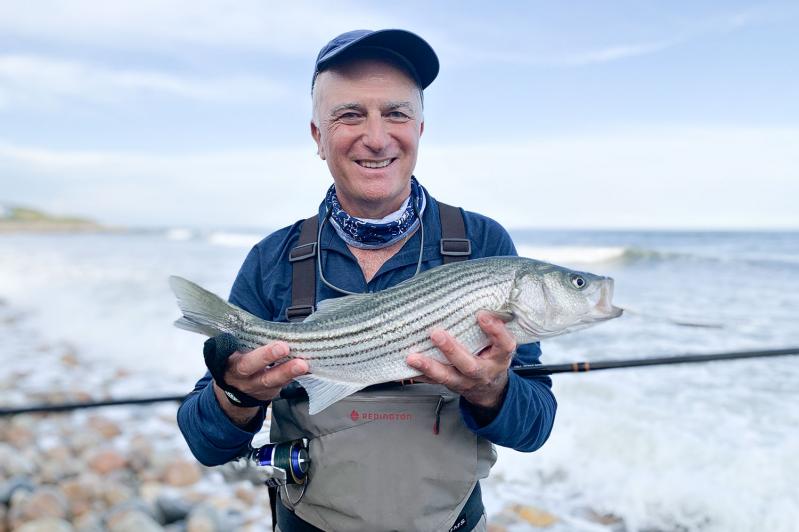 Back in 1958, a young Eddie Cochran came out with a song called the "Summertime Blues." With its catchy chorus refrain -- "But there ain't no cure for the summertime blues" -- it roared up the charts and was a huge hit. A multitude of prominent musicians and groups like the Beach Boys, the Who, T. Rex, and even Olivia Newton-John, have since covered the song. Sadly, Cochran died in a car accident after performing a concert in England two years later. He was only 21.

While the lyrics themselves cite a midsummer, blue collar-struggle between a teenager, his parents, boss, and a congressman of all things, the rhythmic tune always seems to gently creep into my mind this time of year. For said scribe, it conjures up the lazy, hazy days of summer. Or more aptly in my case, a hot, windless afternoon on the water, with intense sunshine beating on the back of my neck and nary a nibble or tug on my fishing line. With conditions like that, it's tough not to feel blue and a bit sunburnt.

As we enter the apex of the dog days of summer, the fishing scene has shifted into a lower and slower gear. "Fishing is clearly in summer mode," said Ken Morse, the proprietor of Tight Lines Tackle in Sag Harbor. "While some weakfish, porgy, and a few kingfish are around locally, the better fishing now is off to the east where the waters are cooler." Morse said that those fishing at Gardiner's Island and points eastward, are having some success with striped bass, bluefish, porgies, and sea bass in reliable quantities.

"Yeah, it feels like the summertime blues for sure," agreed Sebastian Gorgone, the owner of Mrs. Sam's Bait and Tackle in East Hampton. "It's the typical midsummer mix of fish right now. Nothing terribly exciting, but I will say that the crabbing for blue claws has been very good. It's been a challenge just to keep up with the demand for nets and traps."

At the Tackle Shop in Amagansett, Harvey Bennett was also in tune with the hot and muggy weather and placid fishing scene. "Pretty much the same as last week," he said. "Porgies are around and there have been some nice sea bass taken on the east side of Gardiner's Island. Some fluke continue to be had at Napeague, and striped bass on the beach has been okay at times.

"Hey, it's summer," he quipped. "Like people, fish too can get a bit lethargic at times."

Out at Montauk, fluke fishing, which had been in a funk long before the summer blues began, finally perked up with the hot weather over the weekend. It was a welcomed sight for many.

"The fishing has definitely picked up on both fluke and sea bass," observed Capt. Jamie Quaresimo of the Miss Montauk II, a full-day party boat. In recent days, good drifting conditions in the cooler Atlantic Ocean waters allowed a number of anglers to get their four-fish limits, with fish up to 10 pounds landed.

On Saturday, the veteran captain pitched in as first mate to join his son Tyler on his charter boat, Simple Life. Fishing was excellent all day with a full limit of both fluke and sea bass taken by the crew.

"This weekend saw big sea bass and jumbo porgies in every bucket, along with some nice fluke," said Capt. Tom Jordan of the Ebb Tide II. Jordan added that Savannah Jordan, his wife, who serves as first mate on the half-day boat, has been busy of late. "After some trips she is cleaning fish for over 90 minutes. And, she's fast too!"

Conversing at the ticket booth of the half-day party boat Lazybones, Kathy Vegessi, confirmed the recent uptick in fluke catches. "Catches have improved," she said. "Mixing in with the fluke have been some really big sea bass too."

On the skinny water scene, Capt. Paul Dixon of To the Point Charters out of East Hampton reports good fishing of late for his clientele of fly cast enthusiasts. "Fishing the flats has been good when we have the sun," reported Dixon, who is featured in a current profile story in Forbes.com on his experience and expertise as a one of the premier guides on the East Coast. "Otherwise, we've been playing with mongo-sized bluefish out at Montauk."

High speed and fog is never a good combination when out on the water. Unfortunately, those components played a big part in a boating accident that occurred about a mile north of Montauk Inlet early on Saturday morning. At around 6:30 a.m., a 40-foot sportfishing boat, traveling at a high rate of speed in dense fog, rammed into the forward-port side of the Petrel, a 40-foot dragger. The Montauk-based trawler sunk in a matter of minutes.

The Coast Guard said that no significant injuries were reported. But the incident serves as a strong reminder that boats need to proceed with extreme caution when operating under such conditions. Years ago, I too experienced a close call with a large speeding boat running recklessly through Plum Gut in pea soup fog.

I certainly was not singing the blues after that experience. I was grateful to have been lucky enough to escape harm.

Hoedown on the Farm, Cocktails in the Garden
Main Beach Free Concerts in Final Weeks
Services and Counseling After Death of Popular Teacher Assistant
END_OF_DOCUMENT_TOKEN_TO_BE_REPLACED