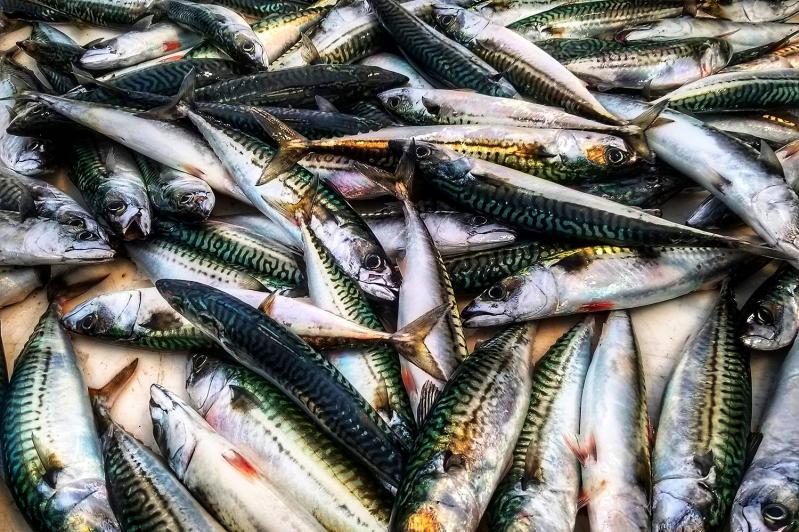 Mackerel have shown up in large numbers off Montauk.
Capt. Savio Mizzi
By Jon M. Diat

Thanksgiving was certainly different this year. With the exception of my 94-year-old mother, who has basically been in self-quarantine at her house in Manorville since March, we did not invite any other friends and relatives to share dinner with us because of the pandemic. For many reasons, it was a bit surreal sitting at the dining room table taking in the surroundings.

As I took a bite of turkey with a bit of mashed potato, I glanced at the two Christmas trees Terie had put up a week earlier in an effort to bring in some premature holiday cheer. The weather was also exceptionally warm, which seemed out of place with the twinkling lights and shiny ornaments that adorned the plastic branches of the balsam fir trees.

The outdoor thermometer said it was an exceedingly balmy 63 degrees, only a dozen less than it was in Orlando, about 1,200 miles to the south. Frosty the Snowman would have quickly melted into a puddle if he had been on our front lawn.

Inside the house, with the oven going full blast in the kitchen for several hours, I could have worn my tennis shorts at the table. The long-sleeve flannel shirt I wore felt more like a damp rag. I was attired for the wrong season and reason.

Looking slightly to my left at bucolic Shelter Island Sound, I heard a boat, not yet in view, likely heading toward Sag Harbor. I thought nothing of it. It was probably someone taking a late season, last ride on the water.

"Is that someone water-skiing?" my mother uncertainly said. Not believing her, I remained focused on my next forkful of stuffing. Food is important to me.

"Oh my, it is a water skier," she said in a more forceful and commanding voice. I put the fork down. She was right. It was indeed a water skier having the time of his life. Never doubt your mother. Lesson learned once again. The boat and skier quickly faded out of view as it rounded Kelly's Point.

In this bizarro-world of 2020, this Thanksgiving fit seamlessly into place. It was unordinary in every way. There was still much to be thankful for, even though it felt more like a scene out of summer.

As for fishing, many remain thankful for the great action. While striped bass can still be had from the ocean beaches (Sunday afternoon saw a classic bass blitz from Bridgehampton to Southampton), Montauk continues to be the main port of call for fishing activities, especially for blackfish, sea bass, porgies, and cod.

"Blackfish and sea bass fishing remains very strong," confirmed David Reutershan at Westlake Marina in Montauk. As for actual hot spots, Reutershan chuckled that it's tough to extract accurate and honest information from fishermen, especially those who covet blackfish and the location of their rocky lairs.

"When I see some of the guys getting off the boat after a day of blackfishing and I ask how they did and where did they go, they seem to freeze in trying to give some kind of answer," he said with a smile. "I think fishermen all have a lying gene built into them. I don't bother asking anymore."

Suffice to say, spots like Southwest Ledge, south of Block Island, and the Cartwright grounds six miles south of Montauk, are the usual spots where the secretive blackfish clan usually gather. To illustrate the point, Sam Doughty of East Hampton went on his boat on Sunday morning and returned with a nice catch of blackfish, cod, and sea bass. Again, origin unknown.

Mackerel have also shown up in force in Montauk waters. Capt. Savio Mizzi went out for a final trip on Friday looking for stripers, only to return with a tote of the popular oily-fleshed fish. "I only got one small bass, but the mackerel were everywhere feasting on sand eels," the less-secretive Mizzi noted. A holiday treat, smoked mackerel is hard to beat.

Those who prefer to fish under a moonlit sky have also been rewarded with good catches of squid, with a nice amount of herring in the mix. Montauk Harbor, Fort Pond Bay, and Three Mile Harbor have been the confirmed hot spots for the nocturnal crowd.

"Still a good number of stripers up to 31 inches being taken from the beach," said Harvey Bennett, the ever-boisterous owner of the Tackle Shop in Amagansett, who opted for fresh blackfish instead of turkey for his Thanksgiving meal. Bennett said that just about any spot from Napeague heading westward has produced, with the night tides seeing larger fish in the wash.

"The water is still warm for this time of the year, so the action will likely continue for several more weeks," he added before heading out on Monday morning for a final chance in the field to bag a turkey before the season closes tomorrow.