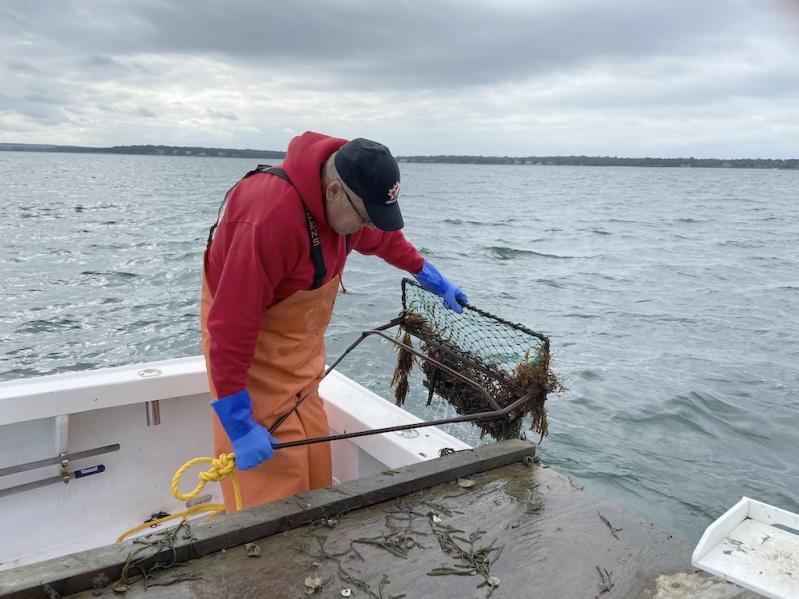 The Star's "On the Water" columnist, Jon M. Diat, took an exploratory trip with his scallop dredges in advance of the opening of bay scallop season. What he found was discouraging.
Terie Diat
By Jon M. Diat

"So, are there going to be any around?" A faint acquaintance beckoned to me as I exited the hardware store the other day, inquiring about the upcoming bay scallop season. "Let me know how it is," he added before entering his pickup truck. "I'm happy to buy any you get. I hope there is hope this season."

Over the past few months, I've lost count of the number of people, including my own dear 94-year-old mother, who have asked me about the prospects for the scallop season.

The season in state waters for the harvesting of the prized shellfish opens on Monday. Those in the town of East Hampton will have to wait until sunrise on Nov. 8 to begin to gather their fair share. But the jury is out on whether there will be enough around to make the effort worthwhile.

Last season was a disaster. Just prior to opening day last October, I did an exploratory trip on my boat that resulted in a grand total of just three adult scallops after nearly three hours of dragging the several iron dredges I possess on state bottomland (recreational folks are allowed to retain one bushel of scallops per day). Clearly, it was a no-brainer that it was [necessary] to return those dredges to my basement for the next 12 months. For all practical purposes, the season was over before it even started.

Much like last fall, unfortunately, the murmurs, whispers, and rumors dockside and along the wharfs indicate that another poor season lies ahead. Whether the talk is just a ruse to dissuade people from even venturing out on the water sometimes needs to be taken into consideration, but enough people who I trust can't be outright liars.

Saturday was the day to play explorer once again. With two dredges and a culling board laid across the stern of my boat, it was time to see if the upcoming season would be boom, bust, or perhaps something in between. Exiting the breakwater of Sag Harbor, I turned east, and then ultimately north, south, and west in my pursuit. Over the next three hours, I covered many areas on the calm bay waters.

Sadly, it did not take long to see that the hope for a bountiful harvest of scallops would very much mimic the unfortunate events that have unfolded in the black cloud that is 2020. My back-breaking work resulted in a measly haul of four adult scallops -- one more than last year. In addition, on Sunday a few members of the Sag Harbor Fire Department Dive Team did some underwater searching off Long Beach in Noyac Bay and came up with a similar number of scallops. While it's possible a few pockets of the shellfish may be found in state waters when the season starts, it's pretty certain that over all, things look bleak.

While there were a decent number of small scallops, also called "bugs" by baymen, that showed up in my end bag, I saw the same phenomenon last fall. There obviously was a decent spawn this June, but what happened to the adult scallops? It was if they disappeared. No dead shells. Nothing to show that they had even existed.

The dredges that have served me so well for many decades still remain on my boat, but by this weekend they will return to the basement for another premature slumber. I did sprinkle a dozen or so bugs around the boat upon returning to my dock on Saturday. In my own little marine science experiment, I will be curious to observe their growth over the next year to see if they will survive. Fingers are crossed for a better 2021 for the scallops, and just about everything else for that matter.

Things are a lot more positive on the fishing scene. The fall run is on, and the fishing, whether from boat or shore, has been superb for several species by all accounts. Montauk remains a hot spot, with anglers arm weary from a bountiful catch of striped bass, sea bass, and blackfish.

"The bass run has been really strong along all of the ocean beaches," said Sebastian Gorgone, the proprietor of Mrs. Sam's Bait and Tackle in East Hampton, on Monday. "For those who paid their dues the past few months with not the best of fishing, they are now being rewarded for their efforts. It's been great."

The lure of choice for those plying their trade along the shore have been small diamond jigs adorned with a teaser tied above. The killer combination has resulted in double-headers of bass with a good number of keepers on the line (anglers are allowed one fish per day between 28 and 35 inches).

Gorgone has also been equally enthused about the excellent bite going on for blackfish. "It's been hard to keep green crabs in stock," he said of the popular bait utilized to catch the toothy, bait-stealing fish. "The fishing has been excellent in all rocky areas."

"Bass, bass, and more bass," exulted Harvey Bennett from behind his well-worn perch at the Tackle Shop in Amagansett. "The fishing along the ocean has been fantastic. Let's hope it lasts for the next few weeks." Bennett agreed that diamond jigs are the hot lure, but that plugs and bucktails land their share of fish as well.

"The waters are still warm -- about 63 degrees -- so unless we get some really cold weather, the fish should hang around for a long time, but every year is different," he added. "Sea bass and porgies are running well off of Montauk, and the action for blackfish has been the best in many years. Get out and fish!"