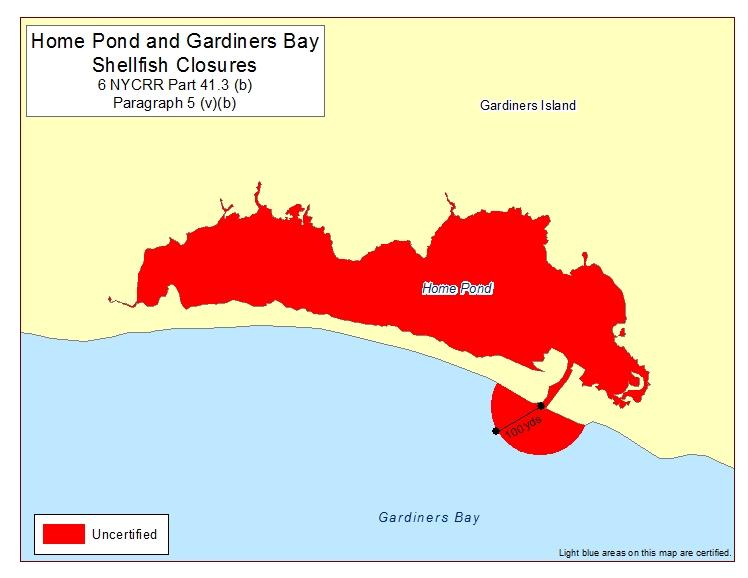 The New York State Department of Environmental Conservation has reclassified two areas in East Hampton waters to restrict the harvesting of shellfish.

An area of Three Mile Harbor adjacent to the Harbor Marina and the town dock, bordered by Harbor View Lane to the north, the town dock to the south, and Sedge Island to the west, was previously closed between May 15 and Oct. 15. That period has been extended and is now closed from April 1 to Nov. 30.

On Gardiner's Island, Home Pond is now unclassified, or closed year round to shellfishing.

The D.E.C. reclassifies shellfish harvesting areas in Suffolk and Nassau Counties based on year-round water quality monitoring and other data in order to protect the health of those consuming shellfish. Sources of pollution that contribute to poor water quality include stormwater runoff, leachate from septic systems, animal waste, and discharges from vessels, which is illegal.

The reclassification in Three Mile Harbor is a result of the extended boating season in the area. "Findings have shown that marinas and boaters in this area are operating earlier in the year and for a longer period throughout the year," a statement from the D.E.C. said.

John Aldred of the town trustees told his colleagues on Oct. 16 that the reclassification followed the D.E.C.'s discussions with officials of the Harbor Marina. Another area to the north, by the Sunset Cove Marina and the boat basin adjacent to Folkstone Drive, remains closed to shellfishing between May 15 and Oct. 15, according to the D.E.C.

"They feel as though, generally, the boating season has widened out because of warmer weather," Mr. Aldred said of the D.E.C. The reclassification in Three Mile Harbor is "not necessarily tied to water quality data."

The closure of Home Pond to shellfishing is a first on Gardiner's Island, Mr. Aldred said. The D.E.C.'s sampling station there, he said, is in Gardiner's Bay, outside the creek connecting the bay and the pond. The D.E.C. "keeps open or closes areas [based] on long-term average fecal coliform data," he said, and has observed spikes in fecal coliform bacteria since it started sampling there in 2013. "But in 2019, in particular, they had some very high spikes. Based on their method of calculating whether an area needs to be open or closed, the numbers showed this needed to be closed." A high concentration of waterfowl is a possible culprit, he said, as is higher-than-average rainfall in 2019.

The D.E.C. monitors water quality throughout the state's marine district as part of its participation in the National Shellfish Sanitation Program. Descriptions and maps of landmarks and boundaries for the reclassified areas, as well as the new dates of the seasonal closure, are on the D.E.C.'s website.