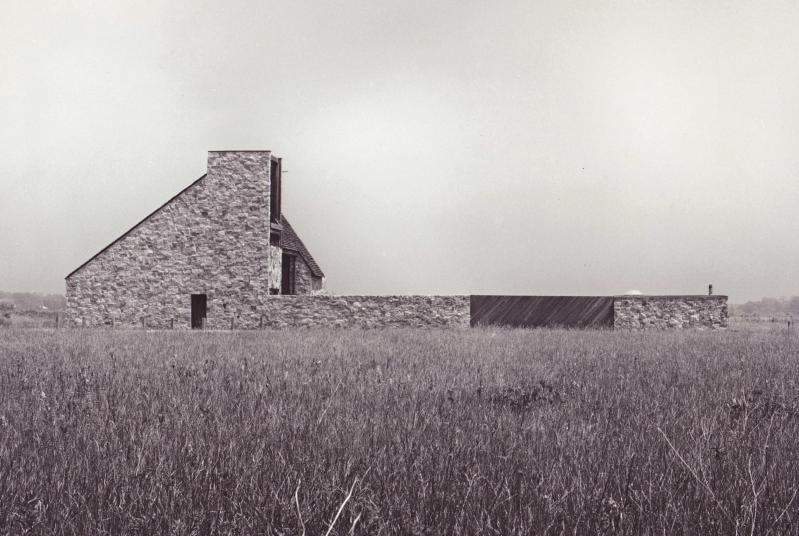 Norman Jaffe designed this avant-garde 1969 house in Wainscott for Harold Becker, a photographer and filmmaker.
Courtesy of Alastair Gordon
By Geoff Gehman

You never forget your first unforgettable house. Mine resides in a former potato field on an ocean road in Wainscott, hidden behind a sloping stone wall topping out at 30 feet. I watched this saltbox fortress being built, chiseled rock by chiseled rock, in the summer of 1969, the season of Woodstock rockers and moon walkers. A half-century later I’m still hooked by a place seemingly made by masons from outer space.

Located on the edge of Wainscott, the saltbox fortress was in the middle of my South Fork hall of fame. There was the Sagaponack resident Truman Capote, my first literary hero. The Bridgehampton native Carl Yastrzemski, my first baseball hero. The Long Island Automotive Museum in Southampton, where I fell under the spell of antique cars. The Bridgehampton Race Circuit, where I fell under the spell of fast cars. The East Hampton Star, which made me want to write for newspapers after a 1968 article by Jack Graves that turned a burglary at Capote’s home into a spoof of Capote’s “In Cold Blood.”

All these forces forced my curiosity to grow up fast. That curiosity, in turn, forced me to confront the saltbox fortress as a riddle that needed solving. My sphinx, it turned out, was the vision of two creative envelope rippers. Harold Becker, the client, photographed naked women as artistic abstractions and directed short documentaries about Eugene Atget, the revolutionary street photographer, and Reverend Gary Davis, the revolutionary blind blues-gospel singer and guitarist. Born in 1928, the New York City native is best known today for directing such feature films as “Sea of Love” and “City Hall,” the latter co-written by Bo Goldman, who in the 1960s co-owned a Sagaponack seafood shop where Becker bought lobster salad.

Norman Jaffe, the designer, treated the East End as a laboratory for an innovative kind of landscape architecture. Born in 1932, the Seattle native made his residences embrace the area’s natural resources: the painterly light, the seamless junction of earth, sea, and sky; the cozy, crazy lines of saltboxes. For a Bridgehampton client he created a thrusting, rectilinear cruise ship moored on grassy dunes. Another Bridgehampton client, the composer Sascha Burland, author of the “What’s My Line?” theme, commissioned two of Jaffe’s modern Colonials: a shingled farmhouse with a sheltered porch cut into the roof and a cutout, cubistic saltbox.

Becker said he gave Jaffe four must-haves for his weekend retreat on four acres of Wainscott pasture he bought for $36,000, which today will buy you a month’s summer rental in some East End neighborhoods. He wanted rugged comfort, natural materials, a robust scale, and a fluid connection to the outdoors. Jaffe found his inspiration for Becker’s home in an uninspiring model: a farmhouse with a collapsed gable in an Irish meadow.

Back in America, he turned ruin into lightning rod. He outlined an abstract castle with a very prominent, very high gable. He joined the windowless facade to a low, long stone-and-wood fence, sketching the silhouette of a sailboat. He placed the structure parallel to the road to follow the pasture’s horizontal flow, maximize privacy, and frame ocean views. He sheathed the shell in stones harvested near the Delaware River, a half-hour from my Pennsylvania home. The rusty, tawny rocks expressed Jaffe’s belief that the organic use of organic resources intensifies, and unifies, timelessness and otherworldliness.

Indeed, my planets shifted every day I watched masons build the Becker House’s walls, cutting stones to fit on site, transforming a plain pasture into a lively quarry. The tall wall, I soon discovered, was quite vibrant. It hummed in the morning shadows, shouted in the afternoon sun, sang in the saffron light of early evening. At night it became a blue-black ghost pierced by a glowing doorway, a magnetic beacon on a road without street lamps. The torch-like effect helped me understand why my Irish relations were so thrilled when electricity came to their rural region in the 1950s, when merely switching on a light in the dead of evening was an act of magic.

Made of inflexible materials, the Becker House was remarkably flexible, imitating everything from a modern medieval barn to the back of a huge fireplace. The place not only took my breath away, it blew me away. It was simpler, smarter, and much more dramatic than the Rubik’s Cube boxes and Tinker Toy cat’s cradles that blighted South Fork potato fields. It was sublimely outrageous, a Zen shout.

In the summer of 1969 it seemed I was the only one hypnotized by Jaffe’s fantastic fantasy. Loitering in Wainscott’s one-room post office, which was around the corner, I heard locals denounce the Becker House as “a sheep shed” and “a f—-ing folly.” At the time I was too shy to set them straight. I was also too shy to walk the long driveway to the saltbox fortress, knock on the door, and request a tour of my sphinx. A budding purist, I worried that what was behind the walls wasn’t nearly as exciting as the walls themselves, that behind that stone curtain the mighty Oz was really meek.

I finally saw all of the Becker House in the August 1972 edition of House & Garden magazine. The generous spread left me feeling as deflated as the Yellow Brick Road gang. The living room was cluttered and cramped, a combination of cabin loft and airport lobby. The crow’s-nest loft, however, was very cool. The massive slanting skylight mimicked the viewfinder of a camera, an excellent illusion for an owner who used an antique view camera to shoot female landscapes.

The loft only looked cool. Five decades later, Becker chuckled at the “nightmare” skylight that transformed the crow’s nest into a leaky sauna. He remembers Jaffe shrugging off problems as the price of innovation. When clients nagged him about fixing flaws, the architect liked to repeat what Frank Lloyd Wright — whose sister, the illustrator Maginel Wright Barney, is buried in Wainscott Cemetery — told a client who nagged him about repairing a dripping ceiling: “Get a bucket.”

The Becker House was Jaffe’s first stone structure, his first award-winning design, his first landmark. It was my first landmark, too. It taught me that rule-bending buildings can change your mental space, your emotional compass, your perception of the relationship between nature and human nature. It made me an architecture addict with an insanely wide fondness for crafty, crazy buildings on the East End. A cement factory converted into a residential studio. A potato barn converted into a baronial bunker. A church shaped like a whale. A poultry store shaped like a duck-sphinx.

I visit the Becker House every day I stay in Wainscott. I stare at it with misty melancholy, and not only because it looks less imposing behind a hedge and floodlights. I feel sad that Becker sold it in the 1980s, mainly to distance himself from the junk-bond “locusts” who erected country-club-sized ego monuments. I feel worse that Jaffe drowned in 1993 in the Atlantic after piling his clothes neatly on a Bridgehampton beach. A notoriously bad swimmer, he took lessons from Becker in the Becker House’s pool.

It took me 33 years, but I finally solved the riddle posed by my sphinx. After a second phone conversation with Becker, I suddenly realized that the Becker House was kin to my first favorite home, a 1920s Tudor built into a cliff-cave in New Rochelle that my father sold to finance our Wainscott residence. In that Tudor-on-the-rocks I imagined myself as a cowboy in the Sierra Nevada, printed Play-Doh comic strips in a secret bedroom cubbyhole, met my newborn sister for the first time, and shared some of my parents’ happiest days together. It was my castle, my fortress, my imaginarium.

Geoff Gehman is a journalist who wrote about his Wainscott sphinx in the memoir “The Kingdom of the Kid: Growing Up in the Long-Lost Hamptons” (SUNY Press). He lives in Bethlehem, Pa., and can be reached at [email protected].