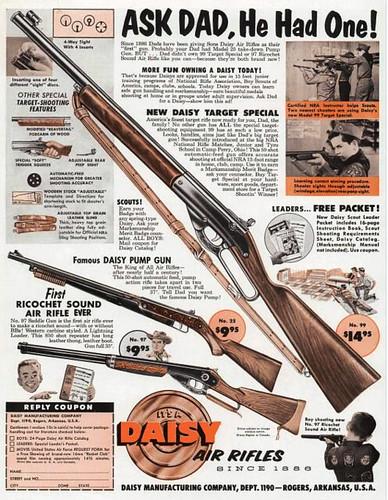 What is it with guys and guns? Isn’t it crazy? I mean do you think it’s the sexual association alone? Is it just the constant media din about “being a man”? Or maybe too many John Wayne movies? Who knows? I can only tell you what made me a fan.

Guns were totally anathema in my father’s home. That is, until his second son arrived, in the person of me. The cutest picture of me was as a 5-year-old in full cowboy regalia, with a six-gun holstered to my side and the beginnings of a sneer contorting my freckles. That pose was inspired by Mutual Radio, three times a week, when we heard “From out of the past come the thundering hoofbeats of the great horse Silver! The Lone Ranger rides again!”

It was 1943 and the first year my parents could afford a summer out of the city. They rented a bungalow only 30 miles away, with a lake, a communal well with celestial drinking water, and a day camp. It was in that camp that I met my first love, Leila Cherney. An 8-year-old redhead with pigtails and a mass of freckles in place of a face.

Her folks’ bungalow was about 50 yards behind ours, with a small apple orchard between. Every morning we walked together, sometimes hand in hand, to the glade around the well, where about 10 other “Robins” gathered for the camp day. There we were read stories, played tag, and ate cookies with milk always accompanied by Prokofiev’s “Peter and the Wolf,” danced, and returned home together. Best friends.

But even in Arden World War II dragged on, and my boy friends and I waged daily mock gun battles. One evening I ran to Dad with a big request: It was time for a real BB gun. I had seen an ad for a Daisy rifle picturing a boy happily knocking tin cans off tree stumps. The ad led to several weeks of persistent whining. Even my brother, Joe, a serious boy five years my senior, joined in begging for the gun. It was so against my father’s grain it took almost a month before he relented. Some days later, he emerged from his commute with a box reading “Daisy Air Rifle.” What a dad!

At first it seemed my brother’s gun, he used it so much. I didn’t care. We spent all our after-camp time shooting at cans, and when that paled, at squirrels, and when that became tedious, at rocks. But gradually, none of it stayed interesting. Before long we shot only intermittently, then not at all. We’d run out of targets.

One September night I wandered out on our back porch, alone and bored. In Leila’s bungalow, where she sat with her back to me, a lamp shone, illuminating the outside and a flowerpot on the windowsill below her seat.

I thought, without thinking, “I’ll shoot that pot.” I knew it was safe because, except for her head, which was three feet from the pot, Leila was entirely covered by her high-backed chair. I felt giddy, suddenly, with the prank’s potential. I could brag tomorrow about the possible “danger” avoided by my expert marksmanship. Bask in Leila’s pride at my handling a gun so well. And share giggles when I fessed up.

Walking back into the bungalow, I got my Daisy, loaded it, and returned to the porch.

The evening was preternaturally silent. No birds, no cicadas. My own breathing seemed cacophonous. I took aim at the pot, but my sighting wavered and I couldn’t draw a steady bead. So I placed the gun on the railing and bent to aim again. After a second or two I had the pot lined up perfectly and gently squeezed the trigger. The air gun’s report punctuated the silence. Leila certainly heard it because she immediately stood and walked away.

I remained on the porch several minutes trying to confirm that I’d hit the pot, to no avail. It didn’t matter. I’d done a powerful thing.

Chortling, I retuned the gun to its closet and joined the group in the living room. By 9 p.m. I was in the bedroom I shared with Joe, fast asleep. What awoke me were the lights: plates of red and white revolving unevenly on the wall. I jumped from bed and ran to the front porch. In the yard was a police car with rosettes twirling around its roof.

My father and mother stood in a huddle with two agitated people and two formidable state troopers. My brother was off to the side with someone I couldn’t place, until I peered for a longer moment and recognized Leila, with a huge bandage swathed around her head.

Grasping what had happened, I ran back to the bedroom and flew under the covers, head and all, thinking that somehow no one would find me in the cocoon I’d created. I lay for a moment, invisible and safe, until my brother came in and pulled the covers off me.

“Right, except shoot someone in the head, schmuck. You should see what you did. They’ll get you this time!” He slammed the door behind him.

I was left in the room by myself. Now a fearsome silence enveloped me, then accused me, prosecuted me, and judged me. I’d shot a person in the head! Would the police arrest me? Would my parents renounce me altogether? Would I have to live in reform school with all those tough kids I’d seen in the movies? Would Leila speak to me again? I prayed. If I could only get out of this fix I’d be good. But the room stared back, mute, punishing.

An eon later, my mother and father opened the door. Father looked at me with disgust, BB gun in hand. “So, you wanted a gun? Good, you’ll never see this one again! Do you know what you did? You could have taken out an eye, or worse, killed her. What got into you?” Turning, he stomped away with the gun, the gun I, indeed, would never see again.

Mother was teary and took me in her arms. If ever I needed her, it was then. She embraced me and stayed, without a word. Eventually, through the door, I saw the police car leave, then Leila and her parents. Silence restored.

I didn’t go to camp for two days, afraid to bear the humiliation and disapproval I knew waited there since, by now, the entire bungalow colony must have understood what a thorough reprobate I’d become.

On the third day my mother convinced me to return. I dragged myself to the glade by the well, circuitously so as not to bump into Leila. Arriving very late, the Robins were already scattered on the grass listening to “Peter and the Wolf” and eating snacks. I greeted no one, kept my eyes on the ground, accepted my snack without a word, and sat down apart from the group, miserable and repentant, but with no one to repent to.

Long minutes later, when the story got to where the bird flies into the tree to escape the wolf, I felt a stirring. I looked up. It was Leila. Sitting down next to me, her red hair interrupted now only by a small Band-Aid, she leaned into me and offered an Oreo. “You know this flute part is my favorite,” she smiled.

I made up my mind, then and there, to love her forever.