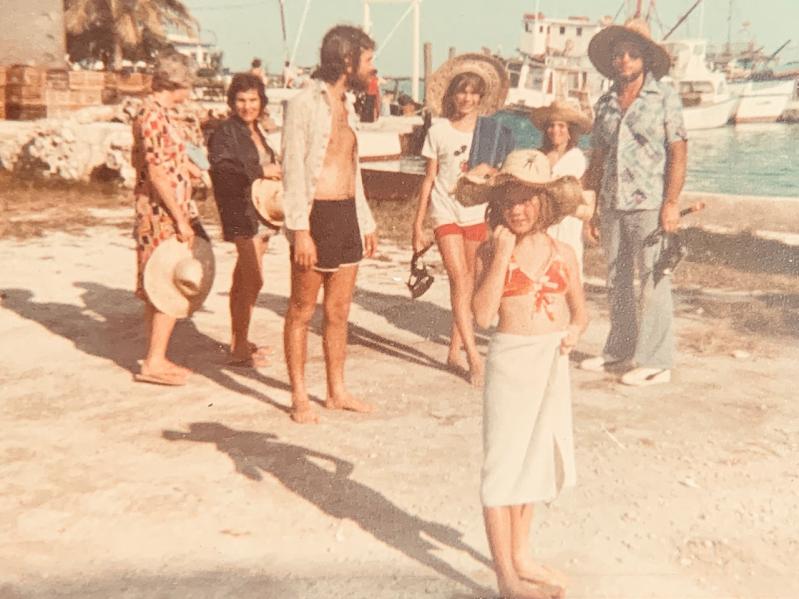 The Grover pirate crew in the Bahamas in 1977. The author appears in the foreground wearing a straw hat.

I’ve always loved disaster films, I just never hoped to be living through one. A few years ago, I heard Max Brooks (the son of Mel Brooks and Anne Bancroft) on NPR talking about how he became a writer of zombie books and a sought-after consultant on epidemics. It turns out that his celebrity parents had an apocalyptic plan in place, just in case, and would ask questions over dinner like, “At what point would we eat the family dog?”

I grew up in an environment with similar imaginations. My mother was an artist and a forager who would often pull the car off the road to pick some wild berries that she would shove unwashed into our mouths, and my father, a boatman, tested our skills by leaving his five kids clamming on an island in the Great South Bay, with no sunblock, food, water, or tools, and a vague time for pickup. We’d come home sunburned, with matted hair, and he’d have a good laugh while my mom cleaned us up.

It wasn’t cruel, it was fun for us. We loved their creativity and spontaneity. One day we’d be in Catholic School, and the next morning we’d be sailing to the Bahamas, seven people on a sailboat meant to sleep four. My bunk was a bookshelf with a floatation cushion. We fished for our dinner, survived foul weather, and fought over stale cookies. Every one of us was nearly left back a grade in elementary school for unexcused absences.

Jump ahead to 2019. After a hard day’s work, I became hooked on a few streaming TV series: “The Leftovers,” “Wayward Pines,” “Under the Dome” — the first series brilliant, the second two terrible. But they all had one thing in common: An unknown catastrophic world event has happened and a group of unrelated people are forced to be together in a small town for eternity because the rest of the world is unsafe or inaccessible. Kind of like the 1990s hit TV series “Northern Exposure” if everything outside of Cicely, Alaska, was a zombie wasteland.

Or like the 1972 disaster film “The Poseidon Adventure” (with the all-star cast of Gene Hackman, Ernest Borgnine, Jack Albertson, Shelley Winters, and Red Buttons), in which people of disparate backgrounds are forced together to cooperatively figure out a way out of the hull of an overturned ship, or die. The cast typically includes a doctor, a former athlete, the sheriff, the businessman, the waitress, the priest — one of every type.

As I binged on “The Leftovers,” a masterpiece about a community trying to act normal after 2 percent of the global population disappeared from life mid-sentence, I wondered why we had a surge in the genre of small towns dealing with the aftermath of doomsday. There’s always a reason certain subjects come to the fore at different periods in history. The “Heimat” film (wholesome bucolic stories) was a soothing staple of post-World War II Germany as the country was grappling with a new toxic identity. Horror films about mad and dysfunctional families, like “The Texas Chainsaw Massacre” and “The Hills Have Eyes,” were box office hits during and immediately following the Vietnam War, when American ideals of the perfect nuclear family were dismantled as young soldiers returned home with physical and mental trauma.

I often say, artists see the future. Authors of speculative fiction have an especially advanced capacity for imagining tomorrow. In 1945, the writer Arthur C. Clarke predicted geostationary communications satellites 15 years ahead of NASA’s launch of Echo, the agency’s first experimental communications satellite project. In 1941, Isaac Asimov popularized the term “robotics” in his short story “Liar!” long before robots became part of the vernacular. Aldous Huxley foresaw cloning in “Brave New World,” 1932, decades before Dolly the sheep was made incarnate (again), and countless other authors and artists envisioned the future before it was written. More recently, in 2011, Steven Soderbergh directed the film “Contagion,” which imagined how a deadly virus could travel globally in a matter of weeks by, guess what? Touching your face.

Jump ahead to March 21, 2020: We are in the early stages of a very real global pandemic related to the spread of COVID-19 and being told to stop touching our faces, or anyone else, for that matter. I am quarantined in the small town of Sag Harbor, with a cast of characters that includes my two teenage daughters, Lola and Gigi, my husband, Carlos, and a handful of friends who I take “safe distance” beach walks with daily.

Suddenly, every parent is a homeschooler, and everyone is an artist. Joseph Beuys was right. We’re playing music, performing, dancing, writing stories, and making art. Creative expression is at an all-time high. Who could spare the time for this two weeks ago? Priorities back then that seemed critical, like getting to work on time and keeping the mortgage paid, have radically shifted. Could we live smaller? Work less? Spend more time together?

Observation, slowing down, and time in nature have become essential to maintaining sanity. With each passing day, my circle of associations gets smaller and smaller. I speak with two to three co-workers daily, my parents and my siblings make funny, insider humor check-ins, and I eat three square meals with my husband and kids. All other non-essential relationships have gone virtual.

Were my parents right to pluck us out of reality and challenge our imaginations? And to routinely tell us that everything we thought mattered, like graduating from elementary school, was an illusion? One thing is clear, artists, writers, and creative people have advanced skills for surviving unpredictability in the world. They may be most prepared for life during, and after, coronavirus.

Andrea Grover is the executive director of Guild Hall and a curator, artist, and writer.