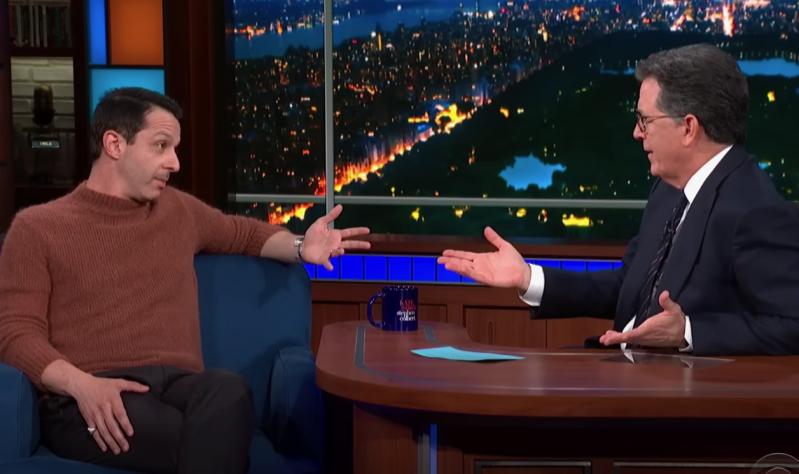 The actor Jeremy Strong on “The Late Show With Stephen Colbert” in October.
CBS via YouTube
By Baylis Greene

So I was watching Jeremy Strong on “The Late Show With Stephen Colbert.” On YouTube, this was, as I cut the cable cord long ago. And in the course of being interviewed about his latest role, in “Armageddon Time,” playing the father of the guy directing him, James Gray, Strong mentions James Salter, the late Bridgehamptoner, “one of my favorite authors.”

He was paraphrasing Michael Dirda’s line from a Washington Post review — “he can, when he wants, break your heart with a sentence” — and applying it to the acting of Anthony Hopkins, who’s also in “Armageddon Time.”

I knew I liked this guy. Starting with his flawless performance as Kendall, the addiction-compromised number-two son in “Succession,” growing as I read of his working-class Boston background (all right, all right, and then Yale, but we can’t hold that against him), and now more so after this October interview, which was rare for the extent to which it elevated the usual late-night fare. Strong had never done one before, on television anyway, and therefore didn’t know to leave his thoughtfulness and sincerity in the greenroom.

“A malignancy in the heart of late-stage capitalism” is how he described what “Succession” explores, roughly based as it is on Rupert Murdoch, his empire and his family.

He went so far as to bring up Emily Dickinson and her injunction to “tell all the truth but tell it slant,” in this case referring to Colbert’s political commentary dressed up as opening-monologue jokes.

But his Hopkins-Salter mashup called to mind another late Bridgehamptoner, James Lipton, who, on the one “Inside the Actors Studio” show I’ve seen, interviewed Hopkins. He was awkward, surprisingly, and essentially said his method of acting amounted to pretending real hard.

Jeremy Strong, on the other hand, is one of those actors who will stay in character between takes, on the set, all day, which he said was about concentration, not affectation, a focusing of his attention to better become a blank slate. You know, like Tom Cruise achieves without trying.

And whereas Lipton wrapped up each show with 10 questions (“What is your favorite curse word?” and so on), Colbert trotted out a much-abbreviated version of Proust’s questionnaire, one being “What is your idea of perfect happiness?”

For the record, Strong’s answer was sleeping in and having his daughters wake him up and bring him coffee.