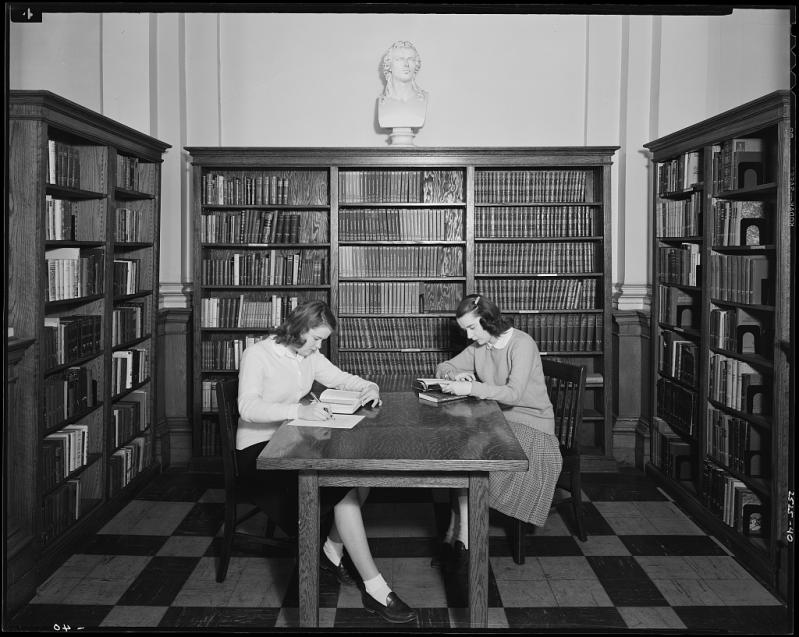 Hard at study at the Trinity College library in Washington, D.C., sometime in the first half of the 20th century.
Theodor Horydczak Collection, Library of Congress, Prints and Photographs Division
By Baylis Greene

I’ve come to the conclusion that I can’t do it. It’s too hard. Too complicated. Too fraught and at the same time consequential. And it’s not even my decision or my life.

I’m talking about a high school senior’s choice of college. I already feel apologetic about this, but after a never-gets-old ferry trip to the verdant Nutmeg State for a campus tour, I was flummoxed: So, what is an open curriculum, exactly, how would it work, and is it even wise?

Depends on the kid, is the inevitable answer. But then there’s the kid who’s blessed with equanimity enough to see the pluses of such a seat-of-the-pants education and at the same time those of its diametrical opposite, the dreaded core curriculum, occasionally demanded by some of the more traditionalist Big Boys and taking up a goodly portion of a student’s first two years. In fact, this particular kid in question can see himself doing both and is pursuing both possibilities. Structure can be necessary. Freedom can be beneficial.

“Now there are seven kinds of Coke / 500 kinds of cigarettes / this freedom of choice in the U.S.A. drives everybody crazy.”

That’s the rub, as posited by the great L.A. punk band X in “See How We Are,” a song that should be on every American’s playlist. God help you if you’re the type who actually mulls a decision over and tries to analyze it. The multiplicity will sink you.

Back to the core. The courses. Western civilization? “It’s an interesting argument,” I once heard a professor deadpan. No matter, at this point those classes have been relegated to the likes of Bob Jones U. Philosophy? Now you’re talking my language. Some core programs even dare to venture into faith and critical reasoning. Well, at least among the Jesuits.

But as I write this and reveal to myself my own preference, I also realize the “do as I say, not as I do” nature of it, as in my experience as a greenhorn, dropout, returning student, and finally transfer, I managed to avoid any and all requirements outside of whatever the hell I felt like studying, save a single precalculus class (satisfying, by the way, once you get acclimated).

What do I remember most fondly of those years? Bending an elbow at a bar with a professor. Laughing with his wife, the radical feminist medievalist, as I stumbled over reciting in Middle English from Chaucer’s prologue to “The Canterbury Tales.” The freewheeling lit-class discussions, as enlivening as a hit of pure oxygen.

It was a respite, an otherworldly lull, a safe space and time to explore. Whichever way you go, kid, enjoy it. I’ll try not to worry.