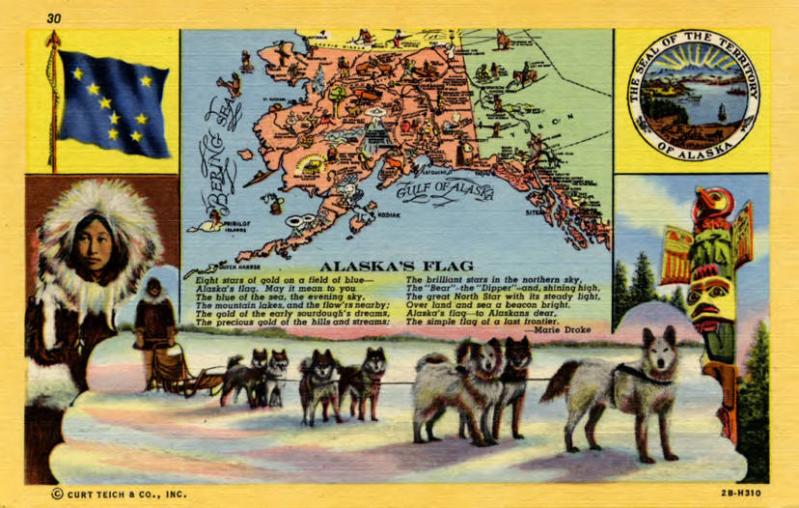 A postcard, complete with a poem in tribute, from 1942, when Alaska was still a territory.
Newberry Library, Chicago
By Baylis Greene

With the latest Supreme Court decrees everyone’s rightly exercised about, one could be forgiven a measure of confusion: states’ rights for abortion, states have no rights vis-a-vis gun control.

If you’re thinking a court now dominated by justices appointed by presidents who lost the popular vote is unjustly subverting the will of the people, those same justices may in fact believe they’re meting out the will of the founders, suspicious as those great men were of the rabble.

You know the hits: The franchise was bloody exclusive. State legislatures, not the people, elected senators. The whole ridiculous Rube Goldberg apparatus that is the Electoral College. A direct democracy? They begged to differ.

So I found myself thinking: Where is the popular will most manifestly expressed? It’s big, it’s cold, it’s distant, it’s got wilderness, it’s hard to get to, goods there are expensive, it’s dotted with military bases, it’s sparsely populated yet resource-rich. It’s thus very much like a colony. Alaska.

They were hip to pot legalization decades before Colorado. The thinking: As long as you don’t mess with me, do what you want, longhair. Abortion? It’ll stay legal; it’s about personal liberty. Remember Hunter Thompson in “Generation of Swine”? “You body-Nazis have had your way long enough,” he says as he puts his cigarette out on someone’s neck. It’s like that.

It may be more American, in the old frontier sense, than anywhere else, but it’s not perfect. I lived there. One time I was eating lunch at a diner and lowered my Elmore Leonard novel long enough to eavesdrop on the next table over. A guy was saying how Fairbanks was a great place to be a Black person. People left you alone. No one cared. But then he concluded his thoughts by pointing out that all the racism was reserved for the native populations.