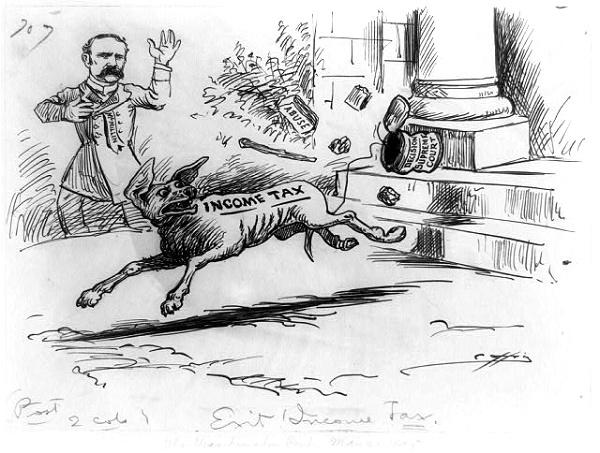 An 1895 cartoon by George Yost Coffin shows Benton McMillin, a proponent of the federal income tax, looking on as the Supreme Court declares it unconstitutional. (Eighteen years later, it went into effect.)
Library of Congress
By Baylis Greene

I should be triumphant, or at least relieved, having just now electronically filed our taxes with exactly three minutes to go before Monday’s witching-hour deadline. But I’ve never been more miserable. Or soaked.

Still, the bang-bang play of Easter and Tax Day this year has me appreciating anew that mid-1990s Art Spiegelman New Yorker cover showing a crucified bunny in the suitcoat, tie, and spectacles of the office worker or accountant, his pocket linings turned inside out from the fleecing by Uncle Sam, all against a backdrop of a 1040A. Surpassed in controversy only by Barry Blitt’s sly rendering of the Obamas fist-bumping in the Oval Office in militant Arab garb post-election. (And as that day recedes, isn’t it increasingly hard to believe it ever happened?)

This year the fun was bled right out of TurboTax, which used to seem like a game — plug in some numbers, import info from last year, see what’s changed. Like magic. But the techie taskmaster, its cruelty dressed up with cute conversational nudges (“Okay, that took longer than I thought”), now puts me in mind of Jack Nicholson in “Chinatown,” in a scene that would never be shot today, slapping Faye Dunaway, who insists, “She’s my daughter,” then “She’s my sister,” with each succeeding blow. With the digital world: “It’s wonderful!” Slap. “It’s horrible!” Slap. “It’s wonderful!” Slap. “It’s horrible!”

The bill’s so big it makes me question the software’s faculties. Of course, I have only to blame the so-called SALT deduction cap of the 2017 tax reform, which so effectively, puzzlingly, brought the hammer down on middle-class payers of state and local taxes. And, mercy! To what end? Oh yes, the transfer of more wealth upward in the form of cuts to corporate, investment, and estate taxes.

As I write this, wouldn’t you know it, I see that earlier in the day a lawsuit to give states sovereignty over the cap was knocked back whence it came by the Supreme Court, a body that more and more appears to need disbanding.

“New York officials estimated that the cap would cause the state’s taxpayers to pay $121 billion in added federal taxes from 2018 through 2025,” The Times relayed. Even rivals like Kathy Hochul and Tom Suozzi were brought together in opposition.