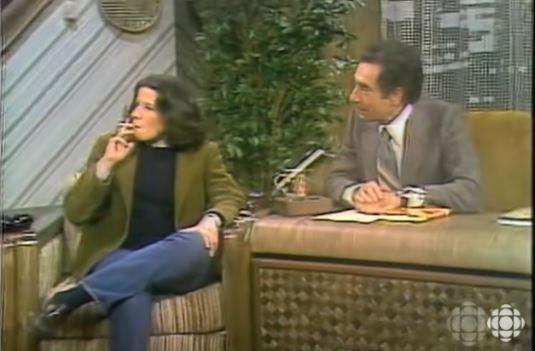 A screen shot of Fran Lebowitz on a Canadian Broadcasting Corporation talk show in 1978.
CBC Archives
By Baylis Greene

If you’re a news junkie of the public radio variety, or even a nightly TV news addict of the PBS stripe, by now you may be hanging by a very thin thread. Because nearly every guest, interviewee, expert, giver of testimonials, voice from the rubble of Kharkiv, whoosy or whatsit has taken to signing off with a trotted-out “Thank you for having me.” Almost without fail. And once you’ve heard it, you can’t stop noticing it. It’s just about become a laugh line.

We’re that much of a parroting species? It reminds me of the Clinton administration, when from the White House came word of a “sea change” in policy. Whether “don’t ask, don’t tell,” Nafta, the crime bill, the repeal of the Glass-Steagall Act, or any of the others in the laundry list that no longer seem such great ideas, who knows, but, sure enough, that phrase cascaded down through the national to the local media and out laterally to the suites of corporate America. Until one day at last the waters were mercifully stilled.

“Thank you for having me.” Uh-huh. Now return the teacup to its saucer, brush the biscotti crumbs off your shirtfront, and get the hell out.

That is to say, it’s grating in part because the line is inevitably uttered in response to “Thank you for sharing your perspective.” (Which itself is an overused word, and undercutting, too, as in, “That really was just one compromised person’s take.”) Or, more often, “Thank you for being here.” Or simply “Thank you.”

Can stabs at a little variety be made? How about “You’re welcome.”

Fran Lebowitz may be a paragon for exactly no one, but the old grump and misanthrope, the original famous-for-nothing celebrity — a 1970s holdover from more leisurely days of fashionable boots, free time, family vacations for working people, and clouds of cigarette smoke over Johnny Carson’s desk as his guests appeared to have nothing better to do than scoot down the sofa, linger, and listen to the next to emerge from the parted drapery — is and always was good about answering with a pointed “You’re welcome.” Which you’d expect from such a precise, terminally annoyed person.

As I say, that can be taken with a grain of salt. Maybe “You’re welcome” too strongly emphasizes the gratitude owed by the interlocutor. Personally, I prefer a response I picked up years ago watching Tom Colicchio on “Top Chef.” He always seemed a shy person thrust into the spotlight, and for that reason his quick, one-word “Pleasure” as he shook the hand of a jettisoned, near-to-tears contestant was just right, if not always entirely accurate.

Now all I need is a chance to use it.

Mashashimuet Park's History and Future
A Conference for Young People to Create Solutions
Get Outside, Get Moving
END_OF_DOCUMENT_TOKEN_TO_BE_REPLACED