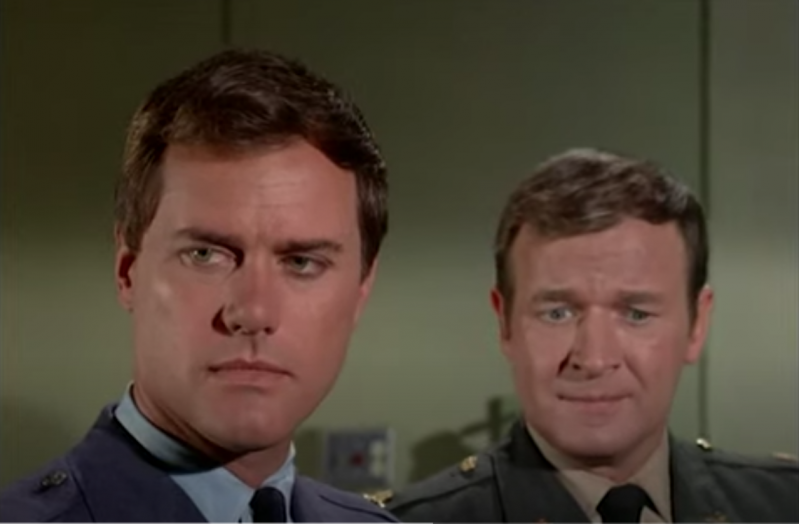 Larry Hagman and Bill Daily in a 1968 episode of “I Dream of Jeannie.”
NBC via YouTube
By Baylis Greene

The streaming-service binge is not exactly conducive to mental health, by design, although of course I've indulged. Season one of Netflix's "Daredevil," the hero of Hell's Kitchen, was my first experience with such addiction upon its all-at-once release in 2015.

That show was more sophisticated than it sounds, progressively fleshed out as it found its footing, and full of fresh takes — a sympathetic crime ring boss, Catholicism made cool, not creepy, thanks in part to a straight-talking, pool-playing priest. To say nothing of the novelty of a blind urban crusader in blood-red leather and gratuitous hand-to-hand violence, streaming-style, meaning just because they can.

And so over Thanksgiving break, when my 14-year-old daughter got hooked on "Wednesday," another Netflix series, this one brand-new, I was halfway prepared, if naturally helpless to do anything about it as she watched in her bedroom on her iPhone. But past my suspicion, I saw that she got something out of it, made some connections, applied some analysis, while the subject matter — the Addams Family — transported me back to my ill-spent kid years in front of 1960s reruns and their incredible character actors, like the wild-eyed John Astin as Gomez Addams.

I'm still trying to figure out, for one, how Larry Hagman — a couple of decades before he went nuts as J.R. Ewing in "Dallas," helpless to snap out of the character when off set — could be so mesmerizingly twitchy and put-upon as Major Nelson in "I Dream of Jeannie," or how Bill Daily could communicate such unending nervousness as Major Healey, his best buddy. Naturals, I guess you'd call them.

What a weird golden age of outlandishly talented actors punching below their weight in the name of small-screen silliness. These days, despite what seems like society's continued disintegration, we have any number of new and different golden ages, from children's picture books to young-adult novels to scripted television for streaming services, even as the demand for "content" clearly outpaces quality.

But enough of that. It's late and I need to sneak in another episode of "The White Lotus."