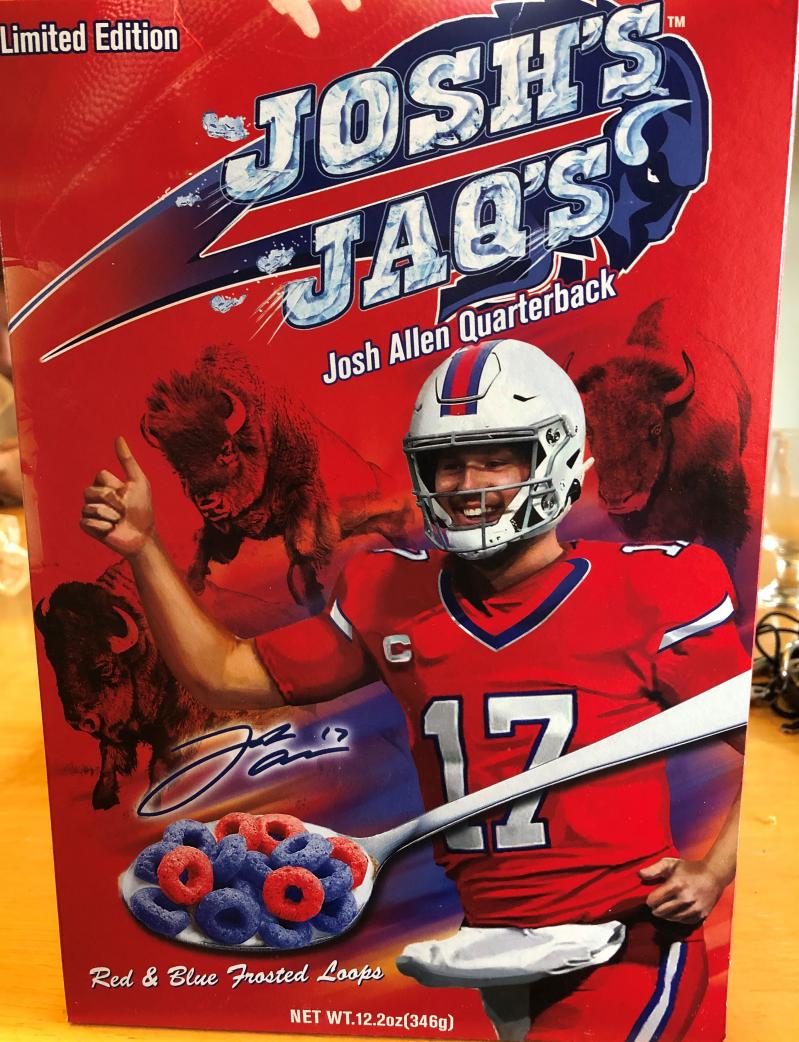 Sales of Josh’s Jaq’s cereal, a Froot Loops knockoff in the vibrant though not very food-like red and blue of the Bills, go toward the John R. Oishei Children’s Hospital in Buffalo.
Baylis Greene
By Baylis Greene

In “Silver Linings Playbook,” what was it Anupam Kher, as the shrink, turns and says in his Indian accent to Bradley Cooper as Pat, his jersey-wearing friend, patient, and fellow Eagles fan? Oh yes: “DeSean Jackson is the man.”

Saturday night, Josh Allen was the man, 6-foot-5 and 237 pounds of scrambling, TD-throwing showtime as the Buffalo Bills gleefully rolled over the New England Patriots, long past any Tom Brady late-game heroics but still under the watchful scowl of Bill Belichick, hooded like a “Lord of the Rings” troll against the 5-below wind chill on one of the coldest nights in N.F.L. playoff history.

I was in situ, as they say, rooting with my returning-to-campus daughter from a room in a Geneseo bed-and-breakfast as the Bills whipped their fans into a frenzy in Orchard Park, about an hour away down Route 20A.

They’ve earned it, not just for their bundled-up loyalty and hot toddy-sipping good humor, but for those acts like the one about a year ago when their team beat the Baltimore Ravens and knocked Lamar Jackson out of the game with a concussion, but then Bills fans felt bad about it and wound up donating more than half a million dollars to the star QB’s favorite charity, Blessings in a Backpack, which feeds kids in poverty.

“Billieve,” it says on flags, posters, T-shirts, bumper stickers, and social media across Bills Country. And that territory is vast, which I’ve come to appreciate in nine college-related drives upstate, but while the kid’s presence up there has deepened my fandom, it goes back to the realization, gradually dawned over the decades and repeated by yours truly with grating frequency lately, that the Bills are indeed “New York State’s only professional football team.”

And now comes satisfying word of this nut from Greenwich Village, sick and tired of the “nightmare” trip to New Jersey to see the Jets and Giants, suing both erroneously branded New York teams for several billion punitive dollars.

“Mental and emotional damage,” sports fans? I can see it.