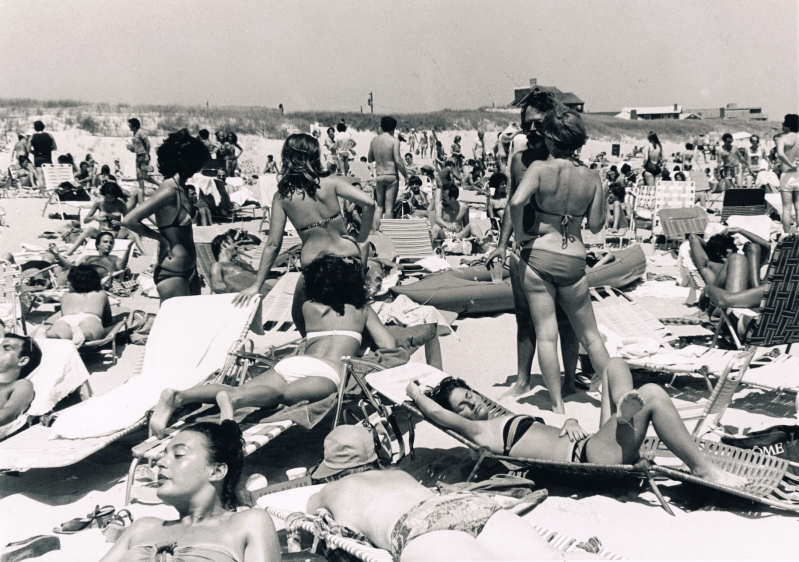 A photograph from the archives of The East Hampton Star captures the scene on Asparagus Beach (a.k.a., Atlantic Avenue or Coast Guard Beach) on July 10, 1977.
By Bess Rattray

My dog, Sweetpea, is the only mutt in the world who cannot find a Milk-Bone tossed in her direction, even if it’s tossed directly at her own front paws. I don’t know if her nose is defective or if the scent of treat is so exciting that her brain goes haywire, but try as she might, running in circles to find her savory morsel, she always fails: The spinning and wagging slow to a sad stop and she looks up at me with self-pitying eyes. The Milk-Bone lies there in the grass approximately eight inches from her maw.

Her bacon sensors are, however, infallible. She will rouse herself from a snoozing state high atop her regal cushion near the living-room windows and come trotting into the kitchen post-haste the minute I pull a packet of breakfast bacon from the fridge. Even if it’s turkey bacon.

It was apropos of this less-than-profound insight about a dog and a Milk-Bone that my thoughts turned to campfires this morning. Why do all creatures great and small love bacon and its aroma? It must be because our ancestors spent millenniums roasting flesh over fire — a human reliance on smoky meat for sustenance going back so deep into prehistory that our very DNA has coded us to crave it. Us, and our canine companions, who leaned in beside us around the fire glow. Dogs have been stealing the soft spot on the bed, dodging for scraps from our dinner, and getting underfoot for at least 14,000 years. If dogs could create cheesy internet memes, most of them would be about bacon; as suburban moms wear T-shirts emblazoned with joke slogans about chardonnay (“Wine gets better with age! I get better with wine!”), Sweetpea would sport doggie apparel referencing Boar’s Head Extra Thick Cut (“ ‘That’s too much bacon’ — said no one ever.’ ”)

If I think about it, I’m at my happiest around a bonfire, on the beach. My friend Carl Douglas, in Sweden, told me once that he believes human civilization began at water’s edge, as tribes gathered together to drink and bathe. I’d take that thought one step further and say I believe human civilization began at water’s edge around a bonfire. Shoulder-to-shoulder against the dark, sharing roast meat, gossiping, singing, playing bone flutes, meeting sexy singles.

The beach bonfire is, of course, where homo sapiens Hamptons-icanus, in youth, experience many of their firsts: first beer, first kiss, first naked night swim. As a teenager I attended more than my share of fires at Indian Wells, saw many a watery dawn break in the east. My daughter is 14 and has not yet, as far as I know, been out after nightfall at a beach bonfire, but I expect this will happen before summer’s end. As her mother and a bonfire enthusiast myself, I’m of two minds about this. No creeping into the dunes, dear! No vaping! No hard alcohol! Definitely no disrobing!

We spent many more hours around firelight, in the summers of my youth, than anyone seems to these days. (I realize I’m a hard-core bore on this subject, but we have instead huddled each night around the ever-shrinking glow of an electronic screen: television giving way to iPad, iPad giving way to iPhone. . . . Soon we will find ourselves alone in bed, staring into a tiny streaming device held in our palm like a sleeper who has awakened to inspect a flea.)

The bonfire on our beach at Gardiner’s Bay each Fourth of July in the 1970s and 1980s was so huge that it lasted five or six hours, flames licking the sky, higher than the top of the dune, higher than the peak of the Sunfish mast. It’s hard to believe this ever seemed like a good idea, but we used to light dozens of tea candles and place them carefully inside in clear plastic cups, and set them out on the water in a flotilla of flickering flames that traveled on wind and tide across the bay to Cartwright Shoal. I am shocking myself as I recall that as recently as the 1990s we intentionally put plastic into the sea, but it was beautiful.

A couple of weeks ago, while standing outside Carissa’s Bakery on Pantigo Road, waiting for my egg-and-posole breakfast taco and shuffling my flip-flops impatiently, I fell into conversation with a chipper young woman who was waiting behind me for a large order of lattes, whitefish toasts, and pastries. She wore a polo embroidered with the name of her employer, a service business that runs errands for the wealthy, toting purchases hither and thither so clients don’t have to go inside Citarella or wait on a breakfast taco line. Curious, I asked her what other sorts of errands her company runs. “We set up a lot of beach chairs and beach umbrellas,” she said. “We set up a lot of beach bonfires.”

“We will bring the metal container to the beach for you, and logs, and get the fire burning,” she continued. “We provide blankets. Marshmallows, if you like. . . . ”

Whoever came up with this scheme of doing the heavy lifting for beachgoers is clever, indeed, and I hope they prosper, but I am not at all sure I’d avail myself of the convenience, if I could afford it. There’s something sterile about store-bought logs when you can gather driftwood for free. I cannot imagine that the customers who pay a premium for their bonfire are motivated to invite strangers and stragglers into the glow. Nowadays — nowanights? — you might see a dozen small fires burning on the average Friday at Asparagus Beach, but it wasn’t always so. Once upon a time we were alone. And tribally affronted if anyone encroached on our sandy turf after sunset.

I think of a night in approximately 1988 when a pair of warring campfires sent sparks into the sky above Indian Wells. It was Us, a group of bohemian slacker-locals wearing colorful vintage rags, versus Them, a group of cleaner-cut college kids from the City. We — and by “we,” I mean me — thought it would be hilarious to commando-crawl in their direction under cover of darkness, up by the beach grass line, and hold a cigarette lighter to the fuses of a series of bottle rockets, sending chrysanthemum explosions, bang!, bang!, bang! out over the waves that broke white in the moonlight.

This is not behavior I’d encourage my daughter to engage in. (No shooting fireworks near strangers!) But the tribal pull was strong. One of their number — in my memory wearing tennis whites, though as I type this I realize my imagination has probably provided that corny embellishment — stood and strode manfully in silhouette over to our side to tell us we were “scaring the girls.” The funniest thing I’d ever heard! This is not a story about mature behavior, and I am not proud, but we did end up sharing a Rolling Rock with the city kids and I bet they remember that night, too.