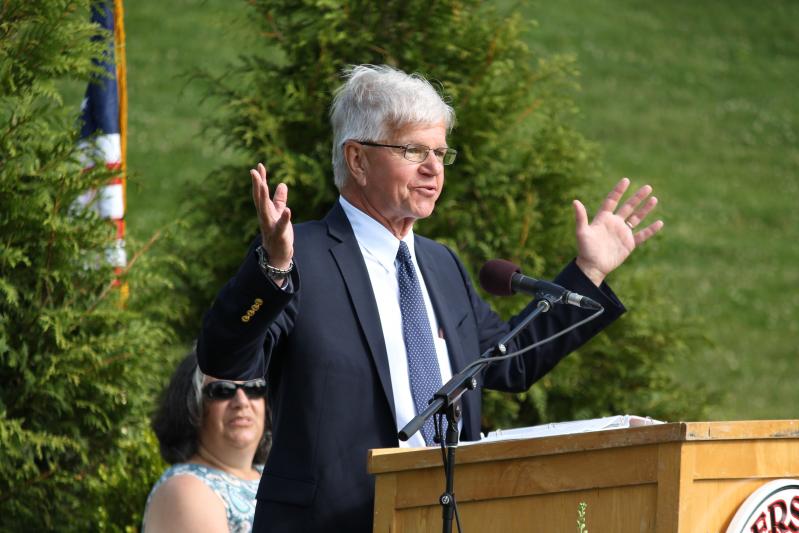 If the world’s such a mess, how is it that the clock atop ol’ Pierson High keeps accurate time?

Its bright face smiled down upon a successful graduation ceremony Saturday. The sun shone, masks were left behind in car cupholders, a drone buzzed overhead like an oversized insect on a mission of benediction, onlookers took to the shade ringing Pierson Hill, almost as if in expectation of an en plein air production of “A Midsummer Night’s Dream,” and the national anthem rang out in winning three-part student harmony.

Everyone, in other words, had a good time. Especially Fred Thiele.

About that headline above, okay, maybe not the presidency. The U.S. Senate? Delivering our upstanding assemblyman unto the wastes of the House of Representatives, where newcomers are immediately assigned to the phone banks to beg for campaign money, and never stop begging, is a purgatory he simply doesn’t deserve.

Not that the guy doesn’t seem content where he is, judging from his relaxed, funny, at times touching commencement address. It didn’t stint on the self-deprecation, either: He’s well aware that his walks on the Long Beach shoulder are almost as much a feature of that stretch as the ospreys.

In his speech he invoked the colossus of Sag Harbor philanthropy, Margaret Olivia Slocum Sage, making a point to use her name, rather than her husband’s, the traditional Mrs. Russell Sage. She was the richest woman in the country when she died, and Thiele was right — what other village has been so shaped by the gifts of a single person, from the high school, which has the all-American look of Riverdale High from Archie Comics, to the handsomely bricked library to the proportionately vast Mashashimuet Park?

He brought up Sage for her “to whom much is given, much is required” spirit, meaning to apply it to the new arrivals engaging in bidding wars to buy their way in as much as to students on their way out. He was addressing the now- more-than-ever concerns about keeping the fabric of society together, about how in the world fire departments and schools will be able to function in such a “special place” that becomes maybe too special.

It was hard, and pointless, to be cynical, given the setting and the source. Thiele, the Pierson alum, mentioned his son, too, also a grad — in 2004, when, new to this paper, I had the occasion to interview him, as he was first or second in his class. And distinctly uninterested in politics, I might add.

Thiele’s roots here may be deep, but he neglected to go into his forebears’ involvement in rumrunning, which he might consider for future campaigns, as what is that activity but the ultimate expression of Yankee independence and free enterprise?