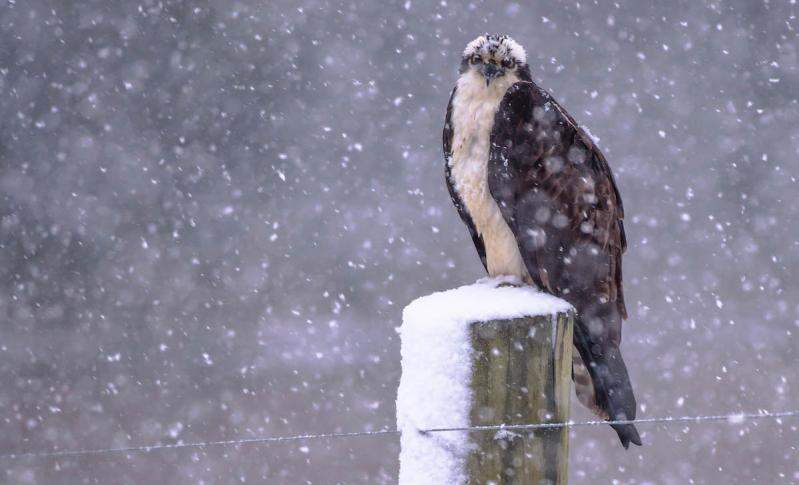 Spring brings the return of the osprey, but the osprey does not always bring the spring weather, as evidenced in this April 2018 photo.
Max Philip Dobler
By David E. Rattray

There are better ways to keep records than writing in pencil on an exposed two-by-four in the basement, yet it works. For almost 20 years I have been noting the date when the first spring peepers sing out from the swamps alongside Cranberry Hole Road. And, for almost as long, I have marked the arrival dates of the earliest osprey.

It is a curiosity to me that both the peepers, which are quarter-size frogs, and the fish hawks, as we knew them growing up in the 1960s and 1970s, appear at almost always the same time. For the frogs, doing so is easy enough, since they spend the winter in the mud and leaves, and, when the temperature rises just enough, so, too, does their libido, and the singing ensues.

Osprey have what seems to me more of a challenge, in that they must begin to fly north at just the right time to arrive in the air above Long Island around the third week of March. Since the fish hawks move around a lot, I am never as sure of their actual arrival date. Some years, as it gets to be April and I have not written anything on the wood in the basement, I let it go, figuring that they have been here for at least a week and any date I put down would not be accurate.

It is not that way at all with the peepers. Driving home from work at dusk, I can hear them carrying on among the reeds from inside the car. Letting the dogs out after their dinner, I can stand and look at the stars and listen to their collective ringing. As summer comes, nights in the swamps settle down, and dark seems to me oddly quiet.

Spring is an interesting time in the duneland east of Bendigo Road. Hawks of all sorts hunt here on their way farther north to the nesting grounds. The wild turkeys seem to keep to the woods more than at other times of the year, supposing that death from above awaits those who stray into the open.

Like the osprey that must leave the southern grounds in time for the alewife runs in the bay, the winter birds, blue jays and cardinals, most prominently, are gone already on their own timetables.