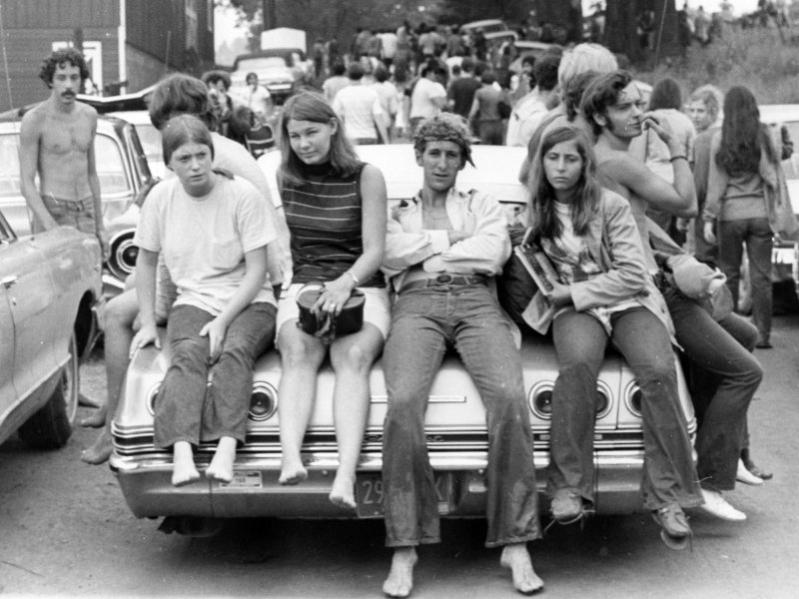 Waiting in a line of cars to get to Woodstock. August 18, 1969. Wiki Commons / Ric Manning
By Bess Rattray

I’ve never understood why patience is a virtue. Patience makes life easier, sure (especially if you are a parent). But a virtue? Why? Swift efficiency is more my speed. In life B.C. — before Covid-19 — if I spied a line of citizens forming, whether it was to get their thirsty hands on an iced chai or for admission to Ringling Brothers & Barnum and Bailey Circus, I would turn smartly on my heel and head in the other direction at a brisk clip. Always a brisk clip.

Who anticipated that our generation’s national catastrophe would involve so much standing around?

We’re forever waiting on lines. Lines at the post office, with your woolly turtleneck pulled up over your face mask for extra protection, casting beady glances as the other postal customers standing stock-still in the airless space. Lines for early voting at Windmill Village in a torrential November rain, everyone excited and smiling: “After you! No, after you!” Lines outside of One Stop on Springs-Fireplace Road in late spring, customers staggered at a safe distance around the parking spaces, watching the glass doors intently, as if Elvis himself might step out. Polite lines at Amber Waves Farm in Amagansett, with French visitors in prairie frocks swinging pretty little market baskets. Listening to melancholy 1970s AM-radio hits on WLNG — “There’s Got to Be a Morning After,” and “Time in a Bottle” by Jim Croce — while stuck on the conga line of cars trying to get into the town recycling center three days after Christmas. Driving at a crawl down Main Street in July and scoffing at the people waiting on line outside of the J. Crew boutique. Little niceties at the best-regulated lines: hand sanitizer and “stand here” floor signage at Grindstone Donuts in Sag Harbor.

Americans were reluctant to get on board in early 2020 with the concept of wearing masks, I think, because it seemed un-American — mask wearing was something done in Asia — and queuing up seemed un-American, then, too. What is this, Communist Russia? Is there going to be a riot over black pumpernickel? I’m sure if someone were to do a global study of line-waiters’ patience during the coronavirus pandemic, champions would emerge (the British, who made civil queuing a point of patriotic pride during the Blitz?), as would losers (New Yorkers, who tell time by their own hurried standard, the New York minute?).

If what I read on the Peloton Moms Facebook page is correct, in many suburbanized parts of our nation, Americans haven’t had to stand in line at all, during all of this, because they have access to shopping services like Instacart: You order your Nespresso pods and jumbo-size cartons of individually packaged Chex Mix, and a gig worker picks it all up at Costco and delivers it a few hours later, as you stand in your front doorway tapping the face of your Apple Watch. Although I’m embarrassingly impatient by nature, Instacart seems all wrong to me. Consumption hardly needs to be sped up, does it? Instacart is the express bus to climate apocalypse. All aboard!

The most memorable queue of 2020 may have been the one I stood on just before New Year’s to get my first shot of the Moderna vaccine. First, I accidentally got on the wrong line, over at the Southampton Hospital annex building on Meeting House Lane; I stood for a while among a stream of heavily-bundled-up and bummed-out-looking strangers waiting to get tested for Covid-19 before I realized my mistake and found my much more cheerful line of fellow E.M.T.s joshing and chatting at the back of the building. I’ll admit I am feeling a bit guilty about getting my vaccine before most people, but I took my shot, anyway.

Of course, not having to wait on line is, has always been, a measure of privilege. People on public assistance, immigrants, anyone at the bottom of any societal heap, are forced to set aside their dignity and wait on all sorts of interminable and often humiliating lines. (When I was adopting my daughter and we landed at J.F.K. Airport in 2008, I had the unforgettable experience of being herded into a pen among a hundred or so other visa-holding immigrants, like her, my babe in arms, and it dawned on me only slowly that some of these fellow travelers had been sitting on the cold linoleum, under the airport holding pen’s fluorescent lights, for two or three days.) Coronavirus has to at least a small degree democratized the waiting. Though — not counting the queue of late-model black Mercedes-Benz S.U.V.s that idled behind Carissa’s Bakery on Pantigo Road this summer, for pickup of $500 boxes of fancy Italian food — the real 1 percent have surely found ways to outsource the waiting.

On New Year’s Day, I gave my aggrieved and indignant children a pep talk that they really didn’t want to hear, all about how we need to be patient right now, now more than ever, to be strong, to not flag, to push through — to bravely accept these last few weeks (months?) without sleepovers and ice-skating parties — because we cannot give up now, now that the end is almost certainly, possibly, we hope, inching into sight. We’re all tired of the living room.

I’m tired of the living room. I’m tired of my boring bedroom. I just want to go to the movies.

That is my dream for 2021: I am going to the movies. I want to talk too loudly during the previews, get shushed by some film-going pill in front of me, eat too much popcorn with the fake butter. I’d like it to be a comedy, and the auditorium to be crowded, so we can engage in some contagious laughing. Laughing of the sort where you are howling it out, hacking it out, hoarsely laughing to the bottom of your breath. After that, I’d like to gather for some group singing. I don’t want to wait all the way until Christmastime 2021, so it won’t be carols — not the “Hallelujah” chorus — but maybe we can fill up the John Drew Theater in June or . . . okay, maybe September . . . and get someone to lead us at the piano onstage so we can all sing along, feel-good music, like they did back in the war. I’m ready for “Purple Rain,” and “Born to Run,” and a few off-key but lusty rounds of Gloria Gaynor’s “I Will Survive.”