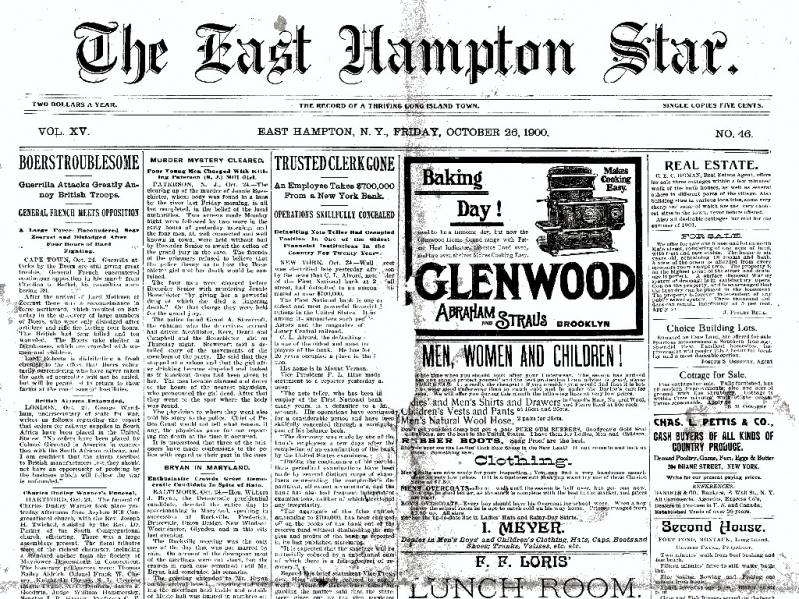 One hundred thirty-six years ago this past Sunday, the first-ever issue of The East Hampton Star came off a hand-cranked printing press in a rented barn at the north end of town. There were just 500 copies in the initial run, and for the masthead, the publisher, George Burling, chose a gothic font that read, “The Easthampton Star.” Seeing the name of the town as one word has raised the question of when East Hampton became two words and if it ever properly was just one.

Early documents have it as “Easthampton” but whether the one word was a penman’s preference or reflected general usage is no longer obvious. Even the colonial authorities differed on the matter; the 1658 agreement by which East Hampton became part of the Connecticut colony had the name as two words. But then again, once the town became part of the New York colony with a whole new set of royal governors and functionaries, it was Easthampton again.

When Gov. Thomas Dongan of New York signed an agreement assuring self-government and rights to the people of Easthampton in 1686, it was one word. But then, in 1699, it was East Hampton, and so on and so on.

The word Hampton itself is about as generic a place name as one could concoct, coming supposedly from the old English ham, or enclosed place, and tun, which meant the same thing. Here on Long Island, Southampton came first, so if we were to look for the derivation of the name locally, there is where we would start.

H.P. Hedges of an old family here was the self-styled historical authority of the middle-19th century and favored the hyphenated East-Hampton. Evenhanded, his 1849 address on the occasion of the 200th anniversary of colonial East Hampton also included notes on the history of Bridge-Hampton.

Burling rather quickly sold his East Hampton paper to Edward Boughton, who kept the old, gothic masthead until 1905, when he replaced it with one he carved himself. It is the same one we use today, with the word “East Hampton” curving over a six-pointed star and his new logo for it, “Shines for All.”