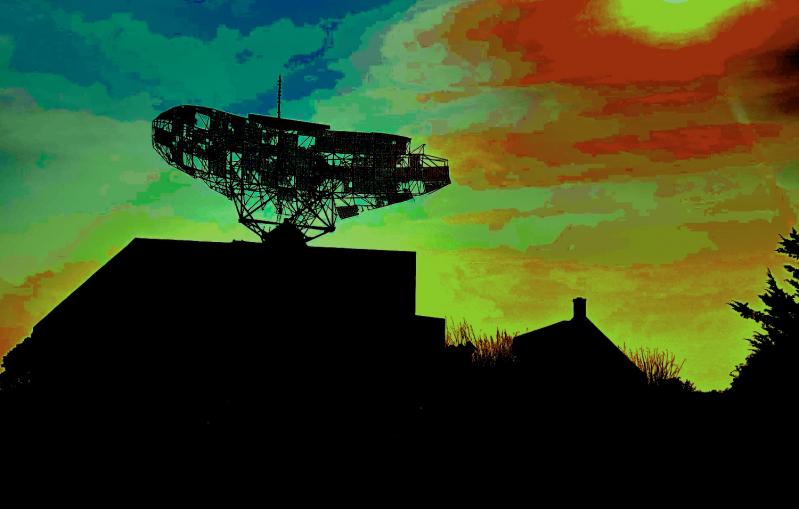 My daughter, at 14, is in the horror-movie stage of adolescence. She’s always disappearing into the gloom of the East Hampton Cinema, accompanied by 15 or 20 of her closest hoodie-wearing teenage friends, to see “Halloween Kills” or “Candyman.” They scream and throw things and annoy the hell out of the theater manager.

Given her taste in gore and ghosts, I wasn’t surprised when Nettie advised that she had to write a report in English language arts and that her subject of choice was Camp Hero and the dark doings said to have unfolded there. She’s seen “Stranger Things” and heard tell of the Montauk Project.

We were loading the dishwasher after supper when Nettie reminded me that I’d agreed to be interviewed, for this school research paper, about a supernatural experience I’d had at Camp Hero when I was young. She pulled out her laptop, plunked down at the kitchen table, and took note of every word I said.

Would you like to hear my ghost story, too? Read on.

I myself don’t believe in specters. I don’t believe there is a sinister portal near the old radar tower at Camp Hero. I don’t believe that the government experimented in time-travel there. (I mean, to be clear, I do not believe that the government could have experimented successfully with time travel, though, given their documented efforts to kill goats with telekinesis, I wouldn’t put it past the C.I.A. to have tried!) But nevertheless, as I told Nettie, as she typed, what I am putting on record here is abso-freakin’-lutely the God’s honest truth. I wasn’t the only witness, either. If you want to fact-check me, call my ex-boyfriend Will Wendt of Great Barrington, Mass. He saw the phantom, too, and could confirm.

Repeat: This is a true story.

It was the summer of 1991. Do you remember Little Rock Rodeo, the Tex-Mex grill on the highway near Red Horse, in the way-back when mesquite and fajitas were in fashion? Will Wendt lived in a small cottage behind Little Rock Rodeo with his guitar-playing, songwriting roommate, Gian Carlo Feleppa. It was in Gian and Will’s bachelor cottage that I first heard “Suzanne” by Leonard Cohen (“she feeds you tea and oranges that come all the way from China . . .”). We smoked Marlboro reds and put Public Enemy on the stereo and jumped up and down on the bed like children while listening to Cream’s “White Room.” In those days, it was common to go out to Montauk Point to trespass around the old Air Force base. We were in our early 20s but we still called one another kids. Will was a boy; Bess was a girl.

This was before Camp Hero was turned into a state park, before the trails there were marked with blazes. We would turn off after Deep Hollow Ranch, driving slowly east in Will’s truck until the road became crowded with beach plums and brambles. After dark, you had to know exactly where you were going to make it through the overgrown paths to the radar tower or the massive underground bunkers with the gun turrets — you know, the bunkers, like hills, that you climb down into on a ladder that disappears into the dark?

Everyone in town had heard the rumors about Camp Hero. Someone I knew at The Star claimed to have found quantities of spilled blood, possibly human, on the rotting carpet in the abandoned officers’ quarters. I never believed any of it, but it was fun to pretend. It was fun to go spelunking, semi-illegally, at night.

On the night in question, Will and I sat on the ground under the moon, near the edge of the cliff, with the surf crashing onto the rocks below. Gian and another friend, a girl named Gina, had frolicked off into the dark to explore, leaving us alone with a bottle of wine and a corkscrew.

If you had asked me a few years ago, I would have been able to point to the spot where this happened, but as I write I realize I have forgotten if we were sitting where the main parking lot now is, or if we were a bit farther west from the Lighthouse, down the slope and along the crumbling road to the clearing where signs warn visitors to keep away from the edge of the cliff, but we were only maybe 15 feet from it.

We were just talking. It was late. And then we heard a clinking-clanking sound. We turned toward the clinking and clanking and watched as the head and then the shoulders of a man rose smoothly up over the cliff edge. He just rose up until we could see his whole body.

He was standing in the moonlight and was unnaturally tall. He looked as tall as 7 or 8 feet. His head was unnaturally small for his body, and he was carrying chains. Heavy chains that went chank-chank as he began to walk straight toward us, holding a lantern to light the way.

We weren’t drunk. Will grabbed the corkscrew and held it in his fist to defend us. The man — or ghost? or Beast? — walked straight at us, eyes focused on something beyond us in the dark. We were huddled together on the ground. Carrying his heavy burden, he passed within three feet, never acknowledging our presence, and disappeared into the darkness.

Did . . . that look quite human? He was too tall. And did you see his head? It was too small. (You noticed his head was too small, too?) And even if it was just some super-weird-looking, abnormally tall fisherman — or a hobo? a hobo living in the abandoned Air Force base? — how had he risen up over the edge like that? Could a human scale the sandy cliff? And why with chains?

Will said the man — or ghost? or Beast? — had been levitating, floating, his feet not touching the ground, but I hadn’t seen that. I couldn’t say.

We would remain scared for weeks.

About 18 years later I was living near the Flatiron Building in Manhattan and was vaguely maybe-pursuing another guy, this one named Ross. Ross and I were out at dinner in Chinatown one Saturday, eating these fantastically delicious clams in black-bean sauce, rain pelting down on the Bowery outside the plate glass, when he paused quizzically, as if pondering if he should say what he was about to say. “Did I ever tell you,” he asked, “about what we saw at Montauk Point one time?”

Ross was from the north of England but had lived in New York City for many years. Pulling clams from the shell, he started to tell me a ghost story. It happened one time, he said, when he and a bunch of East Village friends who frequented Mona’s bar on Avenue B decided to drive out to the Lighthouse to watch the sun come up. They were sitting on the beach at Turtle Cove, waiting for the dawn to break in the east, when they saw a bizarre apparition.

“There was this man, or ghost, or I don’t know what, who was like 8 or 9 feet tall hovering along the edge of the cliff,” Ross told me, pausing to let the impact of his claim sink in. The man, or whatever, was carrying a boat hook and a lantern, and he was moving really fast. At first, Ross said, it had looked like the man, or whatever, was riding a motorcycle: The light he was carrying was zooming along the face of the cliff. But then they realized there was no motorcycle. The man — the Thing — wasn’t on the ground at all. He was in the air, at the front of the cliff. He was hovering or levitating and carried a lantern.

“Was his head really small in comparison with his body?” I asked.

Ross got angry. Like, he was steamed. Yes, the man’s head — the Something’s head — was weirdly small, and, yes, he was impossibly tall, but Ross assumed someone had already told me this ghost story, and that I was playing a trick on him. He thought I was pranking him. It took me a really long time to convince Ross I’d seen it, too. I don’t think I ever did convince Ross. He never really became my boyfriend.

Ross pops up infrequently on my Facebook feed, talking about organic wine. He’s living in Switzerland, or maybe it’s Italy, with a wife and a child. He was a cool guy. I think he’s a sommelier now, or a wine importer. But I haven’t seen hide nor hair of Will Wendt in 15 years or more. If you reach out to him to verify this story, please ask him to call.