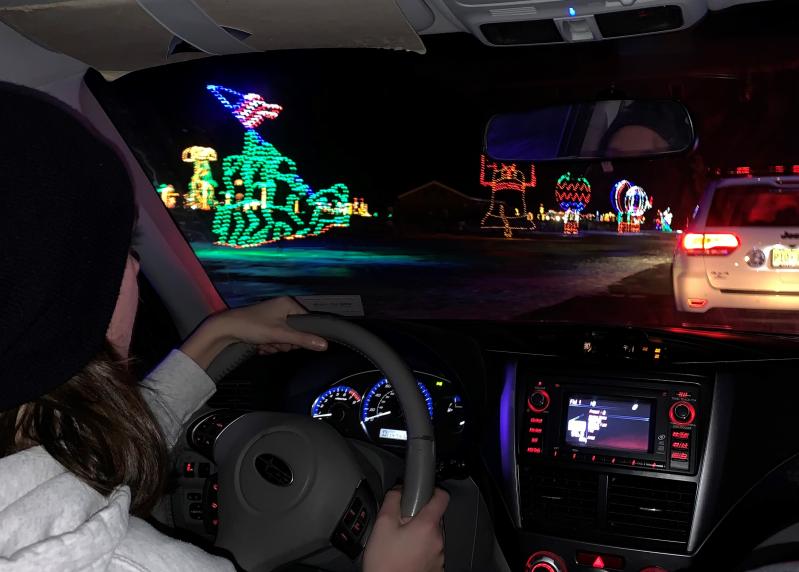 Proceed with caution at the Smith Point Light Show in Shirley, open through Dec. 30.
Julie Greene
By Baylis Greene

“Aw, look at the animatronic deer!”

That was my 15-year-old son’s sardonic take on the remarkably tame creatures milling around Smith Point County Park’s acres of pavement Saturday night at the drive-through light show put on by the Girl Scouts of Suffolk County.

The comment was astute, recalling as it did Walt Disney’s beloved automatons at his Floridian world, where negotiating the lines is an American rite of passage. And it’s true our trip there a few years ago was the last time we’d encountered a queue like this one — a mile and a half, at least, stretching bumper to bumper from the ocean dunes shrouded in darkness back across the Smith Point Bridge, meaning the line to get in easily matched the length of the tour of light sculptures itself.

But the deer. At first it seemed an anomaly, a couple of beleaguered ungulates staring curiously. After all, their home had been invaded by strange beings encased in metal carriers reeking of hamburgers and corn syrup. Then all of a sudden it was like the Yellowstone bears circa 1959; they were everywhere asking for handouts. Sauntering right up to car windows. One guy kept putting his hand out for a lick or a sniff, eliciting “And you wonder why we can’t contain Covid” from the back seat, images of hoof-and-mouth disease dancing in our heads. One well-antlered buck got so brazen, verging on truculent, that park police had to charge it in an S.U.V., cherry top flashing.

Here was holiday entertainment, corona-style: You pay your $25 (“Please, no cash”), tune in the all-Christmas-all-the-time radio station, switch to parking lights only, and proceed at a crawl through the themed displays, sporting, if you choose to accept them from the volunteer greeter, paperboard 3-D glasses for an added psychedelic touch. An exploded house, it seemed, was first up; that is, a four-poster bed standing alone on the tarmac, next to it a burning fireplace dislocated from its logical context. Farther on an incongruous ranch. Were those presents being lassoed? Followed hard by two pirate ships exchanging cannon fire. A quick tribute to Hollywood, with a bummy Santa in a Hawaiian shirt, and then a dash of nationalism, somehow inappropriate given the Pax Christiana spirit of the season.

On we rolled, my 17-year-old daughter behind the wheel. She’s thisclose to getting her driver’s license, so we let her keep going for a lesson courtesy of what must be the county’s biggest, most poorly planned intersection, north up the William Floyd Parkway where it slams into Northern Boulevard, then Route 80, the Sunrise Highway service road, Sunrise Highway proper, that last demarcated by white-knuckle clover leaf on-ramps. Welcome to Shirley.

Here’s the thing about kids. When you have them, the point of your existence is immediately justified. With some luck, you might even retain something of a life of your own. But if you can swing it so that you actually really enjoy their company, even through nine months of lockdown, well, then you’re a lucky man.