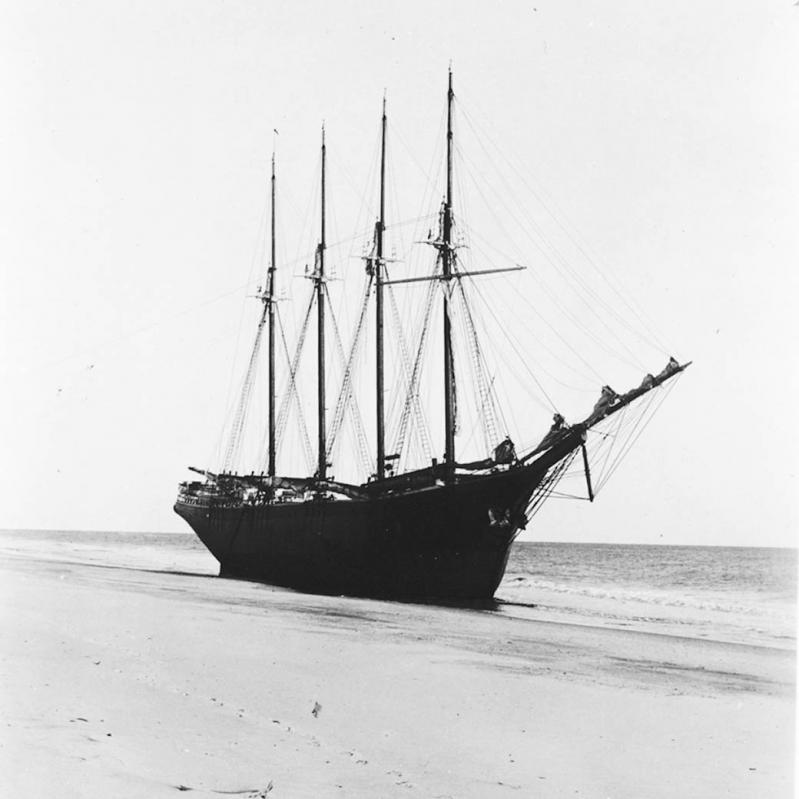 The bad-luck schooner Alice May Davenport spent the two weeks following Thanksgiving up on the sand near Smith Point. The wooden-hull Alice May Davenport was a sight to behold on the beach or on the water. It had four nearly identical masts and the same number of foresails. It ran up on the Long Island beach around Thanksgiving in 1918 and was improbably refloated intact just over two weeks later.

A photograph of the four-masted ship in The Star’s files caught my eye the other day as I was looking for a background image to put on Facebook. The photo got a fair amount of attention, so I spent a little time trying to find out what had happened to the ship, where it had come from, and what it might have carried — you know, things to do during a pandemic. Some people escape into binge-watching television or booze; I go right down a history rathole and obsess about the past.

The Alice May Davenport was built for J.B. Drake and Sons in Bath, Me., and launched in 1905. From almost the start, the 1,144-gross-ton ship had troubles.

Photographs in the Dennis, Mass., historical society show the ship again on a beach, this time in deep winter, identified as the flats of Nobscussett on Cape Cod. It is difficult to describe how big a ship it was. In one image, people standing near the bow are made like ants by the four-story hull above them.

Aside from the ice, the Cape Cod photos are strikingly similar to ours. The sails are neatly furled and the ship looks ready to go in both instances. It was eventually pulled from the Nobscussett mud and resumed hauling cargo. Shipping news of the time reported that in January 1909 it was carrying salt to Portland, Me.

On Jan. 6, 1911, it collided with the Norwegian steamer Ran in the Delaware River at Philadelphia, with minor damage. Underway again, it carried lumber from Nova Scotia to Buenos Aires that spring. It was listed as on the way from Tampa, Fla., to Baltimore carrying phosphate rock for fertilizer in 1912.

Then on Sept. 26, 1914, it was grounded again, nine miles east-northeast of the White Head Coast Guard Station at the mouth of Penobscot Bay in Maine. Once again, it was refloated and back in business for its owners.

Nineteen eighteen began with it setting out from New York to South Africa carrying a cargo that included 3,000 Gillette razors and 100,000 blades — a seven-month voyage. Gillette would have used a faster steamer, but the government had commandeered all the speedier vessels for war transportation.

According to a list of “casualties reported during the week” in a December issue of Nauticus, a contemporary periodical of the shipping insurance business, the Alice May Davenport was on its way from Boston for New York when it ran up onto the beach near the Forge River Coast Guard Station. But, once again, it was restored to the trade.

Congress appropriated $110 to repair minor damage in 1921, after the Coast Guard cutter Manning knocked off a wooden stanchion on the Alice May Davenport’s aft rail while docking in Newport News, Va. In September 1922, it arrived at Bermuda leaking after clearing Charleston, S.C., for San Juan. Sometime after that it was sold and renamed the General Leon Jurado by the Boston firm of Foss and Crabtree. Apparently, Mr. Foss liked to name his ships after people he knew. General Jurado was the president of the State of Falcon in Venezuela from 1912 to 1918. From there the rathole went too deep for me to follow and I headed home to make something for dinner.