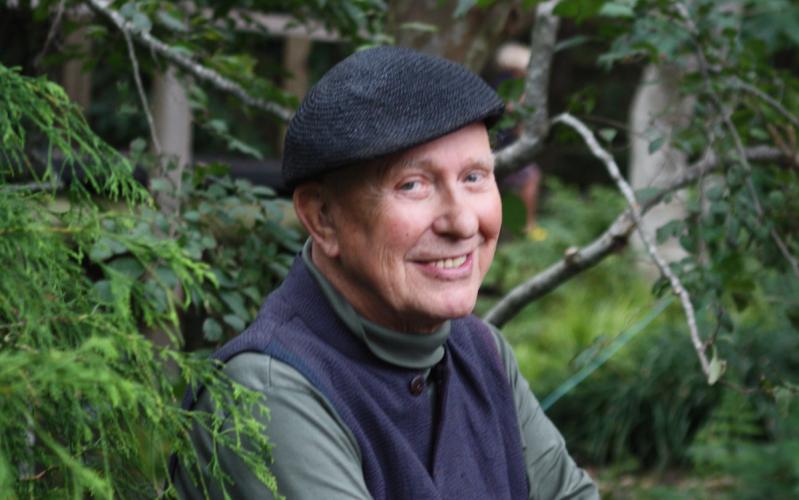 Jack Lenor Larsen, the internationally known textile designer, weaver, gardener, collector, author, and mentor to countless artists and designers, died on Dec. 22 at his home at the LongHouse Reserve in East Hampton, the 16-acre garden and arts center he inaugurated in 1991. He was 93, and Peter Olsen, his companion of 30 years, was at his side.

Mr. Larsen's career as a textile designer began in the early 1950s, when he founded his eponymous studio in New York City. Over the next 70 years, he designed thousands of fabric patterns and textiles that were manufactured in more than 30 countries. His passion for natural yarns, his innovative techniques, and his preservation of indigenous craft traditions, among them ikat and batik, profoundly influenced modern design.

His contributions to the fields of craft and design were recognized by the American Craft Council, the American Institute of Architects, the New School, the Aspen International Design Conference, and the Cooper Hewitt Smithsonian Design Museum, among others. He held honorary doctorates from the Parsons School of Design, the Fashion Institute of Technology, the Rhode Island School of Design, and the Royal College of Art and the Royal Society of Art in London.

A retrospective of Mr. Larsen's work was held in 1981 at the Musee des Arts Decoratifs, Palais du Louvre, and a second career survey, "Jack Lenor Larsen: The Man and the Cloth," traveled in 2001 from the Minneapolis Institute of Art to the American Textile History Museum in Lowell, Mass., and the Mingei International Museum in San Diego. His fabrics are in the collections of the Metropolitan Museum of Art, the Museum of Modern Art, the Art Institute of Chicago, and the Victoria and Albert Museum, to name only a few.

In a recent statement, Mr. Larsen reflected on the importance of LongHouse within the context of his remarkable career. "For a long time now, I have been a maker -- often of the less usual, and with some success. While midcentury furniture endures, my cloths are in shreds, their successful exhibits long forgotten. LongHouse, on the other hand, transcends each year more splendidly."

He first visited East Hampton in 1953, and in 1964 purchased land that became Round House, his first residence here. In 1975 he bought an adjacent property on which he planned to display art, architecture, and design. He sold Round House in 1990 and began the construction of LongHouse in collaboration with the architect Charles Forberg and the builder Joe Tufariello.

Inspired in part by a seventh-century Shinto shrine at Ise, Japan, a country he visited 39 times, the 13,000-square-foot structure was completed in 1992, the same year the LongHouse Reserve opened to the public. His friend Edward Albee called the property "a 16-acre unreality of forest, garden, and vista put together over many years by a man whose sense of what, with sufficient vision, might be, is made reality."

Jack Lenor Larsen was born on Aug. 5, 1927, in Seattle, to Elmer Larsen, an architect, and Mable Bye Larsen. He enrolled at the School of Architecture at the University of Washington in 1945, and studied furniture design; he began weaving the following year. After earning his degree, he moved to Los Angeles to focus on fabric design, returned to Seattle to study Peruvian textiles, and in 1951 earned a master's degree from the Cranbrook Academy of Art in Michigan.

Among his early commissions was the design of lobby draperies for Skidmore, Owings & Merrill's Lever House on Park Avenue in Manhattan. His fabrics were used in Frank Lloyd Wright's Fallingwater and Taliesin, and were commissioned by Eero Saarinen for his J. Irwin Miller House in Indiana. Other architects with whom he collaborated include Hugh Hardy, I.M. Pei, and Louis Kahn.

As a curator, Mr. Larsen organized exhibitions at the Museum of Modern Art, the San Francisco Museum of Art, and the Textile Museum in Washington, D.C. His many publications include "Elements of Weaving" with Azalea Thorpe, "Beyond Craft: The Art Fabric" with Mildred Constantine, "Fabric for Interiors" with Jeanne Weeks, and "Jack Lenor Larsen: A Weaver's Memoir." His most recent book, "Learning From LongHouse," was published in 2016.

He was chairman of the Haystack Mountain School of Crafts on Deer Isle, Me., from 1976 to 1981, president of the American Craft Council from 1981 to 1989, and won the Lifetime Achievement Award of the American Crafts Museum. But the LongHouse Reserve was his crowning accomplishment.

Dianne Benson, president of the LongHouse board, has said, "In a world today in which our senses are saturated with sameness, Jack Larsen is a shrine to individuality. . . . Both fluid and authoritative, intimidating and shy, possessed of a dry wit and an elegant mien, Jack was also totally unpredictable. Often, he made an appearance dressed in the most hand-woven of ethnic costumes, including astonishing hats and uncommonly beautiful scarves, and at other times he showed up in the outdoorsiest of garden woolens and boots, with everyone else primped for summer. Invariably, he had always made the best choice."

The property is a showcase for Mr. Larsen's collections of historical and contemporary crafts, including works by Dale Chihuly, who said, "Jack Lenor Larsen was an extraordinary designer, teacher, and friend. Already a legend when we met at the University of Washington while I was still a student, he encouraged me and became a mentor."

Mr. Larsen conceived the gardens that surround the house, which include artworks by Willem de Kooning, Bryan Hunt, Sol LeWitt, Yoko Ono, Alfonso Ossorio, Costantino Nivola, and many others, as well as Buckminster Fuller's "Fly's Eye Dome," the largest piece on the property.

"During the course of over 24 years of working with Jack, I learned the importance of dreaming, planning, and being open to all possibilities," Matko Tomicic, the executive director of LongHouse, said. "Each day proved to be an adventure, a challenge, an experiment, an exploration, and an opportunity to envision and to realize the warp and weft of life. . . . Jack was my mentor, Jack was my friend. He will be missed."

LongHouse's curator, Wendy Van Deusen, said, "When Jack Larsen was honored by the Smithsonian, he was very clear, acknowledging that he did not get where he is alone. Jack has always embraced collaboration. He's been my greatest teacher."

The ownership of the house and of Mr. Larsen's personal collection will be transferred to the LongHouse Reserve Foundation, which is committed to maintaining his aesthetic philosophy and expanding the public presence at LongHouse.

A memorial service will be held in the near future.

Memorial contributions have been suggested to the Jack Lenor Larsen Endowment Fund, at longhouse.org/products/the-jack-lenor-larsen-endowment-fund.