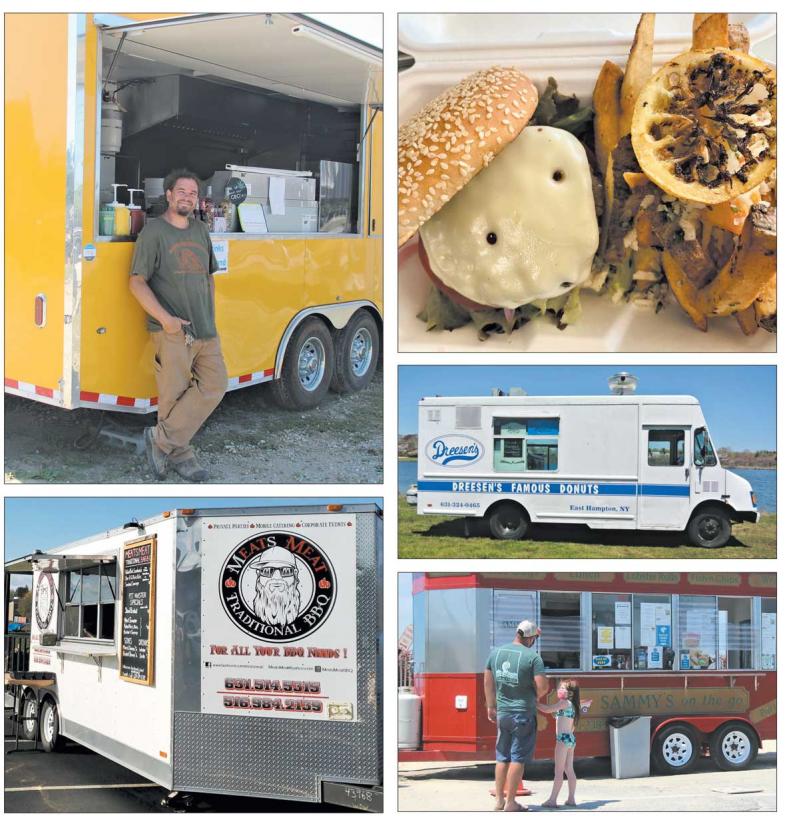 Food trucks are becoming an increasingly popular way to grab meals on the South Fork. Four truck owners dish on what makes their mobile meals special. Clockwise from top left: David Falkowski with the Open Minded Organics truck, which turns out a popular burger, the Dreesen's doughnut truck, Sammy's on the Go, and the Meats Meat barbecue truck.
Durell Godfrey
By Bella Lewis

It takes more than wheels to make mobile meals, say food truck owners. In the spirit of high summer, four food truck operators talked about what makes their trucks tick.

For David Falkowski of Open Minded Organics, professional purveyor of mushrooms, CBD products, and fresh vegetables, a commercial kitchen on his Bridgehampton farm is as much a mobile quick serve restaurant as "another way for our food and philosophy and our way to get to people and show people how to cook and prepare things we grow."

His fresh takes on fresh ingredients nod to New York Street food flavors with an eye for world cuisine like Uzbekistani grilling, Indian curry cakes, and Chinese waffles. The truck's offerings range from fried shiitakes in a gojuchang sauce to the best-selling hamburger or chicken pita plate. His foodie customers may love that his truck is "a little bit of an experimentation," but some of his clientele are also "creatures of habit" and want those basics.

Mr. Falkowski's daughter, Abby, sad to see the Sag Harbor 7-Eleven go, is not fussed tagging along to work since a new slushy machine is all systems go. The secret to the organic cantaloupe lime's flavor is a ripe cantaloupe that goes unsold at market, said her father.

Also thirst-quenching is the truck's elegant sounding "chatte," a chaga mushroom beverage that is a twist on an iced latte, made with local honey from Mr. Falkowski's plumber, Fran Schiavoni, plus hemp milk and Ceylon cinnamon, served over ice.

Mr. Falkowski sees his role as somewhat of a travel guide. "If we can create a roots destination experience," he said he'll have done his job. He has a pretty good pitch: ordering food and having a picnic on the fallow field across the street to take in the magnificent surrounds north of Bridgehampton.

For a different take on the food truck experience, there is the tried and true fried foods family affair going on at Dreesen's, out of East Hampton.

A food truck tradition, Dreesen's is making stops to cater weddings and parties in an old ice cream truck turned doughnut den. Christina DeSanti explained that the truck is outfitted with the "doughnut robot," so all the frying happens on the scene.

The patented mix for the cake doughnut, a vehicle for classic powdered sugar and cinnamon sugar coatings, has been in her husband, Rudy's, family since the '40s, Ms. DeSanti said. Specialty doughnuts are made at Dreesen's commercial kitchen when custom glaze colors are requested. Dreesen's also has the capability of going off the truck and under a tent for any event desirous of doughnuts accompanied by ice cream or hot apple cider or even summer berries with cream.

Technical difficulties are the biggest hiccup in her business, Mr. DeSanti observed. Thousands of doughnuts can be expected in one night: that's 60-65 per batch about every 15 minutes.

Larry Mondello runs the traditional barbecue food truck Meats Meats, available for hire from Manhattan to Montauk. As someone who has cooked his whole life, he is by trade a metal fabricator and a car builder -- both Mr. Fix-It and Mr. Food Truck.

In his consultancy work for other aspiring food truck owners, "The first question I ask everybody is, 'What is your menu?' Especially with the Department of Health, they want to know." He gauges whether his clients understand the recipes and how that affects mass production. Checking to make sure they don't think that they are just going to "cook everything at commissary and bring it" is also important, he said.

As the Dreesen's doughnut robot can attest, everything needs to be readied on the truck itself, said Mr. Mondello. On Meats Meat, the 9-to-13-hour smoked meat, smoked beans, and the thrice reviewed by Newsday mac n' cheese all had to be put to the test and adjusted accordingly to see if the food lasted all day on the truck's warming rack and steaming table.

"At a restaurant you're kind of guaranteed what your food traffic is and you can have 30 minutes to cook a meal. On a food truck if someone comes to the window and doesn't get their food for five to 10 minutes, people will walk off that line."

Though the food keeps all day, Mr. Mondello and his team do not keep it on the truck for long. The core team of four guys can get each order ready in 30 seconds to one minute, he said. And they are often seen as dinner and a show at the private party and catering events they roll though.

"We're a fun group. When we do big events we usually have one guy at the window yelling out orders and we'll yell them back." The crowd of diners is drawn to their joyful din and often abandon other food truck lines to check it out, said Mr. Mondello. Good food, fast service, and good old-fashioned yelling is Mr. Mondello's "no gimmicks or frills" approach to dinner.

He noted that stricter Covid times meant business was completely quiet, but once July 2020 hit, things were "absolutely insane." At the end of June last year, "the Department of Health was pushing us to go out there," since restaurants were far from returning anytime soon. He wonders if this summer can even compare to the crazy rush of the last one.

Sam Joyce of Sammy's on the Go, parked in a town concession spot in the Gosman's parking lot in Montauk, appreciates a good old-fashioned approach to service, too, and from the comfort of his trolley-style truck, to boot.

"The biggest challenge of having a food truck is it's doing just as much as a restaurant, but everything is on wheels." The Health Department must approve menus and what products can be kept on the cart, but Mr. Joyce has made things easier by carting the trolley back to the main restaurant not far away on West Lake Drive where it can be cleaned and restocked as needed, rather than have certain items lugged back and forth at the end of the day.

A bestseller at Sammy's on the Go is a crispy flounder sandwich. Lobster rolls and fish tacos are also popular. "We get a lot of tradespeople coming down for quick lunch," he said. The orders seem to follow their own popularity trends, be it an egg sandwich, breakfast burrito, gyro, Philly cheesesteak, ice cream cone, or ice cream sandwich for that matter.

After eight years on the truck, May to November, seven days a week, 8 a.m. to 4 p.m., people's reactions are still Mr. Joyce's favorite part of the job.