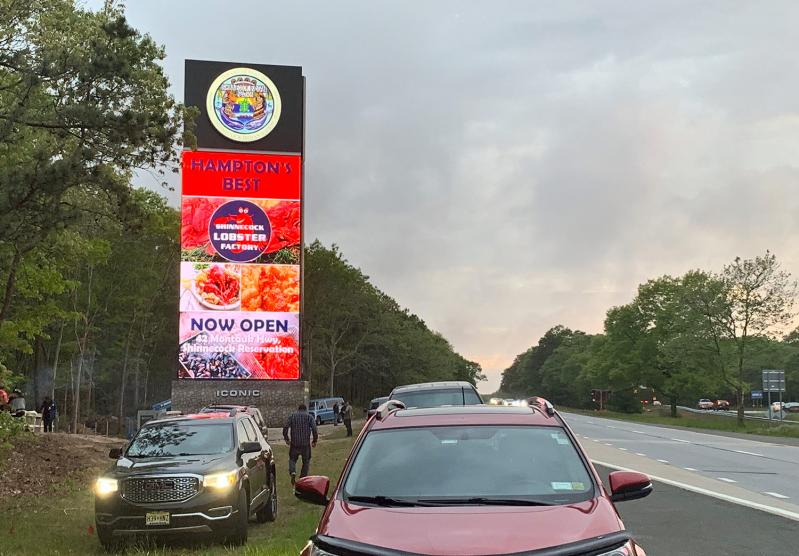 Workers made haste, and the Shinnecock Indian Nation’s new electronic billboards — at least the one on the eastbound shoulder of the Sunrise Highway — were up and running by last Thursday evening. Advertisements from Chopard, the Swiss watch company, and the North Shore Animal League, in celebration of its 75th anniversary, were emblazoned on the double-sided LED displays in time for Memorial Day weekend visitors to see them. Late Friday, the office of New York State Attorney General Letitia James, on behalf of the State Department of Transportation, filed papers in State Supreme Court requesting a temporary restraining order to prevent the Nation from completing construction and displaying advertising next to Sunrise Highway, a state road. The order was granted that same day.The state named as defendants both the trustees of the Nation and those involved in building the project. The restraining order, obtained by The Star yesterday, restricts “the defendants and all entities acting on their behalf or at their behest” from “conducting any and all activities relating to the construction, maintenance, or operation of advertising signs within the right of way of New York State Route 27.”“The state will continue to pursue whatever actions are necessary to fulfill its obligation to uphold state and federal law,” Glenn Blain, a spokesman for the D.O.T., said yesterday.The 61-foot monument holding up the 30-foot digital screen sits on what the Nation says is sovereign land. The Shinnecock Nation’s Council of Trustees on Tuesday issued a statement reaffirming its status as “one of 573 sovereign Indian nations in the United States” under federal law.“One of the inherent attributes of tribal sovereignty possessed by federally recognized Indian nations is immunity from suit,” the statement said. “Accordingly, the Nation, its officials and its agents acting in furtherance of the Nation’s authority are immune from any and all legal proceedings brought in state courts.”A handwritten note on the temporary restraining order indicates the seven defendants from the Shinnecock Nation’s Council of Trustees were served court papers at Panera Bread in Hampton Bays on Tuesday morning.The trustees called the restraining order a “thinly veiled attack” on their “right of self-determination.” The Nation has given notice to the State Supreme Court that it intends to exercise its rights under federal law. “The state has a long history of bulldozing Indian lands and Indian people to get what it wants,” the Nation said in its statement. “We will fight against this most recent effort to attack our tribal sovereignty.”According to court papers, the defendants are due in State Supreme Court in Central Islip on Friday, June 7.