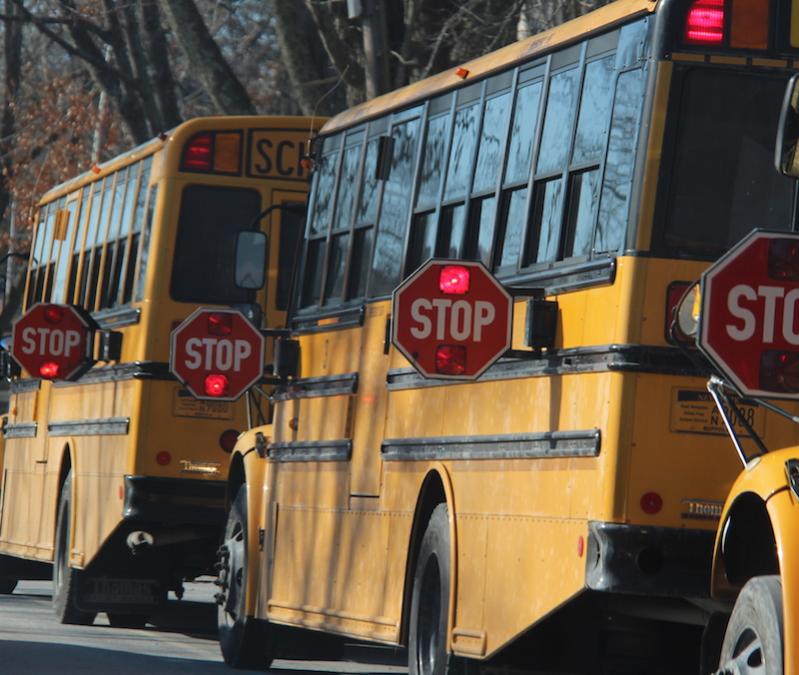 The East Hampton School District has agreed to purchase a three-acre property on Springs-Fireplace Road from the town for a new bus depot, but a lot-line modification is necessary before the sale can be finalized.
By Jamie Bufalino

The East Hampton Town Planning Board had a lot to say about lot-line modifications for a planned school bus depot on Springs-Fireplace Road at a March 13 meeting.The bus depot is proposed for nearly three acres adjacent to the recycling center on Springs-Fireplace Road. The East Hampton School District, which will operate it, had agreed to buy the land from the town for more than $2 million in 2017, but a lot-line modification is necessary before the sale can be finalized. The initial depot site was on the Cedar Street edge of the high school campus. After neighbors fiercely protested that site, the town offered up the Springs-Fireplace Road property, which once contained a scavenger waste plant.John Jilnicki, the planning board lawyer, began the meeting by attempting to set parameters for the discussion. The school district, he said, had already reviewed the environmental impact of the project and found there would be no adverse effects. Town planners had made recommendations during that process and would have no further say, he added.“The planning board doesn’t have any jurisdiction over the improvements themselves, so what you’re really left with is the review of the layout, as a lot-line modification,” Mr. Jilnicki said. He said the Suffolk County Highway Department will review the access road and the county’s Department of Health Services will decide whether to approve any sanitation system before the school district can build there. The town code says the planning board would determine whether the lot complies with zoning. That provision, as Ian Calder-Piedmonte and Randy Parsons interpreted it, allowed board members to examine far more than the layout. Taking a closer look at the environmental impact, and the effect the depot would have on traffic on the notoriously congested road, was well within their purview, they said. “If we want to leave it up to the town to make decisions with their own property with respect to zoning, I’m okay with that, but I just don’t want to pretend to give a thorough review,” Mr. Calder-Piedmonte said. He said the documents submitted with the application did not include a site map, and he called the traffic study incomplete. “We don’t have key pieces of information to decide if this is a good or bad project. We are supposed to look at an integrated plan and all improvements, traffic and safety, ingress and egress. We can’t hold this property to a different standard.”Mr. Jilnicki said the board should feel free to ask for more information before making a decision. “I don’t think anyone’s asking you to ignore any of this. Just like any other applicant, you say, ‘Here’s our concerns; get us answers on these issues,’ ” he said. Kathy Cunningham, the board’s vice chairwoman, said she wanted assurance from the school board that it would take steps to protect the groundwater before it developed the land, which, she said, had been subject to toxic spills during its previous use. The school district, Mr. Jilnicki said, had agreed to comply with the town’s building standards with one possible exception — lighting. School bus depots, he said, were periodically inspected by the Department of Homeland Security, and if federal officials request lighting that does not conform to the town code, the school district would comply.“The problem I have is really traffic,” said Randy Parsons, who suggested a comprehensive study be done to determine how to coordinate traffic to the depot, the recycling center, and nearby businesses, including a car wash proposed for land in between the entrance and exit roads to the recycling center‚ which now is before the board.   Even the traffic study commissioned by the school district, Mr. Parsons said, had concluded that the depot would negatively impact traffic flow. “I don’t think I would vote for the lot-line modification unless we had better traffic circulation coordination,” he said.At Ms. Cunningham’s suggestion, the board decided to write the town board listing its concerns. Samuel Kramer, the chairman, also asked for further instruction from Mr. Jilnicki about how much authority the planning board had over the application. He wanted to know if the zoning code makes it possible for the board to compel the town to do further traffic and environmental studies. “We’ll await further word from counsel on that so we know what we can do,” Mr. Kramer said.